Does an airfoil drag coefficient takes parasite drag into account?

Im trying to understand why does L/D MAX, (the top of the polar curve that computes CL & CD ratio for any airfoil) is also the lowest point of the total drag curve. Im guessing the reason is that CD curve is not just about induced drag as I thought.

Airfoil drag is "parasitic" (or better: everything but induced) drag.

It consists of shear drag and pressure drag, the latter mostly from local flow separation. Both are only present when viscous flow is assumed. Airfoil drag is for the wing section without taking tip effects into account, presuming an infinitely wide wing. This kind of theoretical wing has no induced drag (d'Alembert's paradox).

L/D max is the point on the polar curve where the angle to the origin of the coordinate system is steepest. This is not the point of the lowest drag coefficient! Maybe you mean the point of lowest drag for a full airplane – but that is another story, with more than just the airfoil polar. Now induced drag is part of overall drag and due to its inverse relationship with speed, a distinct minimum can be found when lift is held constant. 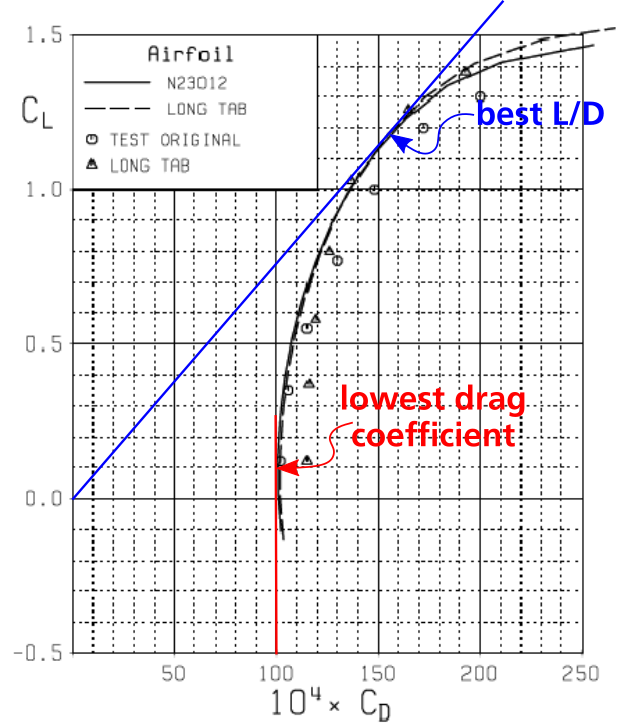 I'm trying to understand why does L/D MAX, (the top of the polar curve that computes CL & CD ratio for any airfoil) is also the lowest point of the total drag curve.

The concept of minimum Drag (as opposed to minimum Drag coefficient) can be confusing. If we are talking about a Cl vs Cd graph obtained in a wind tunnel with constant airspeed, whether for an airfoil or for a whole airplane, we could say that Drag is minimized when Cd is minimized. This is obviously not the point where the Cl / Cd ratio is maximized.

6
Is the maximum lift-drag ratio found at minimum drag?
6
What is the effect of flow separation on lift, pressure distribution and drag?
5
Does skin friction drag decrease with velocity?
3
How much of an airplane's forward energy is lost to lift?
2
Does an airfoil in potential flow produce drag?
1
How can I find the maximum climb angle of a propeller driven aircraft from a graph of vertical velocity against airspeed?
1
Can we show through simple geometry rather than formulae or graphs that the best glide ratio occurs at the maximum ratio of Lift to Drag?

11
How does hovering in ground effect (IGE) reduce drag?
2
How can the zero-lift drag coefficient (parasitic drag) be calculated?
3
Does shrouding a propeller minimize induced drag by equalizing the downwash velocity along its blades?
0
How to calculate the induced drag coefficient?
2
Blunt noses subsonic drag - why a complete ellipse?
2
Has wall to wall airfoil induced drag?
1
How do power and thrust curves compare?
1
Explained intuitively, why does aspect ratio affect induced drag?