Why would an airplane be approved for ditching?

So, the Learjet 60 that I used to fly has the following limitation: 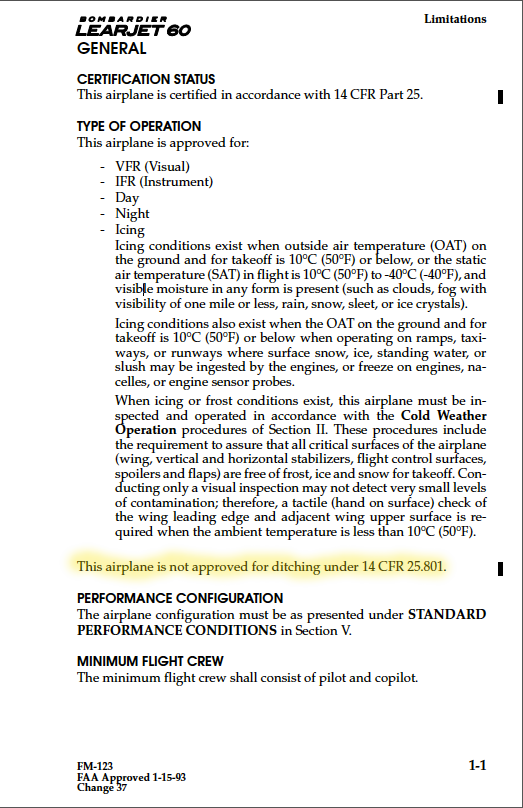 My question, is why would a manufacturer certify an airplane for ditching if it isn't required? The airplane is most likely going to be totaled anyway, right?

Or does it just mean that since it isn't certified for ditching that we aren't allowed to do it? Guess no double engine failures over water will be in my near future....

I think that 14 CFR 25.801 might sum this one up. Aircraft that are approved for ditching under 25.801 have to meet several requirements:

(b) Each practicable design measure, compatible with the general characteristics of the airplane, must be taken to minimize the probability that in an emergency landing on water, the behavior of the airplane would cause immediate injury to the occupants or would make it impossible for them to escape.

(c) The probable behavior of the airplane in a water landing must be investigated by model tests [emphasis mine] or by comparison with airplanes of similar configuration for which the ditching characteristics are known. Scoops, flaps, projections, and any other factor likely to affect the hydrodynamic characteristics of the airplane, must be considered.

(d) It must be shown that, under reasonably probable water conditions, the flotation time and trim of the airplane will allow the occupants to leave the airplane and enter the liferafts required by § 25.1415. [emphasis mine] If compliance with this provision is shown by buoyancy and trim computations, appropriate allowances must be made for probable structural damage and leakage. If the airplane has fuel tanks (with fuel jettisoning provisions) that can reasonably be expected to withstand a ditching without leakage, the jettisonable volume of fuel may be considered as buoyancy volume.

Basically, the aircraft needs to have its hydrodynamic behavior while ditching investigated, and it must then float long enough for the occupants to escape. It sounds like the Learjet 60, if ditched, is not guaranteed to either a) remain structurally sound, or b) allow the crew and passengers to get out before it slips below the waves.

An aircraft that was certified for ditching, on the other hand, basically means two things:

Not the answer you're looking for? Browse other questions tagged aircraft-limitations afm far-25 ditching or ask your own question.

13
Could Malaysia Airlines Flight 370 have sunk without leaving any floating wreckage?
6
Are airliners' pilots trained to safely ditch an aircraft?
5
What is the probability that passengers can survive a ditching in a 747 at MTOW?

11
How long can passengers survive after ditching in the ocean?
8
Why do high-speed water impacts / ditching usually result in structural loss of the airframe?
20
Why did this Cirrus deploy the parachute while ditching over Pacific Ocean?
2
How do flight crew train/demonstrate ditching evacuation?
12
Why is ditching speed higher than stalling speed?
20
Why would landing the space shuttle on water have been unsurvivable?
21
Does the ditching switch allow an A320 to float indefinitely?
22
Why don't commercial aircraft adopt a slightly more seaplane-like design to allow safer ditching in case of emergency?
1
Can the overwing exit slide be used when ditching in an A320?
8
Could a landing gear jettison mechanism be practical when ditching?