How can I find the maximum climb angle of a propeller driven aircraft from a graph of vertical velocity against airspeed?

I've been asked to find the maximum climb angle of a propeller driven aircraft from the graph of vertical velocity against airspeed: 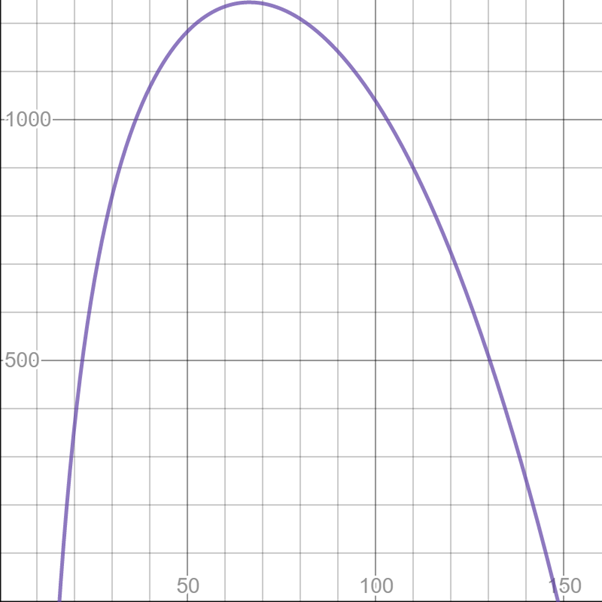 How can I do that?

All you need to do is to plot vertical versus horizontal speed using the same scale on both axes. Then the solution is the point with the steepest angle from the origin of the graph.

Of course, it helps to do this in metric units. And to add a description to the axes of a plot. The solution can then be directly read from the graph.

Of course when someone metricly assumes that one is both climbing and flying forward in m/s, that must be some airplane!

To truly be expert, one must confirm the units of climb and airspeed. Spreadsheets are indeed are helpful here, and may be programmed as follows:

For low angles of climb (non high performance aircraft) airspeed may be directly compared to vertical velocity, as the cosine of lower angles is very close to 1.

Plotting it as Peter Kampf did yields the airspeed of maximum climb angle. From the spreadsheet, this climb angle can be read.

The steepest climb angle occurs when the ratio of vertical speed to horizontal speed is maximized.

One way to find the maximum ratio of y to x on any graph of y versus x is to extend the axes of the graph to include the origin (0,0) and just run a line from the origin to any point on the curve and find the point on the curve where the slope of this line is the steepest, just as was done in these related answers: What is the typical climb angle (versus the ground) of a single engine piston plane? , Does an airfoil drag coefficient takes parasite drag into account? . Note that the line from the origin will have the steepest slope when it is tangent to the curve on the graph. Note also that the units of the graph need not be the same on each axis for this method to work. So no re-plotting is needed, just get out your ruler and start drawing. Since your graph already shows the origin (0,0), you are almost done already!

Once you know the data point where the climb angle is maximized, you can find the actual climb angle with a bit of trigonometry involving the right triangle comprised of the airspeed, horizontal speed, and vertical speed vectors. You don't have to know all three of these values-- any two are sufficient, and in this case you'll know the airspeed and the vertical speed. The climb angle will be the arcsine of (vertical speed / airspeed). Naturally, for this calculation you'll need to use the same units for both values-- a conversion may be necessary.

While you are at it, just the sake of curiosity you might want to also calculate the arctangent of (vertical speed / airspeed) for the same data point. That's the actual angle of the slope of the straight line you drew on the graph. If the two values are almost the same, that indicates that the airspeed and horizontal speed are so close as to be practically interchangeable, at least at that point on the performance curve. (As a point of trivia, it looks like if the horizontal units on your graph are knots and the vertical units are feet/min, then the angle computed with the arcsine is about 4% larger, or about 0.6 degrees larger, than the angle computed with the arctangent.)

Note that with a curve shaped like the one you've included in the question, the precision of your final answer is not going to be extremely sensitive to how well you are able to determine the exact point where the line from the origin is tangent to the graph. In other words if you vary the point of contact between the line and the curve slightly, the resulting climb angle will barely change at all. Note also that the data point you use for your trig calculation of climb angle can come from anywhere along the straight line you've drawn from the origin of the graph. You need not use the actual point where the straight line touches the curve. For example you can choose a point where the straight line crosses one of the airspeed or vertical speed indices, or where it crosses an intersection of both airspeed and vertical speed indices.

Or, if you've re-plotted your graph with the same scale on each axis, and you aren't worried about the difference between airspeed and horizontal speed, you can forgo the trig calculation and just use a protractor to measure the angle between the tangent line and the x axis of your graph of vertical speed versus airspeed. It's going to be harder to get a precise answer this way, and it may end up taking you longer. Since you've already shown us a perfectly good graph of vertical speed versus airspeed, you might as well use it via the method described here. You should be able to come up with the answer in less time than it took you to read this!

Not the answer you're looking for? Browse other questions tagged aircraft-performance propeller climb or ask your own question.

0
Maximum climb angle
6
What is the typical climb angle (versus the ground) of a single engine piston plane?
1
Does an airfoil drag coefficient takes parasite drag into account?

13
How can I get the velocity-power curve for a particular aircraft?
12
Under what conditions can the maximum angle of climb be achieved for jet and propeller aircraft?
0
How to find trim condition of a sectional airfoil without knowing the angle of attack?
4
How does a fixed-pitch propeller changes the blade's angle of attack?
15
What is the maximum take off climb angle of a Boeing 737 MAX?
3
How is maximum rate of climb defined in aircraft specifications?
2
How can I calculate the relationship between propeller pitch and thrust?