Why is the airflow in airline cabins downwards?

Temperature stratification is a vexing problem on lots of airliners. The big challenge is you need a distribution system that is effective when cooling (on the ground and at low altitude when the weather is hot) and heating (as soon as the outside temperature drops to the point where there is a net heat loss that can't be made up by passenger body heat, the ECS will be producing inflow that is warmer than ambient). At cruise where the outside temperature is generally -10 to -40C, you are in heating mode, where inflow temperature is above ambient.

The objective is to get a circulation going (air falling along the side walls, and rising at the center aisle) to keep the air mixed and prevent temperature stratification in the small space, with the added factor of a large heat emission from the passengers to cope with. Distribution systems strive to do this. 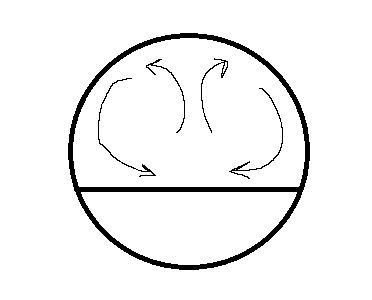 So you would think that most of the time, you want the air coming in at the floor so there is a natural convective circulation favoring heat from below (most of the time incoming air is warmer than ambient). Problem is, you have the heat of the passengers, which is significant, rising into the ceiling. You generally want to measure temperature for regulation purposes at somewhere around passenger head level, and if the heat comes in at the floor, there is a tendency for heavy stratification as the sensor is remote from the incoming heat source and it creates a very long response loop (sense, adjust, wait for the result, adjust again, etc.).

The CRJ200 suffers badly from this problem because the airflow is from Dado panels along the sides at the floor like a home heating system (a design carryover from the Challenger corporate jet, which had different distribution requirements). The temperature sensor is up by the overhead bin. When the sensor called for more cooling, or even just less heat, the Environmental Control System would dump in all kinds of cold air, which didn't want to rise being colder than ambient, so it would have to, in effect, fill the bottom of the cabin space with cold air (or really, less hot air) until the "coldness" reached the sensor up at the bin. Anyone who's ridden in the CRJ200 knows well the cold feet problem with that airplane, even at altitude where it's -30 outside. What helped a lot was moving the sensor down near the floor to the inflow region to reduce the response loop, and a modification was created to do that which was quite effective, but few airlines bothered with it and having the sensor near the floor is generally suboptimal from a design perspective.

On the later CRJ versions they went with the more common airliner arrangement. Air is injected up at the overhead bins somewhere and most of it is shot at the sidewall panels, to get a waterfall sort of flow down the sidewall panels, inboard along the floor and up the center aisle(s) (some air may also be injected into the space between the bins to prevent stagnation there). This works reasonably well even when in heating mode where the air being injected down is warmer than ambient, and allows the temperature sensor to be in a good location with a reasonably short response loop, so variations of this type of distribution system are the most common.

Not at all. Cold air tends to go low and hot air high. If the cooled air flow were pumped in from the floor, then what we would have would be customers with cold feet and hot heads, making an already miserable experience even worse.

By putting the nozzles above the head, the airline is directing the cooled air on the hottest parts of the masses of bodies crammed in the cattle-car.... err I mean airliner.

I perform much the same at my home. During the winter months when my conditioned air is pumping in heat, I adjust the baffles so that most of the heat comes in on the first floor and some on the second and a bit on the third floor. The heated air naturally rises up to the third floor.

Conversely, during the summer months, I re-adjust the baffles so that the majority of the cooled air comes into the third floor, some on the second and a bit on the first. The cooler air flows down.

Pumping the cooled air into the first floor (or floor of the cabin of the airliner) would necessitate cooling the mass of air enough so that the higher, and warmer, air mass is (eventually) also cooled. By that time, everyone's toes are cold and they are complaining.

As an addition to the other answers I want to mention that feet tend to stink - especially when lots of passengers take their shoes off. You don't want that stink to rise from the bottom to the top, where people can actually smell it, so you have the fresh air comming from the top and the stinky air being sucked away at the bottom.

42
Why do lavatories in modern planes still have ash trays?
10
Why we don't see the "SkyRider" seats in action?
10
Is there a reason Germania aircraft cabins have blue lights?
14
Why don't pilots control window shades & seat recliners?
3
Why is the temperature of the cabin so low during a flight?
8
Why do airplanes have complex air conditioning systems?
3
Why didn't Boeing make the Sky Interior for the Boeing 777?
2
HEPA filters, airliner HVAC and COVID 19