How can I estimate wind speed and direction in VFR?

I notice that I have some problems to find the wind speed and direction during flight. I am going to try to explain better: I am looking for some easy method to find the values (for example no CRP5 or too long trigonometry formula), something that can give me a fast idea from where the wind is blowing and the speed so I can anticipate the correction.

I used to do this when I was flying in the bush on floats, where there is very little time for planning and you are in a flying environment where you are living by your wits (which is what made it such great fun).

The only thing that really works to any (limited) degree, just by observation in the moment, is to look for bodies of water and observe the telltale signs of the surface winds. Wave or wavelet size, streamer markings, lee side shoreline wind shadows. Or better, smoke columns from fires.

The wind typically veers (rotates clockwise) with altitude, so if you see a lake or someone burning something that suggests the wind is blowing on it from the west, with signs that suggest it's blowing at, say, 10kts, you can expect it to be more northwesterly the higher you go, and faster. So if you guess the wind is 10kts and 270 at the surface, you can expect it to be maybe 300-ish and 20-30 kts at, say, 4000 ft.

Those are just signs that can help you make a better wild guess. In the absence of any ground signs, the only other thing you can do is hold a constant heading for a couple of minutes on a timed run between two points, and note the difference between heading and track, and difference between ground speed and TAS. Ground speed same as TAS, wind is at 90 degrees to your course (or velocity is zero), less than TAS it's forward, more it's behind. Ground speed less than TAS and significant crab angle to the left, the wind is quartering left/front. Lots of crab and minor GS penalty, closer to 90 deg off your left, less crab and more GS penalty, closer to straight ahead.

With a bit of practice you should be able to make an educated guess on direction within maybe +/- 30 degrees and velocity +/- 15 kts. With everybody using moving maps these days, these are skills that are becoming long lost.

Assuming your GPS broke! You will need to know your track(course) and groundspeed, and heading and true airspeed. Heading is easy, it's on your HSI, and if you are maintaining a VOR radial to or from a VOR, you will know your track(course), and see the drift angle on the HSI. You will then know if the wind is coming from the left or right. If it's head-on or from behind there will be no drift angle and you will figure out if it is a headwind or tailwind after you calculate your groundspeed.

To know your TAS, you will either have to use your E6B or look it up from a table. Groundspeed can be obtained from your DME, take the distance flown for 1 minute and multiply it by 60, or 2 minutes and multiply by 30 if you want more accuracy. If you don't have DME, you could ask the ATC what it is if they have you on radar, otherwise you will have to do some accurate map-reading.

The difference between TAS and Groundspeed will tell you if you have a headwind or tailwind. You can then figure out approximately where the wind is coming from and how strong it is. If you need to know it accurately, make a scale diagram such as the one below or use your E6B. 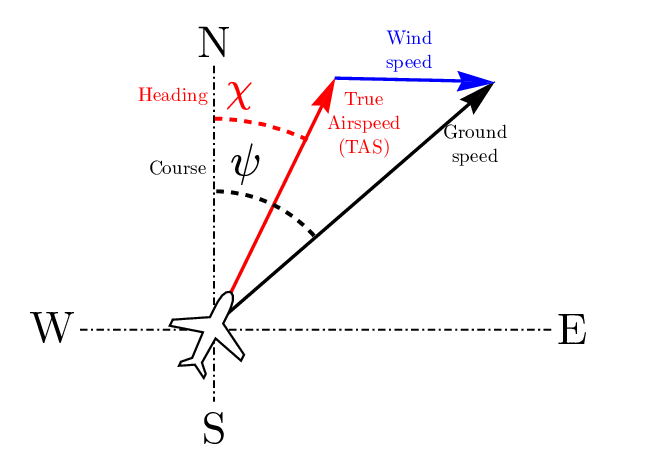 A hand-held GPS can be very useful. Holding airspeed constant, just take a few moments to turn to the heading where groundspeed is minimum (or maximum), and you'll know the wind direction and have a good idea of wind speed. If you want more precision, you can then turn 180 degrees and note the groundspeed there. This will get rid of errors due to density altitude, etc. The wind speed is half the difference between the two values. But to save yourself the time wasted in flying way off course, get the expected TAS off your E6B and compare that to the groundspeed you get flying either directly upwind or downwind, whichever involves less deviation from your intended course.

Continuing with the handheld GPS theme-- if you happen to be flying a glider in thermal updrafts, or doing a series of sustained constant-bank circles for any other reason, then when the track log screen is zoomed in to give a high resolution, the "curlicue" nature of the logged ground track will give you an immediate indication of wind direction and speed. The overall direction of the track will show the downwind drift, and the less the "curlicues" look like round circles, the stronger the wind speed.

Of course, if you have any kind of GPS on board, you don't really need to know the wind speed and direction at all; you can just observe what heading takes you where you need to go, and note the groundspeed. So I suppose your question was really intending to ask about methods not involving any kind of GPS!

Flying circles and observing how the intended center of the orbit moves can give the pilot an idea of the wind speed & direction.

6
How can the wind speed and direction be calculated from on-board measurements?
4
How does a pilot know if he has headwind, tailwind or crosswind?

3
How heading bug is calculated during cross wind and tail wind?
8
How is the wind direction and wind speed measured in flight?
6
How to calculate the wind variation?
3
How are extreme winds aloft handled and how do they affect flight?
6
How can the wind speed and direction be calculated from on-board measurements?
5
How can I overlay a VFR sectional on another map to identify features and landmarks?
4
Is any device installed on airplane to measure wind speed relative to the ground, and its direction?
1
VFR Navigation, rerouting timing corrections due to wind - rule of thumb?