How can L/D Max be both Best Glide speed and Max Range speed?

According to the book "Aerodynamics for Naval Aviators", best glide speed AND max range speed for propeller aircraft both occur at L/D max.

This is a little confusing because in an A36 Bonanza Vbg is 110 KIAS and Vmax range has been experimentally calculated by several sources to be about 125 KIAS.

So my explanation for how both of these are L/D Max is that L/D Max is a specific AOA, not a speed.

However, this brings me to my question. Obviously Vbg is power off and Vmax range is power on. Assuming that L/D max is around 6 degrees AOA, with no power the airplane is descending at about 700-1200fpm (depending on prop pitch and other configuration items) at a speed of 110 KIAS. At max range speed the airplane is level at 125 KIAS and presumably also at an AOA of approx 6 degrees.

Something seems off here. Here is what I’m having a hard time correlating: I teach that trim controls AOA, not speed. If the airplane is trimmed for an AOA of 6 degrees, adding or removing power should only change the rate of climb/descent, not the airspeed. Adding power gradually from the power off glide config at 110KIAS will eventually result in level flight AT 110 KIAS. If we wanted 125 KIAS we would have to add power while trimming down (lowering AOA) which means we are not at the same L/D Max AOA at Vmaxxrange that we were at Vbg.

I feel like I’m missing something here, so either one of my assumptions is incorrect, or there is another puzzle piece I’m missing that explains this. If we have to retrim for 125 KIAS level with added power, how can we be at the same l/D max AOA?

I'm going to answer with the caveat that I don't have as deep of an understanding of this as I would like, and someone smarter than me may be able to correct or expound on my response.

Best Glide is a purely aerodynamic concept. There is no powerplant involved, so you're simply converting potential energy (altitude) into forward motion, at a rate and L/D ratio that is driven by the angle of attack. It's a simpler concept.

On a related, but slightly different, note: Piston airplanes and Turbo(fans/jets) behave differently when it comes to producing power at different airspeeds. It's why we generally measure turbofan engines in thrust, and piston engines in horsepower. This difference is why Max Range and Maximum Endurance speeds correlate with Best Climb Angle and Best Glide speeds differently, when you compare pistons to jets.

I hope this helps.

Best L/D is a purely airframe concept, whereas best range is a wholistic system concept.

(This answer builds on @LDMax's answer)

This is the exact point on the glider polar where any faster or slower results in a shorter glide range (in still air).

However, sometimes that peak is very shallow, that is to say that accelerating or decelerating a bit doesn't dramatically change the glide ratio. In fact, that's a desirable characteristic because it means the pilot isn't trying to balance on the tip of a needle. The takeaway is that speeds above and below best L/D might also return similar, albeit not mathematically maximal, glide ratios.

Interpreting the below graph in this context is easy. The glide slope is geometrically the slope of a line starting from the origin and intersecting the polar curve. The shallower the line, the better the L/D. In the below example you can see that the curve is relatively straight after the peak and so FOR THAT AIRPLANE flying 10% faster doesn't dramatically change the L/D. 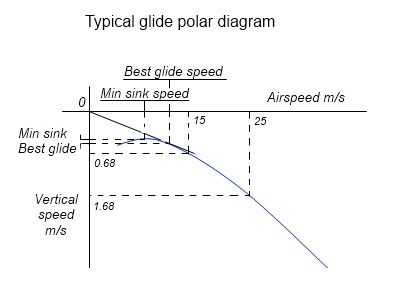 An Otto cycle engine makes peak efficiency when the throttle body is wide open and there is sufficient load to keep the engine from revving too fast. This is easy to understand, since the major efficiency loss in an engine is pumping loss. If the throttle is closed, then airflow is restricted and the engine has to work harder just to breath (imagine trying to breath through a straw). If the engine is revving high, then it's pumping a lot of air (imagine breathing heavily for minutes on end). 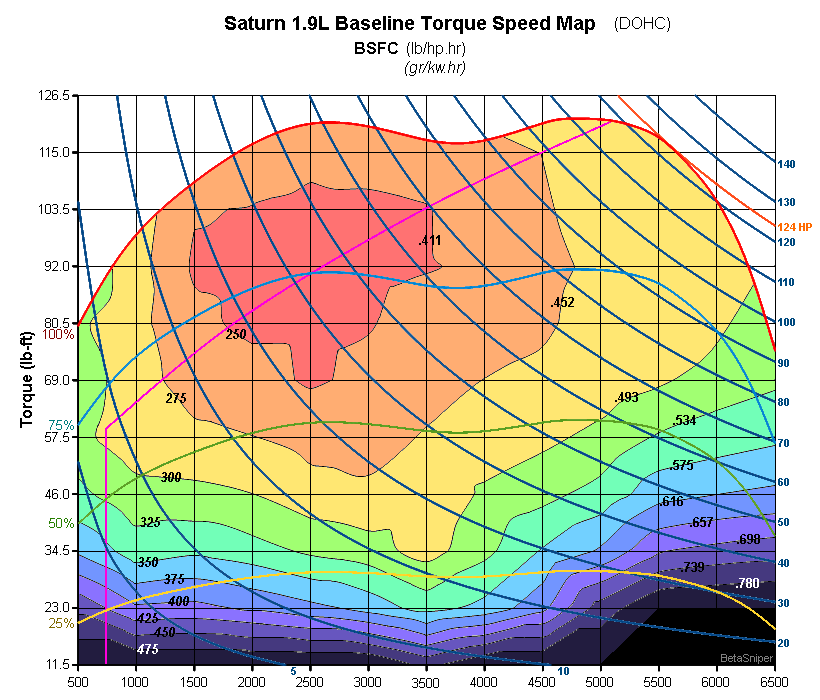 Note that the difference in peak efficiency can be substantial. Going just a little bit faster can increase the engine's efficiency by 10%.

A propeller's efficiency is a balance between slipping too much and having too much drag due to high speeds. It starts low, peaks high, and comes back very low. Constant speed props help match the best propeller RPM to the best engine RPM, but there's only so much they can do. 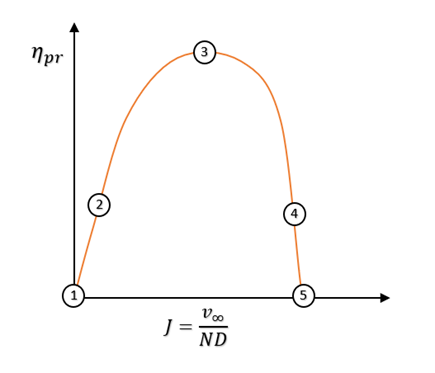 Once again, note that the difference in peak propeller efficiency can be substantial. Going just a little bit faster can increase the propeller's efficiency by 10%.

The best L/D is a question which involved only one subject, which is the airframe in a gliding configuration.

The max range is the amalgam of several systems, which have somewhat contrary requirements. So you can be overall by going a little faster, which doesn't substantially increase airframe drag but does substantially decrease engine and propeller losses.

In the case of a Bonanza, it works out to a steady-state engine and airspeed setting. However, in the case of a self-launching glider with retractable engine pylon, the best range is attained through a "sawtooth" flight pattern, which is a combination of pure glide phases and maximal climb stage. This is because 1) with the engine stowed the drag of the propeller and engine is removed and 2) when the engine is deployed it is only run at a maximally efficient climb setting.

The fact that less lift is required in gliding flight than in level flight is a bit of red herring. The difference is tiny and can be accommodated by flying at the same angle-of-attack and L/D ratio and Cl/Cd ratio but at a (indistinguishably?) slower airspeed. For all practical purposes, for reasonably efficient airframes, this effect is so tiny that any given angle-of-attack corresponds to the same airspeed in gliding flight as in horizontal powered flight. But you are right about prop drag changing the drag curve in an unpowered glide, which would shift the best L/D ratio to a lower airspeed. Also, prop and engine efficiency considerations could cause the actual best range speed to be different than the speed for best L/D ratio.

At the end of the day, due to prop and engine efficiency considerations, the idea that the still-air best range occurs at the speed for the best L/D ratio is only an approximation. On the other hand, it's always true that the still-air best glide angle occurs at the airspeed and angle-of-attack that yield the best L/D ratio for the existing aircraft configuration (which may include windmilling prop, stopped prop, feathered prop, idling prop, etc...)

The general "textbook" formula to show calculate the max range speed (at least the one I was taught), goes more or less as follows:

For a piston engine, fuel consumption is roughly proportional to engine power:

Which is minimum for lowest drag. For a given weight, assuming lift = weight, we can get:

So in order to minimize the fuel consumption per mile, we need to maximize the L/D ratio.

All of this hinges around the assumption [1], which works for an ideal piston engine with perfect efficiency.

Furthermore, as you pointed out, the relationship between angle of attack (and airspeed), and L/D ratio normally is affected by the engine RPM because of aerodynamic interference. (Also in certain aircrafts, thrust vectoring effect will significantly affect the tail lift, making the entire relationship even more complicated).

Conceptually, one would have to:

In practice an approximate answer is always fine. In your case an error of 15 kts doesn't seem to terrible.

Not the answer you're looking for? Browse other questions tagged aerodynamics aircraft-performance aircraft-physics flight-dynamics flight-mechanics or ask your own question.

16
Can gliding your plane save fuel?