I calculated that Flyer I and II (1903-04) of the Wright brothers were underpowered. Are there better (drag, lift) coefficients than those of Culick?

Based on what the Wright brothers said in a few letters and two article (all relevant excerpts have been attached to this post), and also using the experimental data in the study "AERODYNAMICS, STABILITY AND CONTROL OF THE 1903 WRIGHT FLYER - Fig. 12 Lift and Drag of the 1903 Flyer" by Fred Culick (1984), I reached the conclusions that both Flyer I and II were grossly underpowered and could not have reached the airspeeds claimed by the Wright brothers. Are there better works than Culick's with more precise drag and lift coefficients? 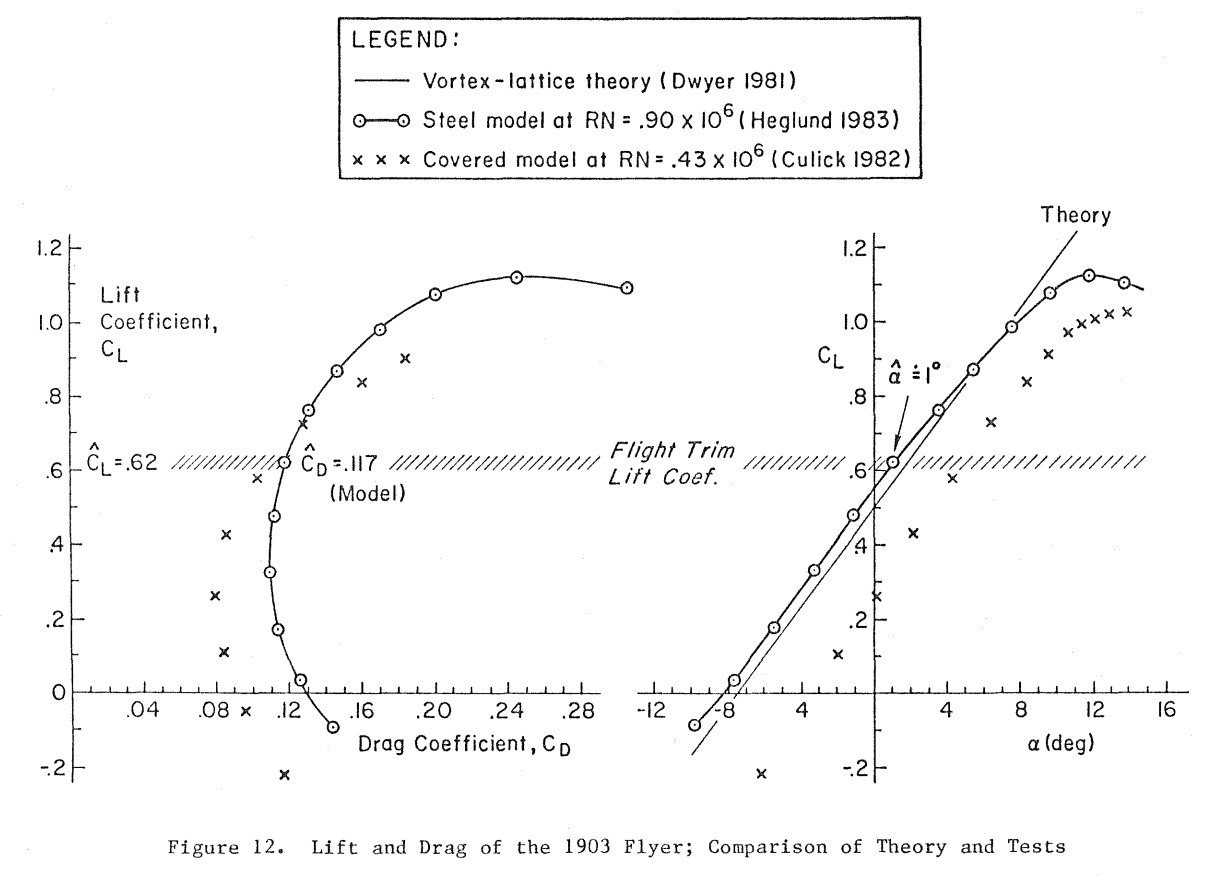 These are my calculations: 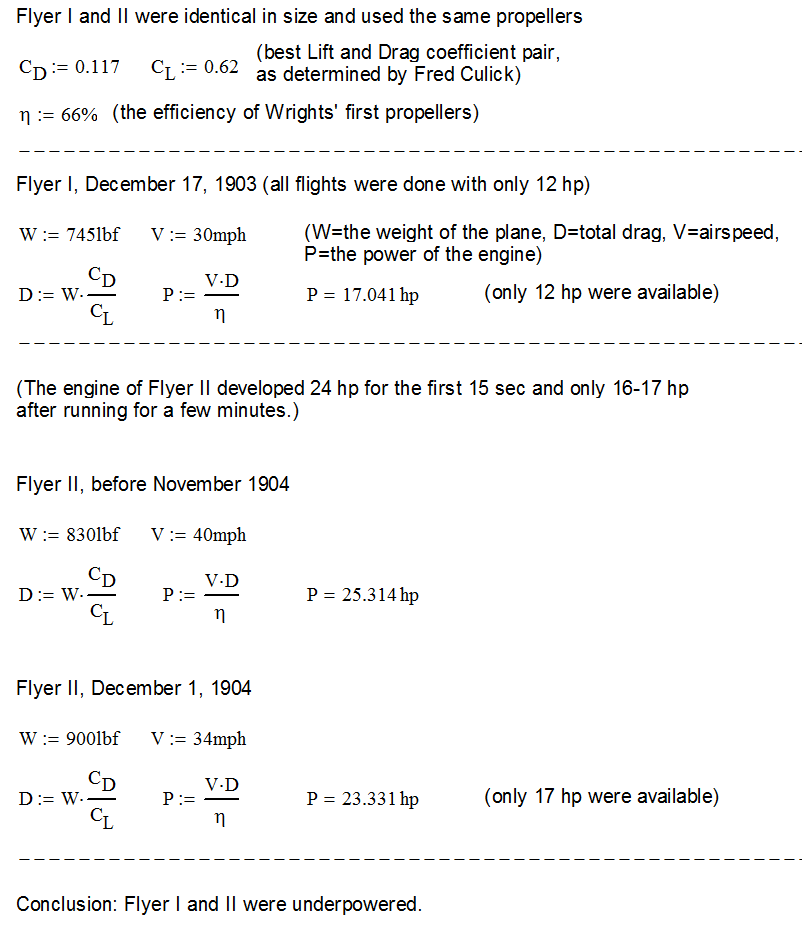 Fragments, from letters and articles of the Wrights, relevant for the question:

1904-03-14, W. Wright, “Letter to O. Chanute”, Dayton, March 14, 1904 “We are hard at work getting ready for Spring. The new machines will be of the same size as the old one but will weigh a little more, 800 lbs. probably. By gearing the engine to run a little faster we will not only carry the additional weight but will have enough surplus to increase the speed to about 40 miles an hour.”

1904-05-20, W. Wright, “Letter to O. Chanute”, Dayton, May 20, 1904. “Our indoor tests of the machinery show excellent results. With the same screws we used last year we get an increase in speed of 50 turns per minute, indicating an increase in power of more than one half. This is partly due to gearing the engine to run at higher speed per turn of screw, and partly to increase in efficiency of the engine itself.”

1904-12-21, Orville Wright, “Letter to Carl Dienstbach”, December 21, 1904, 2 pages. “The two longest flights of the season were made on the 9th of November and the 1st of December. In each of these flights we made almost four complete circles and covered a distance of a little over four and one half kilometers, at a speed of about 35 miles an hour. In the flight of November 9th a weight of 50 lbs. (iron bars) were carried in addition to the weight of the operator; in the flight of December 1st, 70 lbs.”

1907, Wilbur and Orville Wright, “The Relations of Weight, Speed, and Power of Flyers”, Navigating the Air - A Scientific Statement of the Progress of Aëronautical Science up to the Present Time - By the Aero Club of America, London, Heinemann, 1907, Printed in New York, U.S.A., pp. 6-12. “THE flyer of 1903 carried a four-cylinder gasolene motor of four-inch bore and four-inch stroke. Complete with magneto, radiators, tanks, water, fuel, etc., the motor weighed a little over 200 lbs.; and at 1200 revolutions per minute, developed 16 horse-power for the first 15 seconds after starting. After a minute or two the power did not exceed 13 to 14 horse-power. At 1020 revolutions per minute — the speed of the motor in the flights at Kitty Hawk on the 17th of December, 1903, — it developed about 12 horse-power. The flyer of 1904 was equipped with a motor similar to the first, but of 1/8 inch larger bore. This engine at 1500 revolutions per minute developed 24 horse-power for the first 15 seconds, but only 16 to 17 horse-power after a few minutes’ run. Complete with water, fuel, and other accessories, it weighed 240 lbs. The same engine, with a few modifications in the oiling device and the carbureter, was used in all the flights of 1905. A test of its power made soon after the flights of October, 1905, revealed a gain of 3 horse-power over tests made just before mounting it on the flyer in 1904. This gain is attributed to the increased smoothness of the cylinders and pistons produced by wear. The small output of these engines was due to lack of experience in building gasolene motors. … A comparison of the flyers of 1903, 1904, and 1905 shows some interesting facts. The flyer of 1903 weighed, complete with operator, 745 lbs. Its longest flight was of 59 seconds’ duration with a speed of 30 miles an hour and an expenditure of 12 horse-power. The flyer of 1904 weighed about 900 lbs., including a load of 70 lbs. in iron bars. A speed of more than 34 miles an hour was maintained for a distance of 3 miles with an expenditure of 17 horse-power. The flyer of 1905 weighed, including load, 925 lbs. With an expenditure of 19 to 20 horse-power it traveled over 24 miles at a speed of more than 38 miles an hour. The flights of 1904 and 1905 would have been slightly faster had they been made in a straight line, as were those of 1903. In 1903, 62 lbs. per horse-power were carried at a speed of 30 miles an hour; in 1904, 53 lbs. at 34 miles an hour; and in 1905, 46 lbs. at 38 miles an hour. It will be noticed that the weight carried per horse-power is almost exactly in inverse ratio to the speed, as theory demands — the higher the speed, the smaller the weight carried per horse-power. Since flyers can be built with approximately the same dynamic efficiency for all speeds up to 60 miles an hour, a flyer designed to carry a total weight of 745 lbs. at 20 miles an hour would require only 8 horse-power, or two-thirds of the power necessary for 30 miles an hour. At 60 miles 24 horse-power would be necessary — twice that required to carry the same weight at 30 miles an hour. At 120 miles an hour 60 to 75 horse-power would probably be necessary, and the weight carried per horse-power would be only 10 or 12 lbs. At such high speed the resistance of the operator's body and the engine is a formidable factor, consuming 64 times as much horse-power as at 30 miles an hour. At speeds below 60 miles an hour this resistance is almost negligible.” 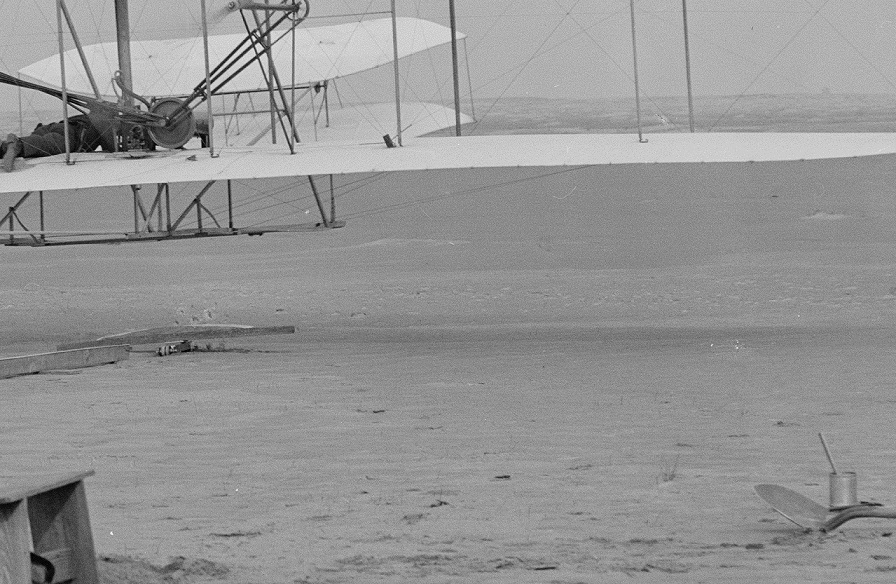 The results of a trial made on November 21, 1903, do not match the 1999 wind tunnel measurements. The discrepancy is enormous. The Wright brothers and the people at NASA tested very different planes and propellers otherwise the reported experimental data would have matched well.

I do not agree the 1999 experiments, on the full size model of the 1903 plane, gave more precise measurements than the ones obtained by Fred Culick and reported in 1984.

In the wind tunnel, the reproduced propeller fell short of T=D @ 28 mph test condition when operating at the maximum permitted speed of 340 RPM. These data are being analyzed

Saturday, Nov. 21 After many attempts to fasten sprockets we finally succeeded by filling threads with tire cement. The engine ran very irregularly, jerking the chains, and shaking the machine terribly. We discovered the trouble lay in the gasoline feed, and after fixing valve so that the vibration could not change it we had no further trouble from that source. The first test of speed was 306 rev. screw to minute (309 in 60½ sec). One cylinder made only a few explosions during the test. On the next trial we got 333 rev. in 60 sec. After dinner we arranged to measure the thrust by supporting center skids on rollers and fastening one end of machine, while we attached a rope to the other end, which ran over a pulley and carried a 50 lb. box of sand. Besides lifting the sand we got an additional pull of 16 to 18 lbs on the scales, which made the total thrust of the screws 132 to 136 lbs, at a speed of 350 revolutions per min. Our confidence in the success of the machine is now greater than ever before. Weather today was warm and pleasant with 6 to 8 meter wind from North East.

1. I have found this article:

The text was published (what a coincidence!) in the very day, May 26, 1904, when the Wright brothers flew Flyer II, near Dayton, for the first time. The article says that according to a man that worked for them and took care of their things left behind at Kitty Hawk, the two inventors hadn't finished Flyer I. In conclusion, this machine did not fly on December 17, 1903!

2. Coming back to the question, yes, there are better experimental data than Fred Culick's. They can be found in the article: "Full-Scale 1903 Wright Flyer Wind Tunnel Test Results From the NASA Ames Research Center", from which I extracted the following diagrams: 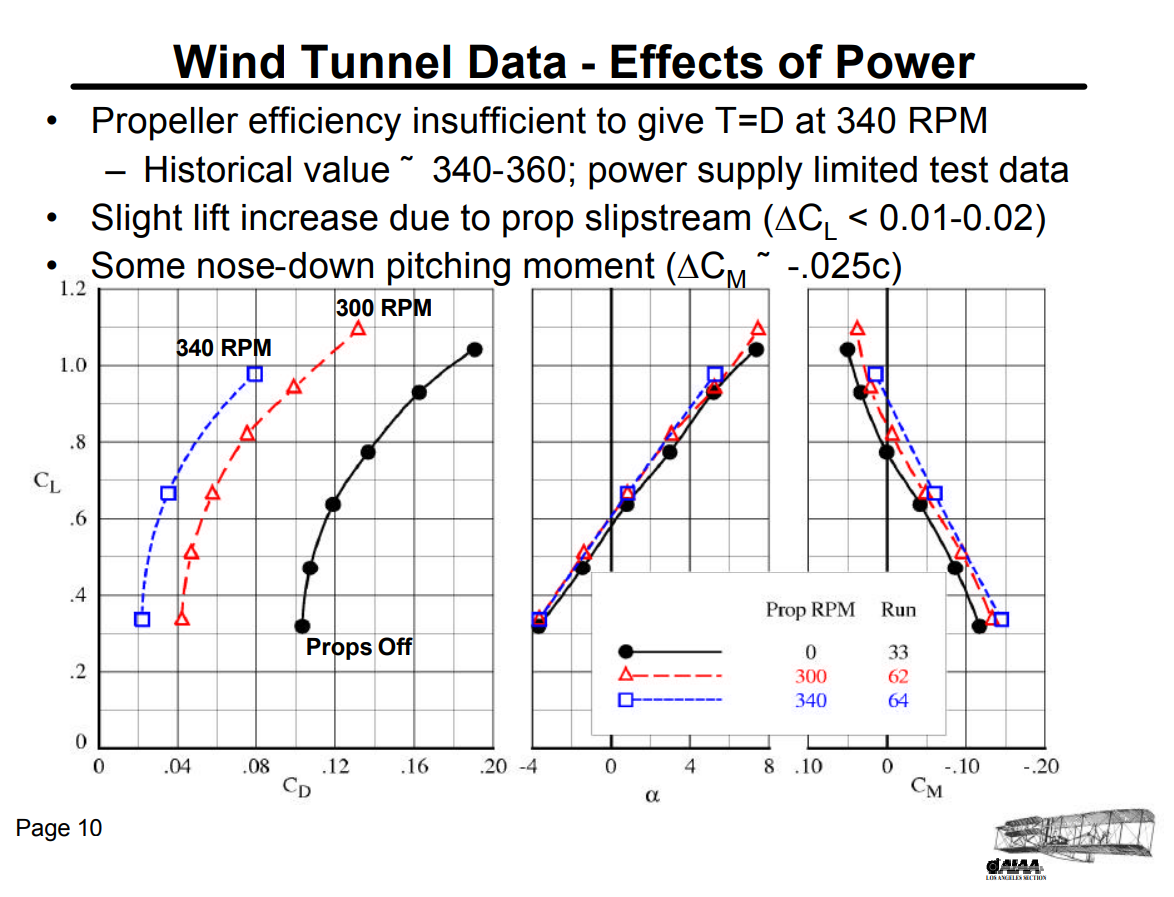 The 1903 plane was considerably overpowered if we are to trust the results of the article I quoted.

As a note: All experimental tests with models of various sizes, representing Flyer I, have as their primary source of data the 1916 replica built by Orville Wright, not the 1903 original.

4
How did Wilbur Wright create and use the formulas he mentions in his letter to Octave Chanute?
5
Does a 1lb crow expend only 7.68 Watts to fly at 37 km/h?
3
When was the first picture of the Wright brothers' 1903 plane published?
12
Is it possible for a plane to accelerate easily from 30 to 45 mph in flight while it struggles to reach 30 mph (the engine runs at constant power)?
1
Is there any clear picture or drawing, of a Wright brothers' plane, published before August 12, 1908?
2
Is there independent evidence that the Wright brothers celebrated Roosvelt's election in 1904 by a flight of over 5 minutes?