What does the autopilot do if activated in a stall condition?

I was thinking about Air France 447 recently and had a wonder:

What would happen if the pilots had re-engaged the autopilot and stopped all stick input? (If that's even possible in a stall condition). I know this has since changed, there is the MCAS system now, which will force a stall recovery. But in an older aircraft, like the A330 - 203, what would happen?

In the AF447 accident, the autopilot disconnected because of inconsistent airspeed:

Temporary inconsistency between the airspeed measurements, likely following the obstruction of the Pitot probes by ice crystals that, in particular, caused the autopilot disconnection and the reconfiguration to alternate law;

As long as the airspeed remains inconsistent, it is not possible to re-engage the autopilot:

Two ADR outputs are erroneous but different and the remaining ADR is correct, or if all three ADR outputs are erroneous but different. The AP and A/THR will disconnect. If the disagreement lasts for more than 10 seconds, the PRIM triggers the NAV ADR DISAGREE ECAM caution. Flight controls revert to ALTN 2 law. The SPD LIM flag is displayed on both PFDs, however VLS and VSW are not displayed. This condition is latched until a PRIM reset is performed on ground without any hydraulic pressure. However, if the disagreement was transient, the AP and A/THR can be re-engaged when the NAV ADR DISAGREE message has disappeared.

It is not known if the crew attempted to re-engage the AP with the pushbuttons on the FCU because this is not recorded by the FDR:

It is also impossible to see whether there have been any attempts to re-engage the autopilot.

The BEA did a study of similar incidents and found that the AP was re-engaged in some of these:

The BEA has studied thirteen unreliable indicated airspeed events involving the temporary loss of this reading, or other anomalies, for which it had access to crew reports, recorded parameters and PFR. [...]

So it is possible to re-engage the AP after it automatically disconnects due to unreliable airspeed, but these events were not fully developed stalls. Your question seems to ask about the situation later on where the incorrect manual inputs had already resulted in a stall. In these cases, re-engagement of the AP would likely not be possible due to the engagement conditions:

AP can be engaged when:

In a stall the speed or pitch limits are likely exceeded preventing autopilot re-engagement. This is a part of the FDR recording from AF447 (you can see that pitch never exceeded the 22°, but the airspeed went down to 38 kt towards then end of the flight while the F/O pitch command was at the nose-up limit): 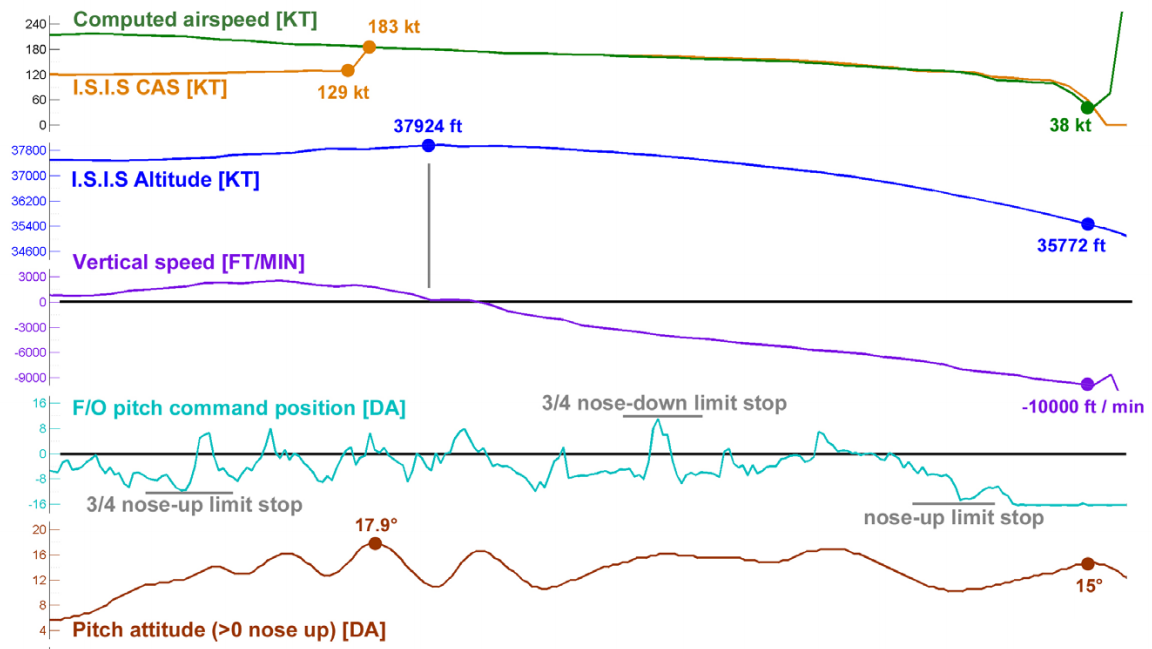 If the autopilot would re-engage successfully, it will do what it is programmed to do: follow the flight director inputs, which depend on the selected mode on the FCU (therefore just turning on the AP is not enough, one also needs to select appropriate modes on the FCU).

On just about all airplanes the Stall Protection System disengages the autopilot automatically whenever a range of parameters is exceeded. One of them is approaching stall. Generally the Autopilot will be kicked off automatically just before stick shaker onset on a traditional non-FBW airplane, and it can't be reengaged until the parameters that were exceeded (pitch/bank angles, speed, AOA etc) are back in limits.

Low speed flight at high altitude is dangerous because the recovery process requires extreme inputs to recover speed compared to down lower (mass is the same, but the air is thin) - you have to dive aggressively to gain speed so even if you could, just reengaging the AP would be inadvisable.

Since you mentioned it, I want to repeat an important point on MCAS because there appears to be a mountain of misinformation. MCAS has nothing whatsoever to do with stall recovery or stall behaviour.

It was implemented strictly to make the MAX's pitch stick force response in certain regimes match older 737s, to avoid an additional training requirement necessitating Sim time. That's ALL it was intended to do. The airplane was technically certifiable as it was when the problem was discovered (it wasn't dangerous, just different), but would have required sim training, which was considered a marketing disaster from an airline cost perspective.

Not the answer you're looking for? Browse other questions tagged autopilot stall af447-accident or ask your own question.

1
What is MCAS' purpose?

36
Why would a Cessna 182T not enter a stall?
13
Is stall recovery training mandatory for Airbus pilots?
24
Do Airbus pilots have to practice flying in alternate law?
4
Why does Airbus suppress stall warnings in certain situations?
9
What other circumstances may cause the autopilot to trip out?
4
Why disable stall warning based only on low airspeed, rather than multiple criteria?
6
Why is the A330/A340's angle-of-attack protection disabled in alternate law, even if the AoA vanes are operating normally?
31
Why are on-board computers allowed to change controls without notifying the pilots?
4
QF72: How could a disconnected autopilot change the pitch?
6
Why does an A300/310 in LAND or GO-AROUND mode have to be at least 400 feet AGL for manual control column movement to disengage the autopilot?