Is this the relationship between rpm and thrust of a Turbofan? [duplicate]

Ask Question
Asked 6 months ago
Active 6 months ago
Viewed 155 times
0
$\begingroup$
This question already has answers here:
What is the relationship between thrust and engine RPM in a turbojet? (6 answers)
Closed 6 months ago.

In this graph from the FAA Airplane Handbook Chapter 15, page 5: 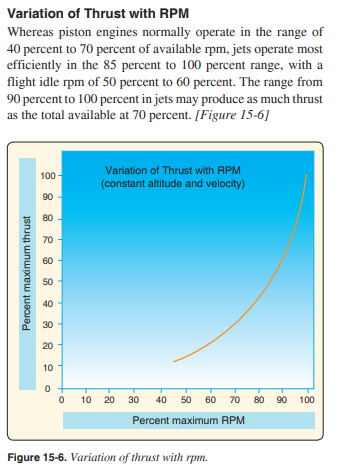 It looks like it is talking about "jet engines" but is it engine type specific or it is for both turbojet/fan/prop/shaft? It looks right about the more rpm the engine is running, the more thrust it would produce, but is the relationship shown here for jet engine or piston engine?

That is a generic graph for jet engines where most of the thrust is achieved in the high rpm regime. The meaning is simple. Thrust is a function of the amount of air the engine can ingest. Or if you wish, the number of molecules. This in turn relates to the amount of rpms and the density of the air: Thrust = rpm x density. The more rpms the more particles ingested, the denser the air the more particles as well. In a practical example: When climbing with constant thrust, the jet engine should increase the rpms to compensate the less air density. Same thing will happen when temperature increases. See below a table with N1 rpms for the CF34-10 jet engine. In order to maintain constant thrust the FADEC will adjust the rpms. 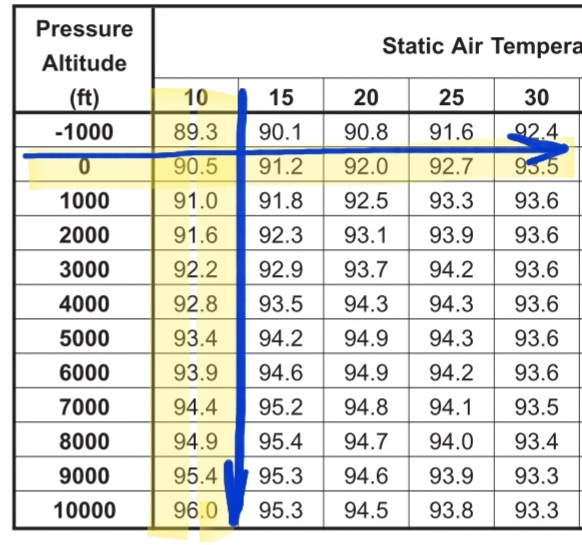 The basic way jet engine and piston engine produce thrust on an airplane is the same. They accelerate a given amount of air which in reaction provide a forward force called thrust. The faster the fan or the propeller spins, the more air it can accelerate thus increasing thrust. There is a good answer there. The reason why they don't operate at the same percentage of available RPM is efficiency. It might be true that the thrust increase with RPM for any aircraft engine, but propeller have huge losses at high speed the propulsive efficiency going down dramatically. And this is mostly due to the tip vortex appearing at the tip of each blade as you can see in the picture below. As turbofan are enclosed in a casing, those tip vertices don't develop and you have less losses. 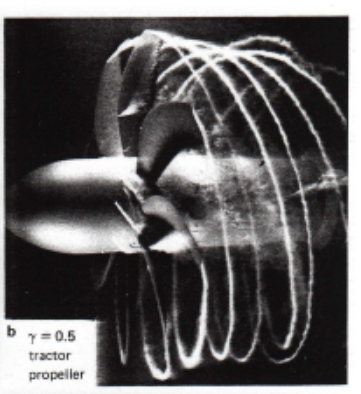 Now to your question, as you can see the curve start a 50% of the maximal RPM with a thrust rating very low. This is typically the case for turbofan where the fan design has been optimised for higher RPM. At low RPM the AOA ouf the blade is not optimal and the efficiency is quite bad.

Not the answer you're looking for? Browse other questions tagged jet-engine thrust or ask your own question.

13
What is the relationship between thrust and engine RPM in a turbojet?

2
Has a jet “engine” ever been made that only uses the thrust from the bypass air and doesn't have a combustion chamber?
3
How to realistically model propeller static thrust?
1
How do you maximize an electric engine's thrust?
4
Does the P&W F100 turbofan engine of the F-16 really produce this much power?
2
What “jet engine” is featured in this ad that Simone Giertz made for a phone?
9
Is engine sync to avoid beat frequencies also a concern for jet engines?
0
What is the takeoff thrust of a CFM56 engine?
2
How can I calculate the relationship between propeller pitch and thrust?
1
How do power and thrust curves compare?