Why would sea level static thrust have a takeoff and a maximum continuous value?

In the type certificate data sheet for a jet engine, there is this table

static thrust is the thrust generated by the engine when the plane is at rest with respect to the Earth and the surrounding air. So why would it have different values? And is the plane still "at rest" at these values?

Also, what is the different between thrust and sea level static thrust here? 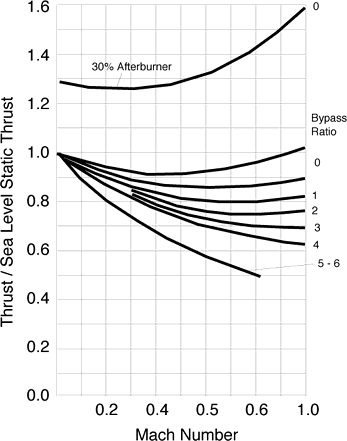 The lower chart is showing the relative decline in thrust with speed for the range of engines between pure jet (bypass ratio = 0) to very high bypass (5-6), to illustrate the impact of bypass ratio on the decline in thrust with speed. "Static thrust" is implied at the speed value of 0 Mach (airspeed is zero, so you are "Static" by definition) as a value of 1 and declines in thrust from static are a value less than 1. So you can interpret the left edge of the chart as "static thrust" and everything to the right as (moving) thrust, with the curves going down and recovering (or not) with increasing Mach #.

It's just illustrating relative effects, so with 6 engines that have different bypass ratios, their decline with speed, from the engine's Sea Level Static Thrust (whatever it is, represented by the value of 1), is shown by each curve. Following the curves as an example, the pure jet has only lost about 7% of its rated static thrust with speed at Mach 0.5, whereas the very high bypass fan has lost over 40% of its static thrust value at Mach 0.5, in the same atmospheric conditions.

Turbofans use a gas turbine core to drive the low pressure fan which produces most of the thrust by moving large volumes of air. This requires large amounts of torque which the low pressure turbine extracts from the hot exhaust gases exiting the gas turbine's core.

To develop more power you burn more fuel which means more heat. Low pressure gas turbine blades are usually rated over 2000F meaning they will melt if exposed to too much heat.

The reason for the rated 5 minutes of thrust is simply because the turbine blades will overheat causing premature wear and possibly engine failure. To produce the rated thrust the turbofan is at sea level in stationary air hence the term "static".

As the forward airspeed increases and the density of the air reduces due to increased altitude the rated thrust will go down which is not represented in the chart.

Not the answer you're looking for? Browse other questions tagged jet-engine turbofan thrust or ask your own question.

6
How does turbofan engine performance depend on speed and density altutude?
4
Does the P&W F100 turbofan engine of the F-16 really produce this much power?
3
How does the power distribution change for a turbofan engine from being stationary to going at full speed?
3
From which stages is the bleed air from a GE90?
5
Do surfaces ahead of propellers decrease thrust?
2
What integration of aircraft propulsion would be more efficient at sea level high speed flight? A turbofan, unducted fan or a turbojet?
2
Why can’t the newest high-bypass turbofans run at their EPR, temperature, and RPM limits simultaneously at sea level?