Runway width becomes a problem for some taildraggers when it gets to be less than 35-40 feet because of the lack of visibility.

Sure. When you can't see the centerline, it's nice to have some lateral margin of error.
But later in the article (p. 74) in the caption of an overhead photo of a small airplane on a runway seven times wider than its wingspan, he writes

Oddly enough, super-wide runways can cause as many problems as very narrow ones, especially for taildraggers.

What might such problems be? (Not wandering into the grass. Even if you can neither look over the nose nor locate the runway's edges, if during takeoff or rollout you drift to one side, wouldn't you still notice the center stripe or the edge or the lights in time to correct?)

Do any NTSB reports mention a too-wide runway as the cause of an incident?

The issue has always been human perception. Pilots are tasked with trying to make great landings. One way they do that is with peripheral vision. If the runway is too wide, they lose that extra clue on when to roundout and flare. They may flare too early and stall the aircraft too high above the runway. This perceptual clue is more important for tailwheel pilots than tricycle gear pilots.

(a) Various surface features and atmospheric conditions encountered in landing can create illusions of incorrect height above and distance from the runway threshold. Landing errors from these illusions can be prevented by anticipating them during approaches, aerial visual inspection of unfamiliar airports before landing, using electronic glide slope or VASI systems when available, and maintaining optimum proficiency in landing procedures.

(b)Runway width illusion. A narrower‐than‐usual runway can create the illusion that the aircraft is at a higher altitude than it actually is. The pilot who does not recognize this illusion will fly a lower approach, with the risk of striking objects along the approach path or landing short. A wider‐than‐usual runway can have the opposite effect, with the risk of leveling out high and landing hard or overshooting the runway.

When landing an airplane you get used to visual reference points to evaluate your position relative to the ground. Optical illusion are therefore quite common.

On a very wide runway you might flare too early and even stall the airplane a few meters above ground. Taildraggers are quite tricky at landing in those condition as you don't want to overshoot the 3 points pitch attitude of the aircraft or you will hit the tail first which is not designed to handle it.

The opposite might happen on narrow runway for nose wheel plane where you might miss your flare and touchdown with the nose gear first who might collapse under you. This risk adds obviously to the risk of hitting ground obstacle while flying a low approach. 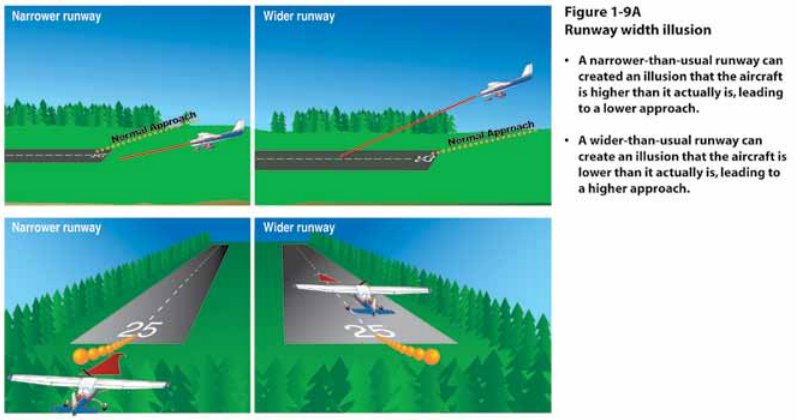 As a pilot, switching from my training on a 50 ft runway to landing frequently on a 150 ft wide runway was slightly challenging.

Looks closer on final and you will tend to float and flare high.

Looks farther away on final and you will tend to approach at a higher rate of descent.

Not the answer you're looking for? Browse other questions tagged landing runways tail-dragger ntsb or ask your own question.

6
Why is the minimum runway length non-linear in relation to the landing weight?
4
When is runway slope most important?
19
How heavy is too heavy to land on a grass strip?
32
Why can't runway 18 at Frankfurt Airport accept takeoffs or landings in the opposite direction?
15
For what reasons might a taxiway be mistaken for a runway?
14
Why don't light-up runway numbers similar to runway lights?
7
Why are taildraggers considered more rugged than tricycle?
31
Does runway 32/33R at Madrid actually have a kink in it?
7
Are tritium runway lights widespread in remote areas?
63
Why are Gatwick's runways too close together?