Is there ground effect flying below an infinite 2D plane as opposed to above one?

People talk about wing tip vortices and say things like the ground acts as an aerodynamic mirror. What (if any) difference would there be for a wing flying underneath a 2D plane? As in the picture below: 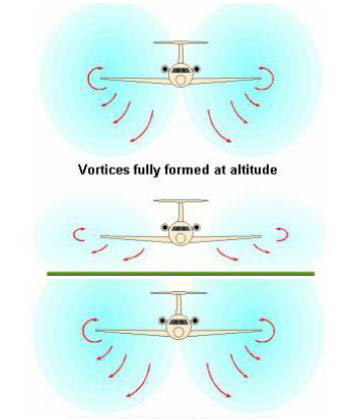 The uppermost plane is flying at an altitude well outside ground effect. The middle one is flying in ground effect, and the bottom one in the hypothetical situation with a plane on top of the plane (pun intended).

Source of the picture, edited to suit the question: http://www.aerospaceweb.org/question/aerodynamics/q0130.shtml

In computational fluid dynamics (CFD), ground effect can be simulated by flying two airplanes / wings in mirror formation (the lower one inverted).

That mirrored wing is only a mathematical trick. By distorting the flowfield in an identical, albeit inverted, way, the effects of the lower wing cancel out those of the upper wing in the plane of symmetry, and vice versa. This way, the flowfield on both sides looks exactly like one where the plane of symmetry cannot be crossed by the flow, just as the ground cannot inhale or expel air.

Now, with the more precise description: Yes, there is also a ground effect for the plane flying below a hypothetical ceiling. Of course, it would help if the vertical tail would not stick up, for minimum distance and maximum effect. Just as the ground stops the downward movement of the wake, a ceiling will prevent air from filling the space left by the downward movement of the wake, so the wake will stick to the ceiling. Call it the ceiling effect, if you will. In both cases the induced drag drops and the center of pressure moves a bit backwards. I wager to predict that the drag reduction over distance relative to wing chord is the same as in "regular" ground effect.

Proof: Fly a model helicopter indoors and get it up to the ceiling. You will notice that it will get stuck there and needs much less power to stay airborne. The rotor blades are like wings, and due to the rotor position on top of the craft, the ground effect is very noticeable. In order to get the helicopter unstuck you must reduce power a lot, such that the helicopter will drop like a stone.

In CFD, this can readily be proven by using the trick described above, only now with both wings / airplanes flying inverted to their original orientation for the ground effect calculation.

The situation with the ground above your aircraft is very similar to F1 cars front wing. And even if the airflow around it is much more complicated than the airflow around and airplane wing, ground effect seems to have a great impact.

The front wing is inarguably the most important part of a Formula 1 car, despite only providing between 20 and 30% of total downforce it is responsible for the quality of airflow reaching the rest of the car; generate too much downforce from the front wing and rear downforce will be reduced. Too much upwash in the front wing wake can stall the suspension members, or even cause the flow to separate at the front edge of the sidepod, which can adversely affect the rear wing and diffuser.

While the front wing profiles are shaped like a conventional wing section, a cambered upper and lower surface producing downforce, its force characteristic are dominated by ground effect, namely the Venturi effect in the convergent-divergent path under the wing, such that the air flowing on the lower surface of the wing is multiple times faster than would be the case is the wing were suspended high in the air.

17
How high does the ground effect last?
12
Can a helicopter operate continuously in a small, enclosed, sealed environment?

5
How much effect does the ground have on flight control when flying low?
5
Can we borrow Formula One's ground effect for airplanes?
8
When leaving ground effect, why is there a nose-up change in moment?
2
What is the difference between ground effect for an infinite wing and for a finite wing?
2
Is flying in ground effect dangerous?
2
Are there any plans, designs, or prototypes for an electric ground effect vehicle?
0
A question about the exact meaning of one British usage of the term "Angle of Incidence"
0
Why is the critical angle of attack lower in ground effect?