Can the load factor during glider winch launch be measured with the G-meter?

I am looking at the flight envelope of a glider, the velocity - load factor diagram. I read that generally the air-frame, the G-meter and the pilot 'experience' the load factor as a G force (an acceleration).

My question is whether that is always correct. I think of a winch launch and believe that in this phase, because of the cable, the the G-meter and the pilot do not 'experience' the load that the air-frame has to deal with. Or in other words, there is load on the air-frame which is not due to acceleration. But I do not clearly understand the physics of the launch phase.

The question is important to me because if my believe is correct then during launch the pilot cannot judge the stress on the air-frame by the G-force he/she feels.

You are absolutely correct.

Since a string can only transmit tension forces (and no shear or compression force), the direction of the tow cable near the glider directly indicates the direction of its force. In the late phase of a winch launch the tow cable is pulling mostly downwards and has only a small forward component left. As long as the ratio between forward and downward component is still larger than the gliders lift-to-drag ratio, staying in the launch still adds energy to the glider, so a glider launch ends only when the cable shows an almost vertical direction.

All tow cables have a weak link at their glider end which limits the loads than can be transmitted. The picture below (source) shows a collection of color coded weak links with different limit loads (note the different center hole sizes), the strongest one being 10,000 N, mostly used for two-seaters. 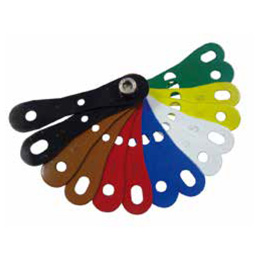 The picture below (source) shows how the weak link is integrated: It sits in a U-shaped sleeve and is connected to the rest of the cable by shackles. On the right you see the rings which engage with the hook on the glider. In this particular case two weak links are used, and one has oblong holes at both ends so it can act as a fallback if the first snaps from some sudden jerk. Most tow cables have several of those weak links at their end and the appropriate one is selected depending on the glider type.

As you say, the load on the tow cable must be added to the weight of the glider to determine the lift force the wing has to produce in the late phase of a winch launch, which can easily be twice the weight of the glider for a total of 3 g. All while a g meter in the cockpit will read only less than 1 g (less because the glider is still climbing, with a nose-up pitch attitude). The pilot can only guess the load on the airframe, judging from indicators such as the wind noise, the stick force or the airspeed instrument. Another indication would be the sudden jump the glider performs when the cable is disconnected when still at high load. That happening, however, depends on the style of the winch operator.

When sitting in the winch on the ground, this load can be felt: During the launch the whole winch (normally a truck with a second engine and spools mounted at its back) will be lifted up a bit and drops back into its suspension when the tension on the cable is released. Still, this load is much less than the safe load the glider has been certified for which is 5.3 g for most modern gliders (see CS-22.337).

While the cable load is not dangerous, a more critical moment can occur during lift-off:

At the initial phase of a winch launch the force on the cable, acting in horizontal direction and at the bottom of the fuselage, creates a mostly horizontal acceleration and, in addition, a pitch-up moment which can stall the glider if not counteracted by elevator lift. Especially gliders with a fully-flying horizontal tail suffered crashes when their tail was still stalled during lift-off due to an excessive angle of attack on the tail. Therefore, it is important to keep the stick neutral and only push it forward when the glider raises its nose too quickly. The worst is to pull too early: A low-level stall will follow with the risk of an unsymmetrical wing stall, followed by a half roll and violent ground contact soon after.

If you are interested in the physics of winch launching: In 2008 a thesis has simulated the launch of an ASK-21 and describes what happens in detail.

Not the answer you're looking for? Browse other questions tagged aircraft-physics glider load-factor or ask your own question.

7
How should I deal with a cable break at low level during a glider winch launch?
3
Does Buoyant Lift Force scale with Load Factor?
14
Why do aircraft have a crossover airspeed, and why does it increase at higher vertical load factors?
2
What is the effect of the Load Factor on wing Structures?
15
Are glider winch launches rarer in the USA than in the rest of the world? Why?
5
Would all these three things have the exact same effect on the flight duration of a glider?
1
How does the load factor vary when the aircraft pitches up/down?
1
Forces "felt" by pilot, G-meter, inclinometer--are they the aerodynamic forces generated by the aircraft, or the sum of weight+centrifugal force?
4
How to properly compute the stable vertical path load factor