What information is recorded in aircraft sensor and maintenance logs?

I was wondering what the sensor and maintenance logs in an aircraft look like and what are the values logged? Like maybe the engine temperature, altitude, exhaust temperature, etc. I know the data is logged in the black box, was wondering if it is available to the owner of the aircraft to any cloud service for further analysis or something. I'm talking about fighter planes and commercial aircraft.

I am looking for variables like the speed of the turbine (N1 and N2), altitude, pitch, roll, vertical acceleration, air temperature, exhaust gas temperature, etc. Came upon a Vox video where they showed about 60 variables.

For the F-35, it captures possibly too much. Not just every aspect of the physical operation of the jet, but all the other things the jet can do.

Capturing details on all the radar and sensors that may be trying to track it, route, speed, altitude, G's etc, etc.

The specific details of what is captured and available for download is not generally public info.

The Autonomic Logistics Information System (ALIS) system is going away, to be replaced by Operational Data Integrated Network (ODIN) in late 2020.

The Pentagon says that a replacement for the F-35 Joint Strike Fighter's long-troubled cloud-based computer brain is finally coming. The U.S. Air Force, Marine Corps, and Navy have said that the existing system is one of, if not the most significant factor in the abysmal mission capable rates for their respective F-35 variants and a major contributor to the growing sustainment costs for the aircraft. Unfortunately, the upgraded system is not expected to be in widespread use until 2022 at the earliest.

Modern digital Flight Data Recorders can capture hundreds of channels of data. Exactly what is being captures is specific to that operator and that fleet, and I don't know that there is any public source document that enumerates everything that "this" type of aircraft at "this" operator is logging. One example, though, starts at page 6 of this report an American Airlines flight 77 on 9/11/2001, and runs for hundreds of entries.

You can probably assume that at a bare minimum, the positions of the flight controls (stick or yoke, rudder pedals, throttles, flap and gear and speedbrake levers, etc) in the cockpit are captured for every aircraft, along with the positions of the flight controls themselves (each aileron, flap, speedbrake panel, elevator, rudder, etc) and also the indications of at least every engine parameter that the crew can see, probably plus a few others. Also, GPS position, along with INS position, speed, and acceleration are probably a safe bet; some amount of FMC data such as the active waypoint is probably in there too. Also the various system inputs like doors open/closed and weight-on-wheels.

One of the best ways to see what's out there in this realm is to go through NTSB accident reports; those often have "traces" of the various data over time, and by looking through that you can see exactly what was being captured on a particular accident aircraft. (For an example, start at page 20 of the AA77 FDR report.) Or, more likely, you'll at least see a subset of everything being captured. If the engines were running fine, you may not see extensive logs of normal performance, while if an engine problem was relevant to the accident, there will be more attention on it.

At the most detailed level, the data is captured as ones and zeroes, and how it's displayed afterwards is all a function of what software is doing the playback. And that, again, will depend on what the military service or airline or investigative body bought & uses. Again, looking through NTSB reports and briefings, it's common to see animations both of cockpit displays ("so at this point in the flight, the crew was seeing this and moving the controls like that") and the aircraft performance in 3-dimensional space. The display of traces is a less-enhanced version of that -- various defined data outputs down the side, and time running across the top.

The NTSB report on Atlas Flight 3591 also has various traces starting at page 7 of the linked PDF file; this is a screen shot of the first of those pages: 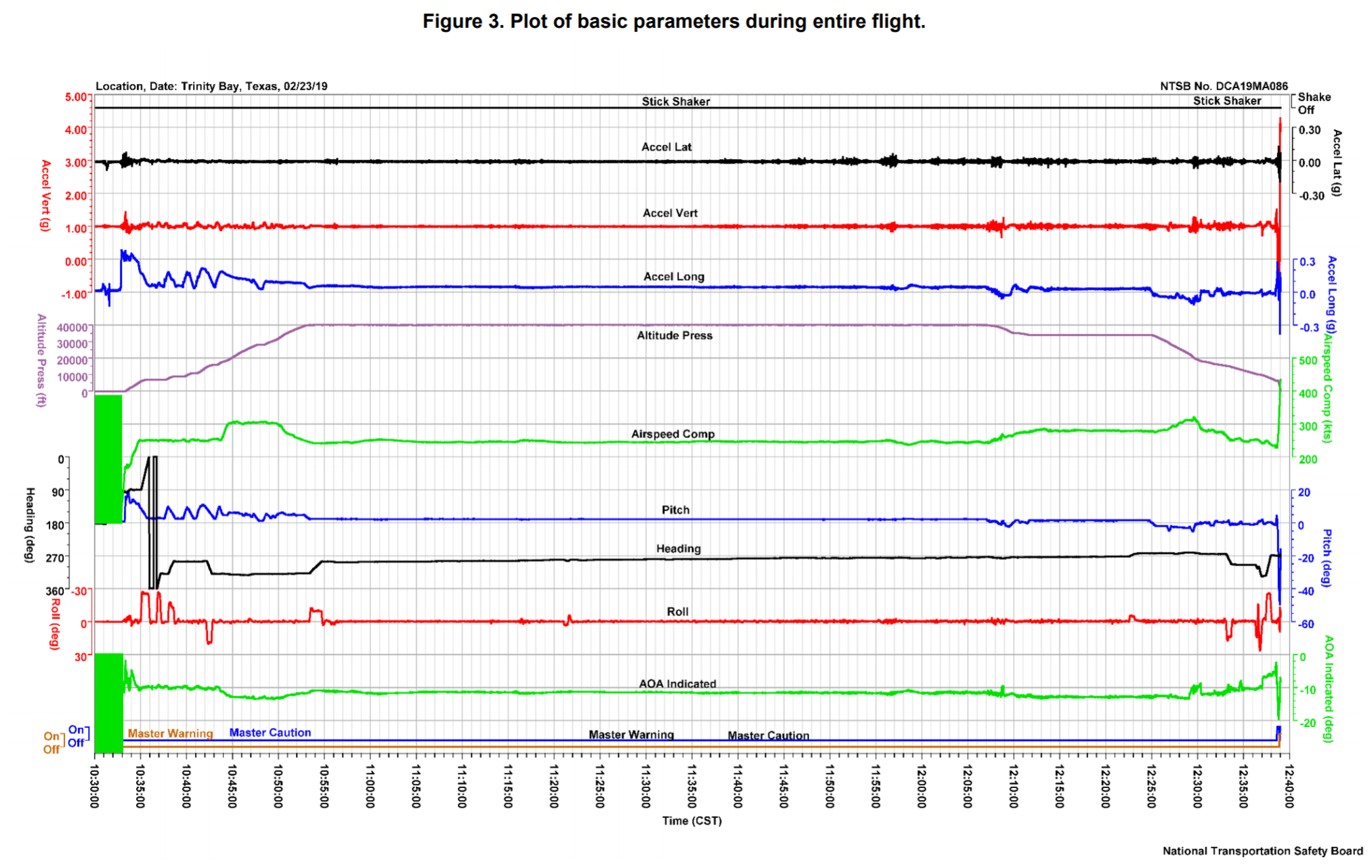 Not the answer you're looking for? Browse other questions tagged airliner aircraft-maintenance aircraft-systems fighter or ask your own question.