Does the F-4 Phantom use (have) differential horizontal tail deflection?

Is differential horizontal tail deflection used to roll the aircraft around the longitudinal axis along with the ailerons / spoilers and a bit of rudder?

No, the two sides of the Stabilator are connected to one another and move in unison. The following is from the USAF F-4E flight manual, page 1-21. 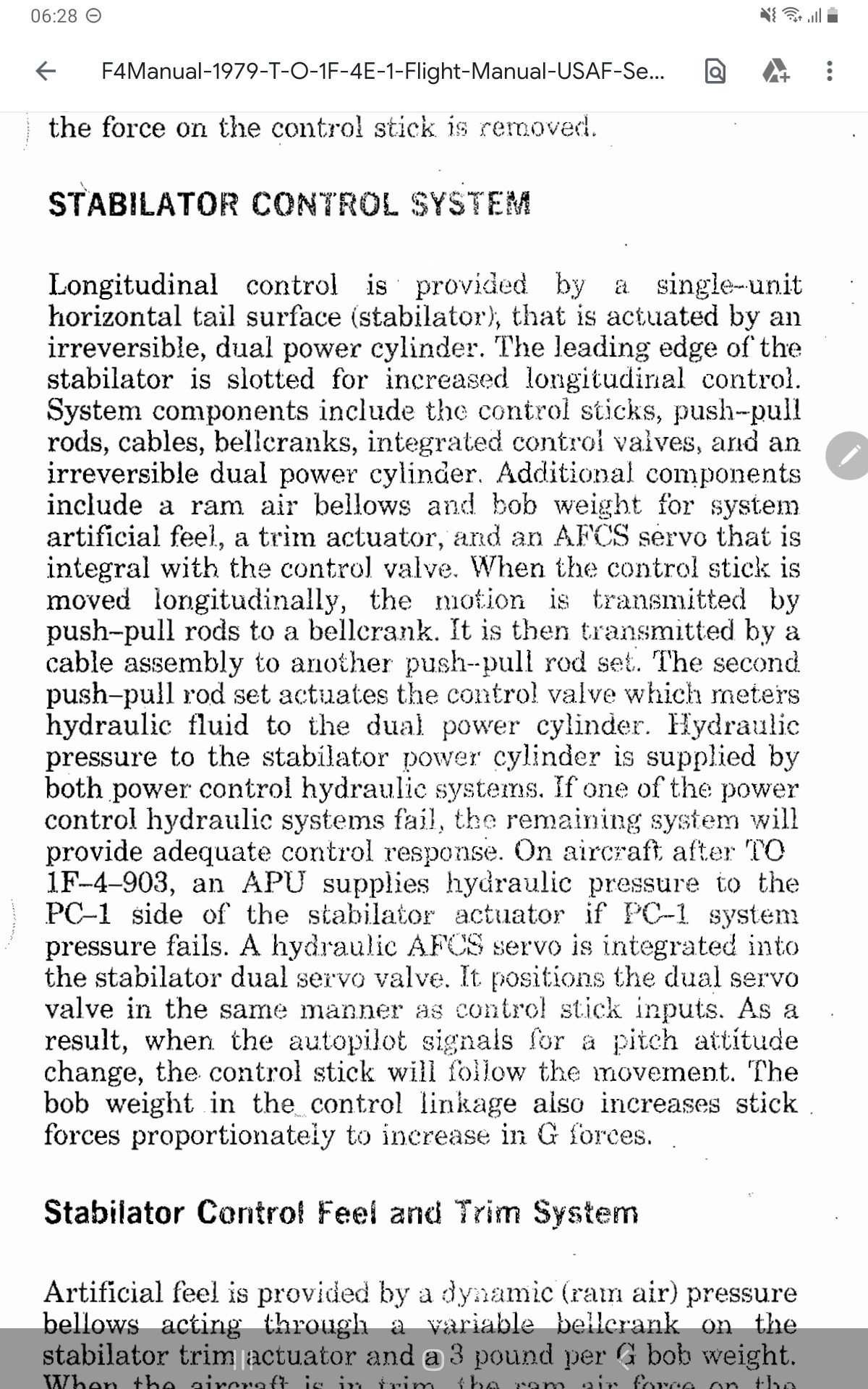 F-4 pilots were trained to use the rudder to roll the aircraft at higher AOA. Instructors were trained to emphasize this flight characteristic, and, whenever at high AOA, to keep our knees in the back seat right up against the control stick to inhibit new pilots from introducing any aileron.

...pilots originally trained in aircraft like the F-4 were taught to roll at high AOA with rudder commands rather than lateral stick commands to avoid departures [from controlled flight] due to adverse yaw from ailerons and differential tails.

No. The only movement I saw out of the tail when crews checked controls was both sides in unison,for rolling will definitely use rudder at higher AOA.

Not the answer you're looking for? Browse other questions tagged aircraft-design military flight-controls cockpit f-4 or ask your own question.

10
Do fighter jets use elevators as ailerons?

28
Why does the DC-10's horizontal stabilizer have such a pronounced dihedral?
2
What are the mechanical deflection angles for Airbus side-stick controllers?
14
Why do aircraft have a crossover airspeed, and why does it increase at higher vertical load factors?
3
Why don’t airliners use stabilizer movement to assist with large pitch control inputs?
7
Why does the A320 use the rudder for lateral control in mechanical law?
7
Does fly-by-wire permit smaller tail fins (area and thickness) for jetliners?
5
Why do the A320’s primary flight controls have hydromechanical backups only for the rudder?
15
How controllable is the 737 in single-engine manual-reversion flight? Is it controllably landable (or go-around-able) in this condition?
0
If pilot use rudder to roll the aircraft at high AOA in the F4 Phantom then one aileron from one wing and one spoiler from other will be deflected?
1
In theory, can jetliners remain controllable after losing the entire tail section?