Why so much throttle work on navy fighter during final approach?

• Look at his left hand: why so much throttle work while flying? What is he doing?

• Is the throttle response very slow? It seems to me that the fighter don't accelerate so much when he gives full throttle.

• I read that landing on carrier is extremely difficult, does that mean that navy fighter pilots are even more skilled than acrobatic pilots (Red Bull Air Race)? Or is this a subjective topic?

The rapid motions you see are normal, are not excessive in magnitude, and the duration is relatively brief. The constant corrections are a direct result of the precision required to maintain glideslope, coupled with the sensitivity of the carrier’s Fresnel lens Optical Landing System. (OLS, the orange “meatball” centered between two rows of green datum lights) 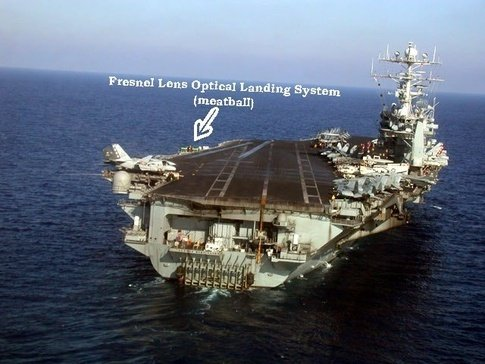 Navy pilots are taught to control the angle of attack with pitch, and glideslope with power. (he is not trying to accelerate when he adds power, he is slowing his rate of descent)

Deviations from glideslope should be fixed immediately with a three part power correction:

The issue that you can never truly find that sweet spot where you can just leave the power set and ride it out. There are just too many variables, and the ball is very sensitive. So, one three part power correction leads to another three part power correction, and so on and so forth. The reality then is what you see; almost constant throttle jockeying in order to control the ball as best you can.

Fine control requires much more rapid corrections. Think of it this way, if I asked you to ride a bicycle along a painted white stripe 24” wide you could probably do so quite smoothly. However, if I asked you to strictly follow a line merely the width of the 4" painted stripe along the side of the road, your handlebar movements would be much more rapid as you made corrections to attempt to avoid straying from this thinner line. Your bike might follow a more precise path, but you would be a bit more jerky in keeping it there.

For comparison, probably one of the more precise optical glideslopes available to civilian pilots is the 4 light PAPI. (“P” for precision…) This pales, however, compared to the sensitivity and precision of the Navy’s OLS.

With PAPI the white light fades slowly into red, and even when the colors are distinct the incentive for immediate correction is not as urgent. If you have three red lights and one white, so what? You are a little bit low… Check your VSI, maybe squeak a little more power on, but if you are assured of making the runway your focus is probably on being smooth. Nobody is watching, nobody really cares that you are a little bit low, and you have more time to correct it.

It is different on a Navy carrier. You have 15 to 18 seconds from the time you roll wings level until you touch down. If you are high or low at the start you need to fix it. You need to fix it NOW. If you carry that trend for more than a couple seconds people will start talking to you on the radio offering not so friendly “suggestions”. There is a team of a half dozen Landing Signal Officers (LSOs) standing at the back of the ship watching and recording your every move. Their first job is to keep you from hitting the ramp, their second job is to get you aboard on the first pass, their third job is to document every deviation (in short hand) for pilot trend analysis and determination of a landing grade that will rank you against your peers.

Video of every approach is broadcast live on closed circuit television all around the ship. Your squadron commander, your peers, the airboss, captain of the ship, and a host of other random personnel on the ship are all watching you in real time. The LSOs will send you around with a “wave off” if they don’t like how you are responding to deviations, and your landing grades and reputation will suffer.

There is pressure, therefore the incentive to make immediate corrections is strong. The ball moves noticeably to indicate the slightest deviation from glideslope, so the pilot is going to move the throttle just as rapidly as needed to keep that ball smack dab in the middle where it belongs, and avoid a wave-off or bolter to get aboard the first time.

Worth noting, but this pilot went to full power well before crossing the ramp, so he must have gotten pretty low in close!

Engine spool-up time is not nearly the issue it was in the early days of jet carrier aviation in the 50s and early 60s. The Navy learned the hard way back then and these days most jets are optimized for acceptable throttle response at approach speeds.

Regarding your final question, the answer is yes. Navy pilots are even more skilled than Red Bull air race pilots. 😉

This one comes out of the Airplane Flying Handbook

The drag curve for many jet airplanes is much flatter than for propeller airplanes, so speed changes do not produce nearly as much drag change. Further, jet thrust remains nearly constant with small speed changes. The result is far less speed stability. When the speed does increase or decrease, there is little tendency for the jet airplane to re-acquire the original speed. The pilot, therefore, must remain alert to the necessity of making speed adjustments, and then make them aggressively in order to remain on speed.

The video appears to be a Case II marginal weather trap with the pilot flying the airplane manually to the deck. This also appears to be an earlier block F/A-18E or F Rhino which has not been fitted with the newer ‘Magic Carpet’ delta flight modes, which integrates throttle control during an approach with other flight controls to reduce workload during traps.

As to your question about landing aboard a carrier, yes it is difficult and requires a lot of concentration on order to fly the jet very precisely, with minimal deviations, to impact the deck such that the tailhook will successfully snag the #2 or #3 cross deck pendant and allow the jet to roll out to a full stop right down the groove. As to comparing it to the difficulty of, say precision flying in aerobatics, that’s kind of apples to oranges; they’re just different spheres of flying prowess.

Well, first things first. He's working the throttle so much because instead of managing altitude with pitch and speed with power, on approach, you manage speed with pitch and altitude with power. He's simply maintaining the glideslope. Next, yes, throttle response is very slow. Some jets take up to 8 seconds to spool from idle to max power. He also may not have been going to full power in the video, perhaps just MIL power instead of A/B. Your 3rd question is much more of an opinion-based question.

It's for safety reasons.

Jet engine need some time to spool-up when applying full throttle. Thus you have a delay between your actions and thrust increase. That may be 1-2 seconds but when landing on an aircraft carrier 2 seconds might mean you end in the water.

When coming to land on an aircraft carrier you're planning to go around, as missing the stopping cable might happen. In that case it's better to get more thrust as soon as possible therefore the preventing action of applying full throttle just before landing. Anyway if you grab one of the stopping cables, it will stop you whether the engine is producing thrust or not. Once the aircraft stopped you can reduce throttle and taxi back to parking.

Most if not all the navy pilots are aerobatic pilots. Those are two completely different worlds. It's all about personal opinion then to judge who's the best.

2
Are there any autoland capable aircraft without autothrottles?

8
Why is there so much movement of the sidestick during this takeoff?
97
Why do fighter jets still have guns/cannons?
13
Why don't fighter jets take off vertically?
10
Why are many military fighter aircraft designed to fly supersonic?
43
Why do many fighter jets have double vertical stabilizers?
7
Why are civilians not allowed to fly demilitarized US fighter jets?
12
What are the pros and cons of having a side-stick versus a centered control stick in a fighter aircraft?
6
Stick in center console, how to easily write down clearances and other similar information?
4
What is the throttle setting of a piston aircraft during cruise?
31
Why don't B747s start takeoffs with full throttle?