Is it possible for a plane to accelerate easily from 30 to 45 mph in flight while it struggles to reach 30 mph (the engine runs at constant power)?

In two letters sent to Dr. G. A. Spratt (an aviation enthusiast), Wilbur Wright reported the progress he and his brother had made, up to September 10, 1904, regarding Flyer II, a plane powered by a 16-17 hp engine. (The pilot had no means to control the motor in flight. He could just stop it, in which case the machine landed.)

The plane needed an airspeed of about 30 mph to fly well. The machine lifted at 23-24 mph (airspeed) but it always fell unless the airspeed reached 25 mph. Between 25 and 30 mph it struggled to keep flying but if somehow reached 30 mph then it accelerated without problem, by itself, to 45 mph.

Between 30 and 45 mph the drag should have followed a significantly different law from $\text{Drag} = kV^2$. What would that law be?

Dear Dr. Spratt, ...
Up to Aug. 1st we had made but fourteen trials; since then we have made seventeen more. So far our longest flight is only 1304 ft. in 39-1/2 seconds, which though farther over the ground than our longest flight at Kitty Hawk is not its equal in duration of time or distance through the air. We are however working under much less favorable conditions so far as grounds and atmospheric conditions are concerned. We have found difficulty in getting satisfactory starts owing to the fact that the winds are usually very light by spells, and the new machine requires a higher relative speed for starting than the old one. It lifts at a speed of 23 or 24 miles an hour but the angle is so great that the resistance exceeds the thrust and the machine soon stalls. Between 25 and 30 miles it is a case of nip and tuck between them; but after the relative speed reaches 30 miles, the thrust exceeds the resistance and the speed accelerates till a velocity of forty five or fifty miles is reached. So far the highest speed attained is forty five miles, but it may exceed this when we get to making longer flights. We are proceeding very cautiously; and do not intend to attempt anything spectacular until we know that it is safe, and we know all of the machines peculiar tricks. ... Yours truly, Wilbur Wright.

Dear Dr. Spratt, ... We have made forty five starts with our 1904 Flyer. Unless the relative speed at starting is 27 miles in a calm and two or three miles more than that in a wind, the machine will gradually slow down till unable to fly. After the relative speed passes thirty miles the velocity accelerates till a relative speed of 45 to fifty miles is reached. We found it difficult in practice to get a speed down the track greater than 20 miles an hour, so that unless we had a wind of about 10 miles we were not sure of being able to fly for a lull in the wind would let us drop below the real flying limit. As we were not ready to turn our backs to such a wind on account of the enormous speed in landing when going with the wind our flights have been confined to the length of our pasture field. We have made a number of flights between 1250 and 1450 ft long. We have now finished a starting apparatus which gives a speed at start of 27 miles an hour in a dead calm, and expect shortly to begin circling. With longer flights and less hauling the machine back, we hope to get more practice than heretofore. With kind regards, Yours truly, Wilbur Wright.

This is just an illustration that shows Flyer I and II. It has nothing to do with the two letters quoted above. 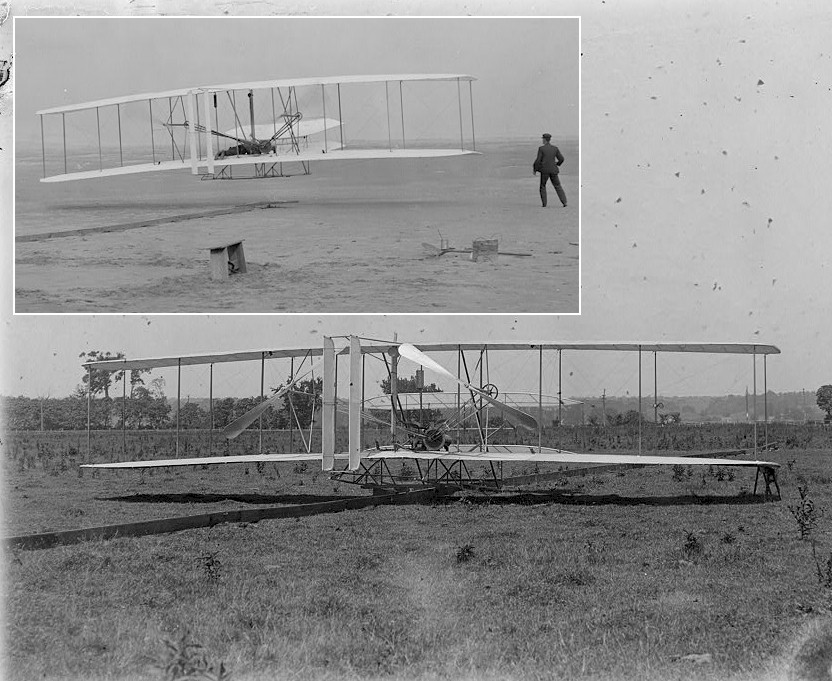 Yes and in this case this is due to induced drag.

This drag can be derived with the lift and drag equations of a wing :

As you can see the second part called induced drag is decreasing with respect of $V^{-2}$. Therefore while flying slow the the faster you go the less drag you will have to overcome as you can see in the following picture. And at one point the other drag forces in the first term, namely pressure drag and friction drag will push back the drag to increase as $V^2$: 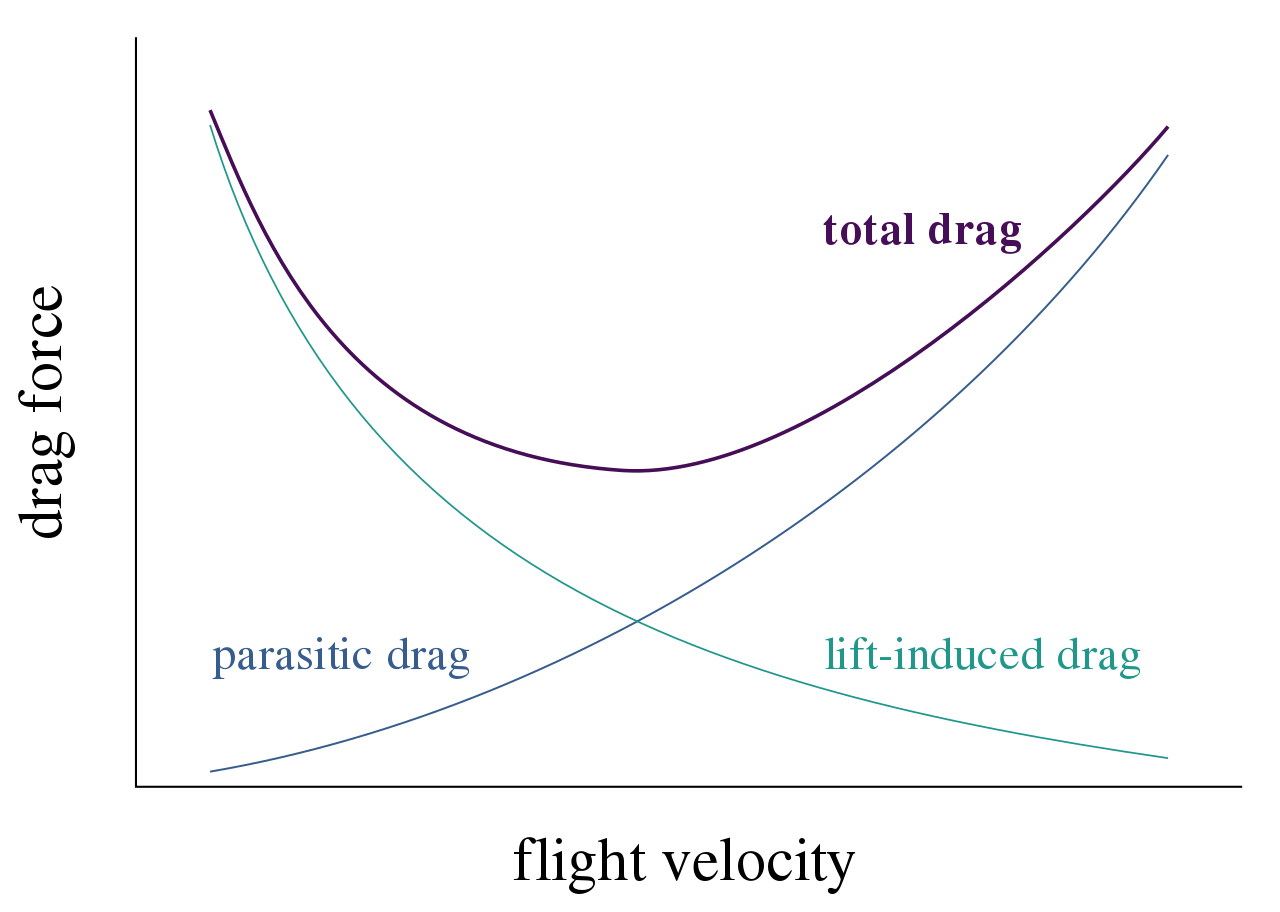 As you can see your assumption that the airplane drag increases with $v^2$ is not entirely valid. This works under the assumption of level flight, meaning that your lift remains constant and the induced drag of the wing is therefore only dependent on the air speed. As the wing efficiency decreases with AOA increasing, flying at slow speed and high AOA will generate more induced drag than flying faster with smaller AOA.

Stall of the propeller at low speed might be another explanation why the acceleration is slower. With fixed pitch, thin propeller blades you might enter stall region with to high AOA which will prevent you to have good acceleration at low speed. In the early days of VP props people used to run off the end of runways through trying to take off in coarse pitch. They propeller was stalled and only a small amount of power was transferred to thrust.

Yes, and it occurs with nearly every airplane there is.

It is caused by lift-induced drag. 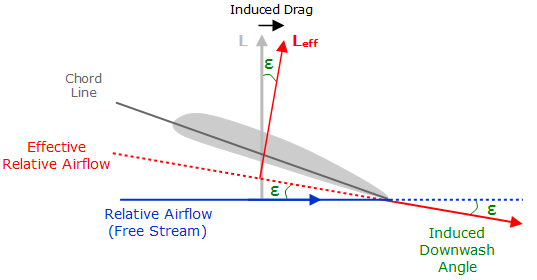 Lift is created by a wing deflecting airflow downward, itself being pushed upward as a result. (Newton's third law)

Lift-induced drag is the backward component of the resulting reaction force acting on a wing. Since at lower speed, the wing needs to be tilted up more to create the necessary lift from the tiny available airfow, the total drag force created by the wing can increase - dramatically.

Induced drag follows the inverse of the drag equation you mentioned - it decreases with the square of velocity.

The drag referred to in your equation is parasitic drag which is created by air interacting with the airplane in useless ways, such as squashing against the nose, creating friction on the skin, etc.

What W. Wright describes in his two letters to G. A. Spratt is pure fiction, imaginary flights.

Using the zero lift drag coefficient taken from the lift and drag diagram of the Wright 1903 machine (a valid approximation as Flyer I and II were quite similar) and also the technical characteristics of Flyer II as it was before September 10, 1904, (without weights of steel added), I reached the conclusion (see the Mathcad worksheet below) that, for the interval of airspeeds ranging between 30 and 45 mph, the drag, when Lift = Weight, increased continuously.

As can be seen in the diagram, the thrust at constant power was always above the total drag till somewhere between 30 and 35 mph but it dropped below after that and in consequence the airplane could not have reached 45 mph.

In theory the plane had enough power to take off and fly without problems only below 35 mph. The story of Wilbur with the rapid acceleration of his apparatus after reaching 30 mph is just just imagination based on wrong beliefs. 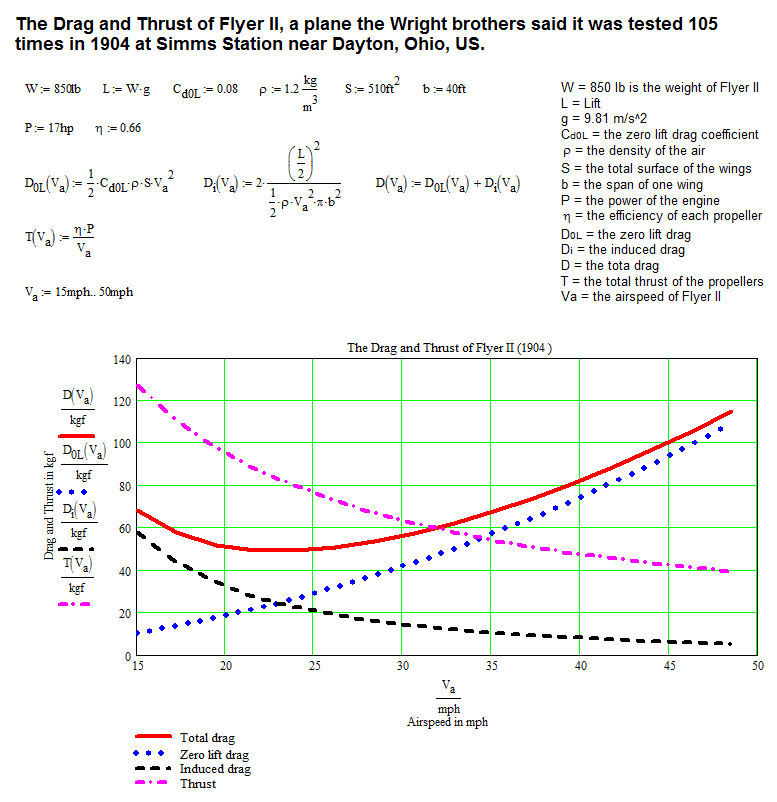 The Drag and Thrust of Flyer II (1904). The induced drag formula was taken from here. I also took into account the fact the plane had two wings, one above the other.

Not the answer you're looking for? Browse other questions tagged aviation-history drag airspeed or ask your own question.

11
What engine of the period 1855-1865 would have lifted one of Wright brothers' aeroplanes off the ground?
1
Is there any clear picture or drawing, of a Wright brothers' plane, published before August 12, 1908?