What is this helicopter type at a U.S. military base?

This helicopter is on a US military base, shown by Google Maps. I don't recognize the glass windows at the front top. 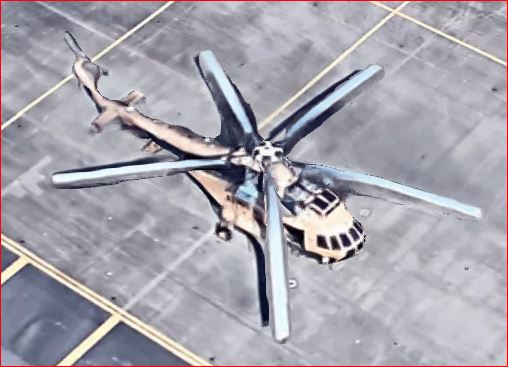 In addition to Peter Kämpf's comprehensive answer identifying the helicopter as part of the Mi-17 family, this aircraft is likely to be a Mi-171E, clandestinely operated by the United States government, specifically it is 15-5207. With respect to 15-5207, the pictured aircraft 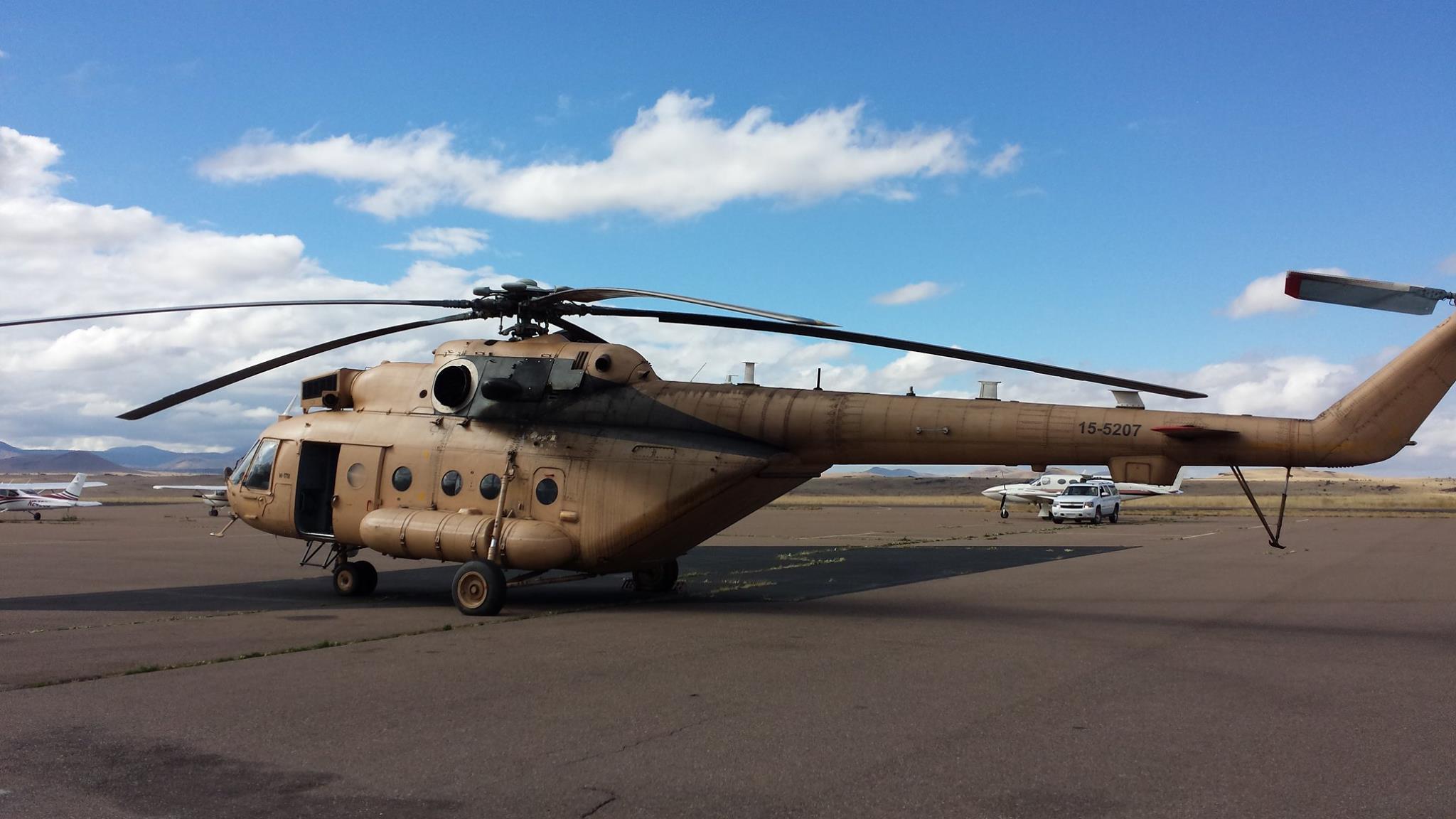 15-5207 was photographed at Felker Army Airfield, Virginia USA in December 2017; the orignal picture from Google maps is also Felker (note the provided link does may not show the helicopter depending on where you are). Felker is part of Joint Base Langley–Eustis. This aircraft has been noted at -

Understandably, the American military and secret service use of Mi-171E is not widely publicised, although it's known that the CIA has used the Mi-17 in a number of theatres. This particular aircraft carries no identifying markings; it may be connected with the US Army's purchase of 30 Mi-17s in 2013.

There are rumors that the US Department of Defense are using Russian build aircraft for Special Forces Operations in areas abroad where no western type aircraft operate. Evidence of this is very hard to find. ...

It is known that the US Air Force has the 6th Special Operations Squadron (SOS),based at Hurlburt Field (FL), which is specialized in Foreign Internal Defense (FID) operations. The primary role of the 6th SOS is to assess, train, advise and assist foreign aviation forces in the use of their aircraft, but the squadron also carries out intra theater support of special operations forces, flying clandestine night-vision insertion and extraction, air land and air drop resupply mission with the capability of operating from unimproved runways. 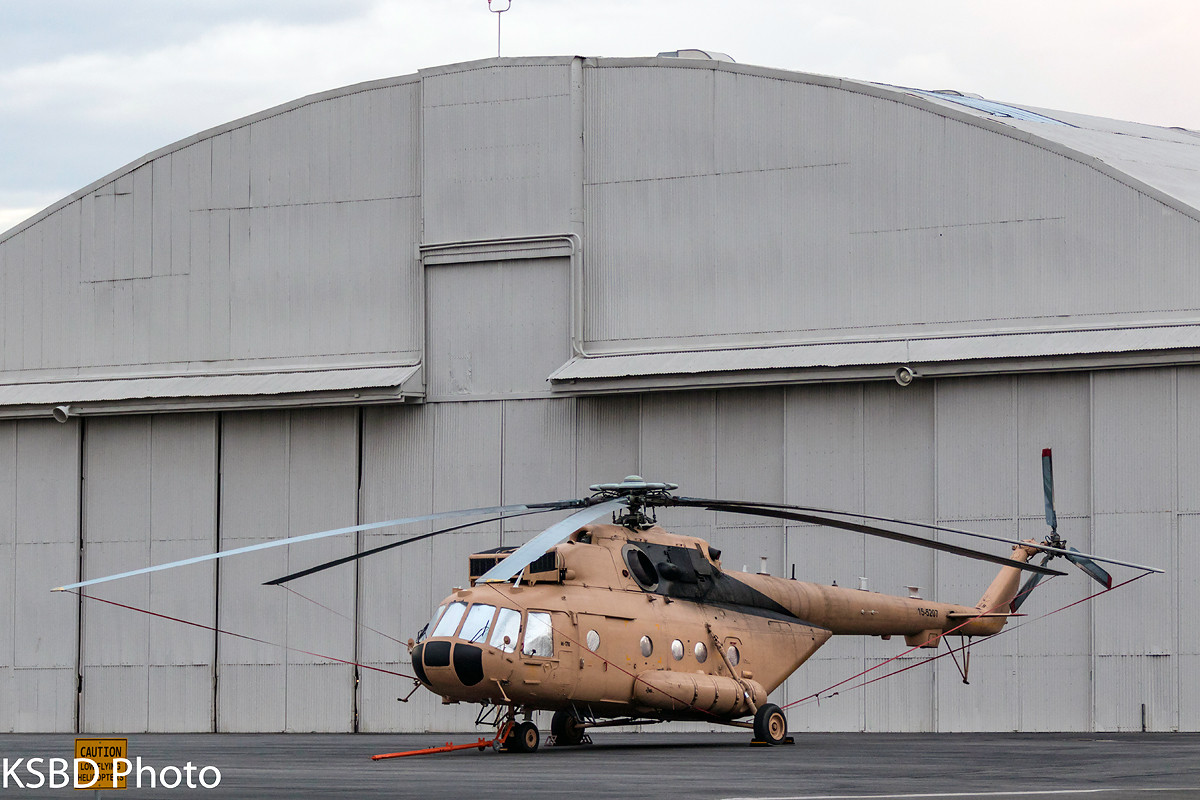 Mi-171E operated by the US Government (source)

Looks awfully like a Mil-17, more specifically a Mil-171. This is a development of the Mil-8 and known as Mil-8M in Russia but called Mil-17 when exported.

Below is a different view of the same spot from Google. Count the number of front windows: 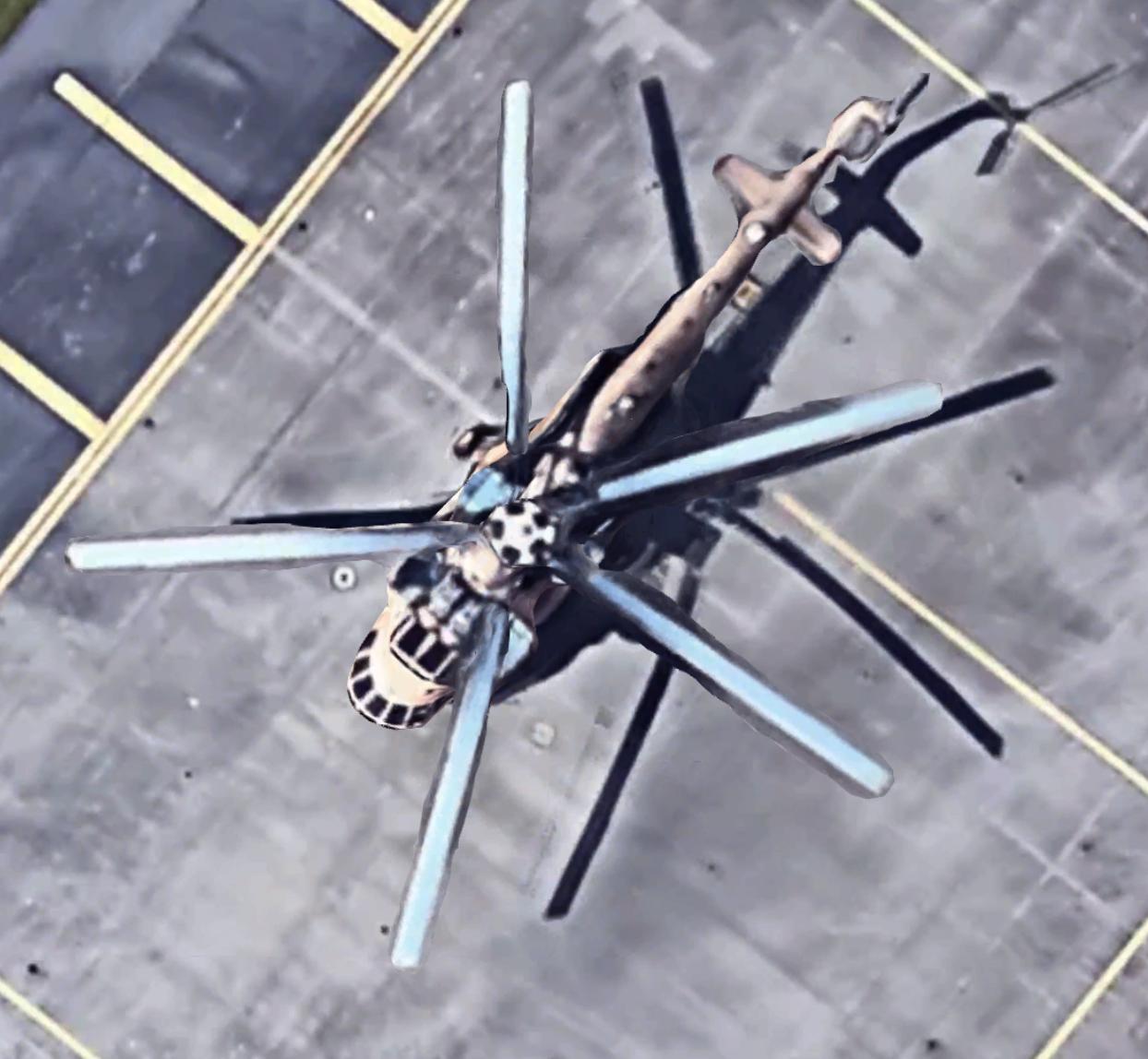 and compare it with this one: 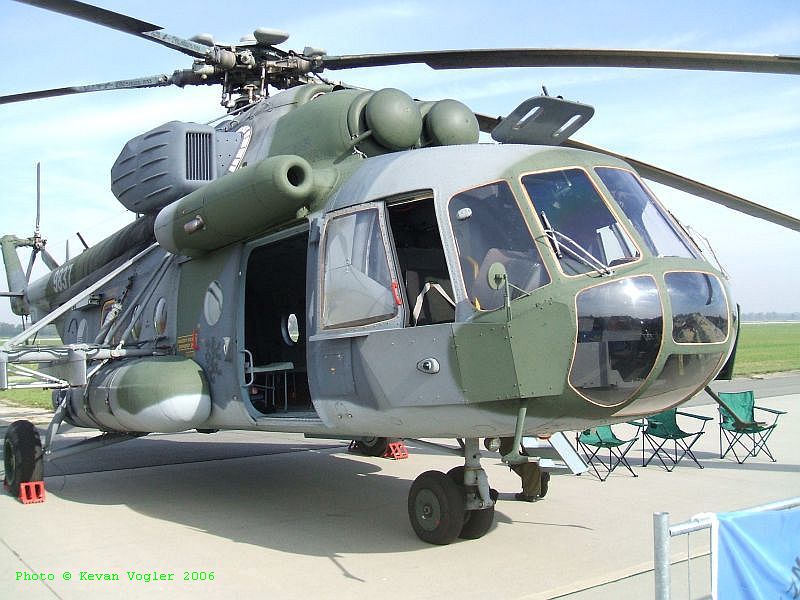 This is a Mil-171 with the same large freight door on the right (picture source). It looks very similar to a Mil-8 from which it is derived but can be distinguished by the opposite placement of the tail rotor (which is on the right side in case of the Mil-8).

Since this is (together with the Mil-8) the most common helicopter worldwide, it comes in lots of variants. This one here could actually be a Mil-171Sh, as Wikipedia says:

Actual model numbers vary by builder, engine type, and other options. As an example, the sixteen new Ulan-Ude-built machines delivered to the Czech Air Force in 2005 with -VM model engines were designated as Mi-171Sh, a development of the Mi-8AMTSh. Modifications include a new large door on the right side, improved Czech-built APU, and Kevlar armor plates around the cockpit area and engines.

The large door on the right side is very prominent in your picture. Also, the engine exhausts of the Mil-17 are covered by large boxes in case of the Mil-171 which dilute the exhaust gasses and make them less prominent for heat-seeking missiles. It is hard to see in the Google picture, but it seems that helicopter also has those boxes installed. Another change is the rear ramp of the Mil-171 which replaced the clamshell doors on the Mil-8 and -17. It seems the helicopter in the Google picture also has this rear ramp, visible by the tapered shape of the rear fuselage.

The US was reportedly considering adding the helicopter to the US military for special forces use in order to obscure troop movements. The US has used some Mi-8s and Mi-17s for training, and has purchased units for allies in Iraq, Afghanistan and Pakistan.

Not the answer you're looking for? Browse other questions tagged military helicopter aircraft-identification or ask your own question.

2
Can you help me to identify this helicopter?
17
What are these aircraft at AMARG? Why are they dismantled this way?
4
What is this aircraft?
12
What are these aircraft at the Naval Air Weapons Station China Lake?
25
What happened to this airplane at Lombok Airport?
3
Why would a foreign military aircraft be parked at a US Air Force base?
1
What is this helicopter seen in the Falcon Crest TV series?