Why does exhaust flow inwards through a radial turbocharger?

In a radial compressor, the air enters centrally and passes outwards, aided by centrifugal force. But, as the diagram shows, in piston-engine superchargers the driving exhaust gas flows inwards through a radial turbine. This has to fight against centrifugal force instead of leveraging it. So why is it done? 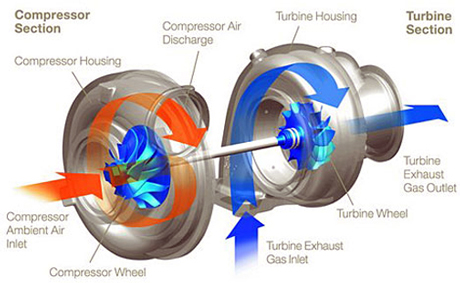 This has to fight against centrifugal force instead of leveraging it.

In fact, the opposite is true. The arrangement shown actually helps to extract energy, perhaps counterintuitively. A typical example of this arrangement is the Francis turbine.

There are a few ways of looking at this. One is to look at the exit velocity of the fluid. In a compressor, it's okay if the fluid has some leftover velocity as it will by converted to static pressure when slowed down by Bernoulli's law. For a turbine, the exit velocity should be as low as possible, as kinetic energy of the exhaust flow is 'wasted' energy. So it makes sense to place the exit at the inner radius of the turbine, where the radial velocity component is lowest.

Another way of looking at it is pressure. Centrifugal force creates a pressure gradient across the turbine in radial direction. As a 'packet' of air moves inwards, its pressure becomes lower. By conservation of energy, this must mean that it is expending work on its surroundings. The turbine extracts this work done from the packet of air moving inside.

Another intuitive explanation involves an ice skater retracting their arms in a pirouette (or a bored office worker on a swivelling chair). By conservation of angular momentum, their angular velocity increases. A packet of air would 'like' to increase its angular velocity, but this is kept fixed by the turbine rotating at a fixed velocity. The packet of air must thus be slowed down moving inwards, and as a result exerts a pressure on the turbine blade in front of it.

It does seem counterintuitive to arrange the flow as it has been done in turbochargers, but this arrangement is the best compromise for harnessing kinetic energy from exhaust gasses of a reciprocating engine.

The turbine housing is formed in such a way, that it dimishimes in size as it circles the turbine wheel. Thus the exhaus gasses travelling throug the chamber eventually (rather quickly in fact) run out of space, and are pushed into the exhaust outlet by the following exhaust pulses.

As such, the exhaust gasses do not need to overcome or fight centrifugal forces, as the housing provides a path that guides the gasses along.

This arrangement, as opposed to reversing the flow, allows for a simplier and less critical turbine wheel profile, and much higher efficiency across flow rate range (iirc I try to dig up the reference) Compared to an axial turbine this construction is less efficient, but it also is so much more simple and compact, that it by far outweights the smaller efficiency.

Not the answer you're looking for? Browse other questions tagged piston-engine turbocharged or ask your own question.

14
Why/How does a “Powerflow” exhaust increase horsepower?
22
Why are Inline Engines more commonly used than Radial Engines?
22
Why does manifold pressure increase with power?
4
Why are the exhaust pipes design on the Ilyushin Il-2 not very popular?
4
Why does MAP show ambient pressure when engine is shut off?
51
Why do most radial engines use an odd number of cylinders?
5
Why don't air-cooled radial engines use fuel to cool the oil?
1
Why weren’t large, high-power radial engines built to take advantage of the Meredith effect?
3
Why, during a magneto check, does manifold pressure increase as RPM decreases?