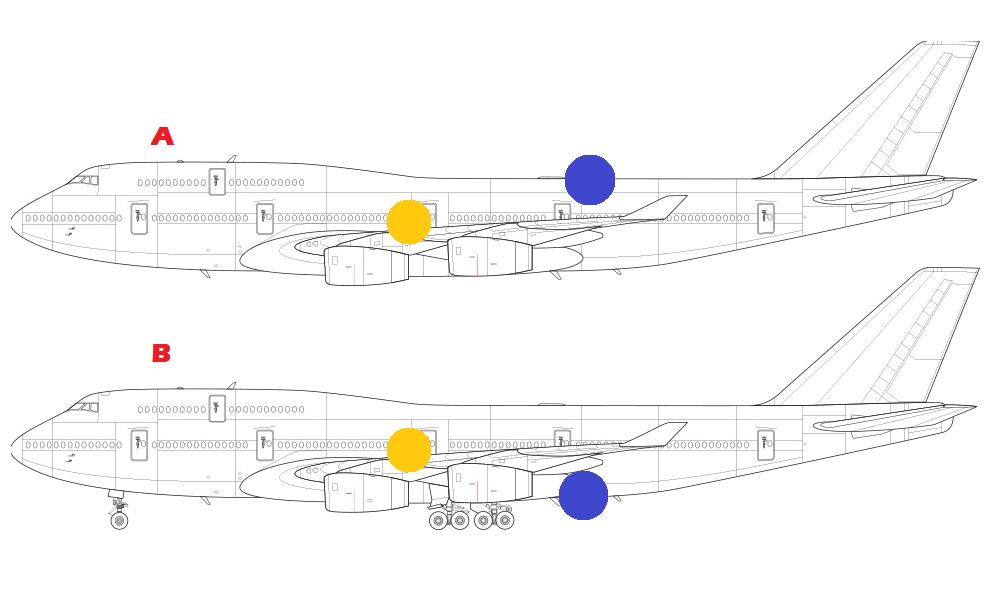 In my opinion the vertical position of the center of gravity (CG) is negligible. First of all the variation will be very small. Between an airplane with lead on the bottom of the cargo and an airplane with all passengers on the upper deck the CG will not move that much. And statistically the CG will probably be somewhat around the centerline of the fuselage. Then, yes drag forces and engine thrust could create a tiny pitching moment but the leverage will only be a few inches at max thus the moment being very small compared to the gravity VS lift pitching moment resulting from the horizontal distance between CG and CP.

In the end question is somewhat similar to : "what's better low or high wing planes?". On one side CG is above or near the wings and on the other hand way below the wing. Both works fine and requires only small design variations for aerodynamics stability.

Since in most aircraft, the Aerodynamic center is behind the CG, and in normal straight and level flight, the vector must of course be pointed upwards and slightly aft (due to the drag component), the vertical position of the Center of Pressure will have only a minor impact on the static margin. The term "Static Margin" is often used to describe this phenomenon. It is a measure of the distance between the extension of the Aerodynamic force vector and the position of the center of Mass. The lower the static margin, (the closer the vector is to the CG), the less stable the aircraft is and the more the trim forces are required to keep it in balance.

Not the answer you're looking for? Browse other questions tagged wing lift weight or ask your own question.

4
Does wing sweep affect the direction of lift?
3
Why changes the lift during turning with sidewinds? Why is there relative wind in the wind-frame?
3
Does Buoyant Lift Force scale with Load Factor?
1
Anyone able to help identify what aerofoil this is?
8
How does speed affect lift?
3
What is the definition of Lift?
3
When calculating the lift coefficient, what area is used?
5
Does the tailplane have a positive/negative camber?
3
Why is the aerodynamic center for most airfoils located at the quarter chord location?
0
What are the best methods for calculating lift during different stages of flight?