Isn't it dangerous for a soldier to sit on the outside of a flying helicopter? 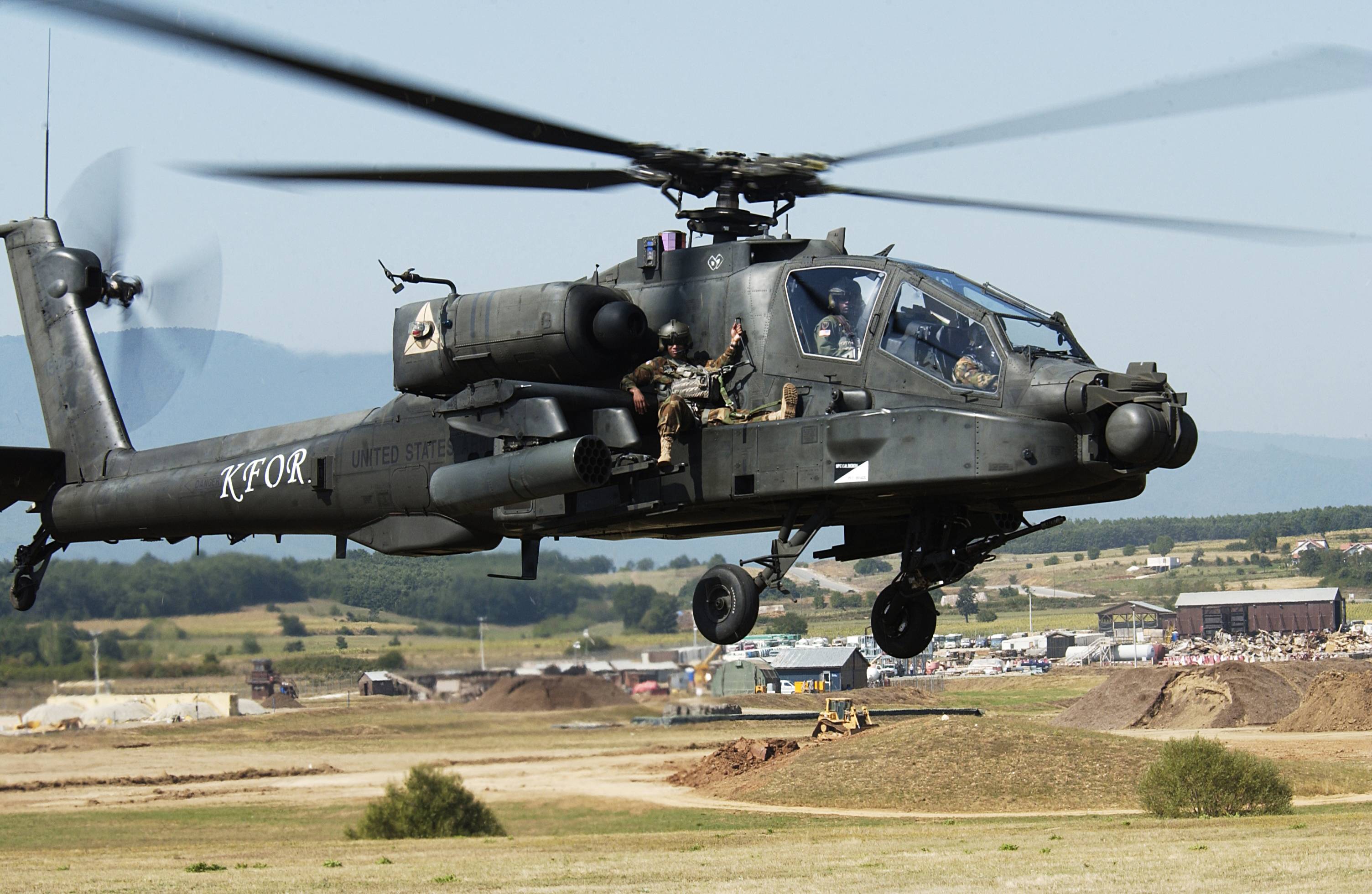 AH-64 during an extraction exercise at Camp Bondsteel, Kosovo in 2007 with a soldier on the avionics bay.

To answer your question of is this dangerous, yes it is. It is very dangerous to be in a job where you voluntarily go into an environment in which you risk your life to combat other individuals who are actively trying to kill you. It would be much safer to never join the uniformed armed services.

On the other hand, in every activity, a certain amount of risk must be accepted while as much risk is eliminated or at least mitigated as possible. After reviewing the original picture from the Wikipedia link in your question, risk mitigation has been performed. The soldier on the outside of the aircraft has been tethered to the aircraft by safety lines attached to at least two points on the aircraft. These are the green high-strength webbing straps attached to two different handholds on the fuselage. These are clearly seen in the higher resolution original picture. You can also clearly see what looks like some type of safety tether deployment bag on his chest while the leg straps of his safety harness are also clearly visible.

Although safety measures have been taken, It is not very likely that the soldier on the outside of the aircraft could not hang on through sheer body strength. During regular maneuvers, his body weight alone should keep him in place.

Case in point, while serving as a paratrooper, I have jumped from UH1s, UH60s, and CH47s. It was quite common to sit on the floor of the aircraft with our feet dangling out of the open door. At other times, we would stand on the skids. Sometimes, the aircraft would be performing combat maneuvers. Only our left hands would be free to hold onto anything available while our right hands were protecting our reserve chute handles. Most likely our left hands were also occupied hanging on to rucksacks or weapons cases. Only a single webbing strap loosely stretched across the door served as our safety line. The load forces induced by gravity and the maneuvers kept us firmly seated during some very extreme banking.

Also, having done civilian skydiving from various Cessnas and Twin Otters, I can attest to the fact that the wind blast/slipstream, on the outside of the fuselage, while not quite pleasant, is not unbearable. It is not very difficult to hang on to the outside of an aircraft at cruise speed.

Although, never having to test a safety harness like this one, I do know that a tether similar to this one should be able to securely tow a fully kitted paratrooper, with a full combat load behind a fixed wing aircraft traveling in excess of 200 knots indicated airspeed. Just as long as his chute does not open. And military transport crew chiefs wear them all the time when moving around on the open tail ramp of an aircraft in flight. Some personnel also had similar harnesses to insert and extract personnel hanging from rigging lines or Fast ropes (SPIES/FRIES). You would literally be hanging under a helicopter in flight with less than the soldier in your picture keeping you alive.

As far as getting sucked into the intake of the turboshaft engine, I don’t think it would happen. It appears that the intake is shrouded enough to decrease or eliminate FOD (human or otherwise). It certainly is not as big and open as a high-bypass turbofan. But, I would have to defer to others with that particular knowledge and expertise.

Edit:
To respond to your edit of your question, there is very little danger that a harness inspected and approved for use would just tear. The webbing used to make the harness has a long and safe history. As I have pointed out above, it has been documented and proven to be able to handle loads many times greater than the weight of a human being in many safety and aviation related fields such as skydiving.

The webbing may be cut. But it would take a deliberate act or a very sharp projection to cut it. A projection like that on the aircraft would be noticed as being dangerous and far more likely to cut the soldier.

A more likely scenario is one where the bindings and buckles on the harness are not properly done when the soldier puts the harness on. The two leg straps and the chest harness gives you three separate failsafes. I would hazard a guess that a safety inspection of the harness, it’s donning and wear are accomplished by a specifically trained senior enlisted soldier like a crew chief, load master, jumpmaster, or rappel master before an operation such as this.

Carrying people like this was part of the Apache design, mainly so that one helicopter could extract the crew from another that had been shot down.

It's use during combat in Afghanistan is documented in Ed Macy's book 'Apache' when two Apaches carried four marines into a fort to rescue another.

Dodging Taliban gunfire - and with four marines lying across the wings in the manner of the heroes of the second world war film Flight of the Phoenix - the two Apaches sped across the river and landed outside the Taliban fort. The marines unstrapped themselves and searched for Lance Corporal Ford. Having recovered his body, they strapped it to one of the Apaches and safely crossed the river.

Defence sources described the rescue as an unprecedented operation. Apaches cannot carry passengers - the small fuselage is crammed with instruments and weapons systems and can barely accommodate two pilots. But there are attachments on the wings to which soldiers can harness themselves in an emergency.

It's notable that at least one of the marines flew out without the harness.

what if the harness tears?

That thickness of webbing strap can hold several tons, and no doubt the harness design has been thoroughly evaluated before it entered service.

A simple inspection would spot damage sever enough to leave the harness in any danger of tearing.

What if the soldier falls?

Presumably the harness is designed to prevent that.

Or if he gets sucked into the helicopter engine intake?

The large black object on the front of the engine is designed to stop it sucking in debris. The openings look far too small to suck in a human.

As a more general answer: the risks associated with an operation such as this have been carefully assessed, and found to be minimal if performed according to proper procedures. Based on what, one might ask?

It may sound contradictory, but it is actually hard to find more safety oriented organizations than the military. To keep the personnel safe is of utmost importance, because a military organization that loses their troops out of their own recklessness will not be able to function efficiently in crisis situations.

The most serious risk military personnel are subjected to is the encounter with the enemy (I might even venture to say the only one, but that might be stretching it...). As such many of their operations seem dangerous, even very much so, but all risks have been carefully evaluated and mitigated to the lowest possible level.

Much of the stuff done by military makes impressive press, but behind the daredevil looks is countless hours of preparation an training. Most accidents there actually involve complacency, rather than faulty processes, training or lack of attention to detail.

Is this 'dangerous'? That's a 500lb bomb. And next to it, an AIM -120 on the wingtip. In a different timeline, I would have been the guy in the middle. 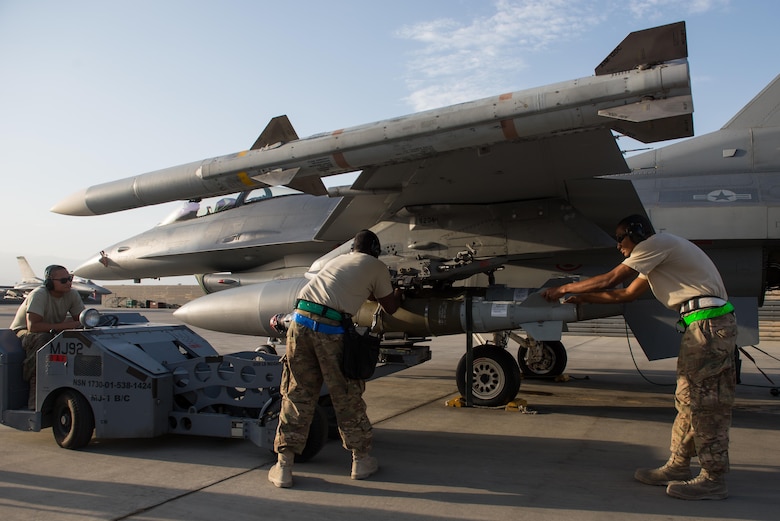 Now, visualize this while the jet was being refueled, and with the engine running and the pilot in the seat. Known as an ICT (Integrated Combat Turn).

Many things in the military are 'dangerous'. In the case of the above Apache pic, that was probably 'less dangerous' than remaining in that area. Would I strap myself to the side and ride there, to evac a worse situation? Absolutely.

Not the answer you're looking for? Browse other questions tagged safety military helicopter or ask your own question.

36
Flying in a helicopter with open doors: why don't people fall out?

62
How dangerous is flying in a single-engine plane?
36
Flying in a helicopter with open doors: why don't people fall out?
9
What is the effect of flying height on helicopter fuel consumption?
34
Is a helicopter ride unsafe for young children?
7
How does flying a helicopter compare with flying a fixed wing plane?