Why is ram air not used for air conditioning in airplanes?

If the ram air is used for air conditioning, the airplane doesn't need a heat exchanger, cooling fan and cool the bleed air from compressor. So why do modern planes use bleed air cooled by ram air?

My guess would be mass of the air. The compressed air has more mass in small volume.

The problem is pressure. In order to use outside air for the cabin, it needs to be pressurized. Otherwise you could not reach higher pressures inside the cabin than outside.

The advantage of using bleed air is that this air is already pressurized, so you don't need to do any additional work. It is however too hot to be used as cabin air directly, so a PACK (Pneumatic Air Cycle Kit) is used to reach lower temperatures using ram air for cooling.

Ram air cannot be directly used without increasing its pressure. On the Boeing 787, which is equipped with bleed-less engines, the outside air therefore needs to be pressurized with electrically driven compressors:

In the no-bleed architecture, electrically driven compressors provide the cabin pressurization function, with fresh air brought onboard via dedicated cabin air inlets. This approach is significantly more efficient than the traditional bleed system because it avoids excessive energy extraction from engines with the associated energy waste by pre-coolers and modulating valves. There is no need to regulate down the supplied compressed air. Instead, the compressed air is produced by adjustable speed motor compressors at the required pressure without significant energy waste. That results in significant improvements in engine fuel consumption.

Note however that this compression also adds heat to the air, so the air still needs to go through a PACK before it can be used as cabin air:

In the 787 electrical architecture, the output of the cabin pressurization compressors flows through low-pressure air-conditioning packs for improved efficiency. The adjustable speed feature of electrical motors will allow further optimization of airplane energy usage by not requiring excessive energy from the supplied compressed air and later regulating it down through modulating valves resulting in energy loss.

Avoiding the energy waste associated with down regulation results in improvements in engine fuel consumption, and the environmental-control system air inflow can be adjusted in accordance with the number of airplane occupants to achieve the lowest energy waste while meeting the air-flow requirements.

You can see the inlet for the compressors and the ram air inlet in the following picture: 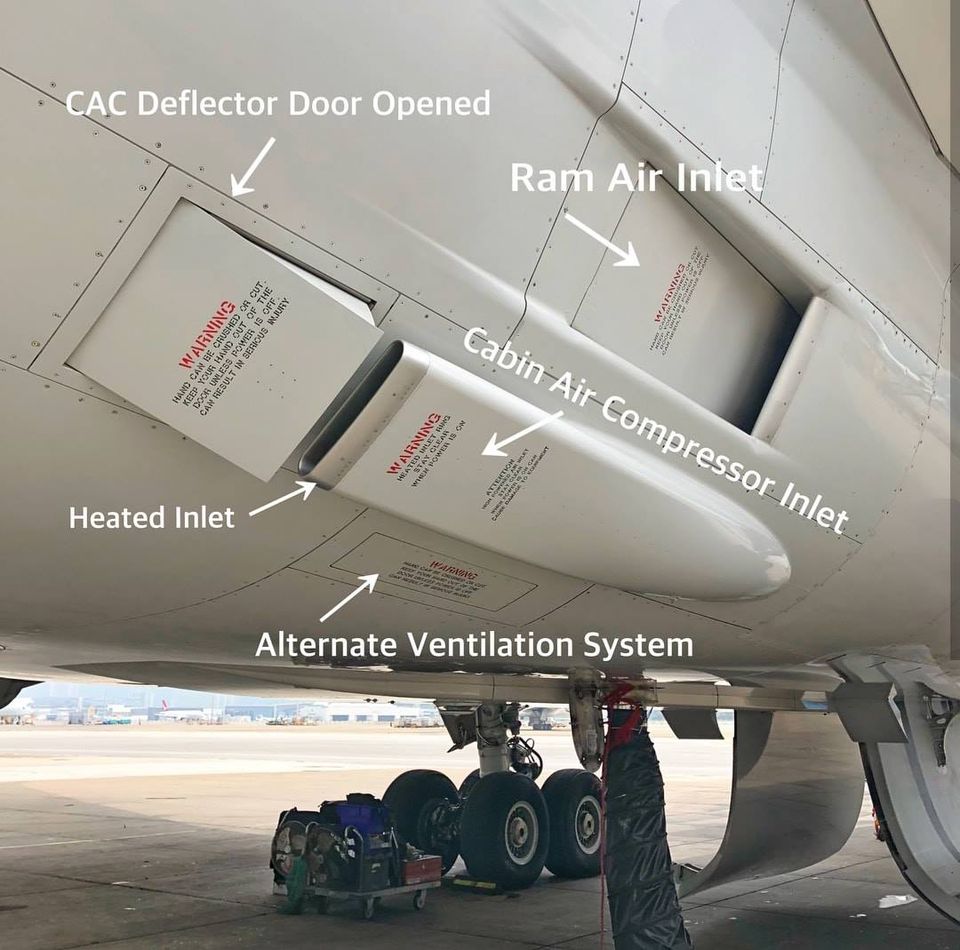 Not the answer you're looking for? Browse other questions tagged bleed-air air-conditioning acs-pressurization or ask your own question.

15
Why is bleed air taken from some stage of the compressor used for de-icing? Why not e.g. exhaust gas?
10
What kind of filters are being used to filter the bleed air?
37
Do jet fighters have air conditioning systems?
4
What are the adverse effects of keeping the PACKs on the A320 running with the LP air conditioning unit connected?
5
What dictates the A320's 'emergency ram air inlet' operation?
7
Why do airplanes have complex air conditioning systems?
1
Air quality monitoring devices for a320
2
Why and how can a fume event occur?