How to know the material of key-top?

There are keys (push buttons) on the front panel of an avionics device that fits inside the aircraft cockpit. I need to know the material of which those key-tops are made from. 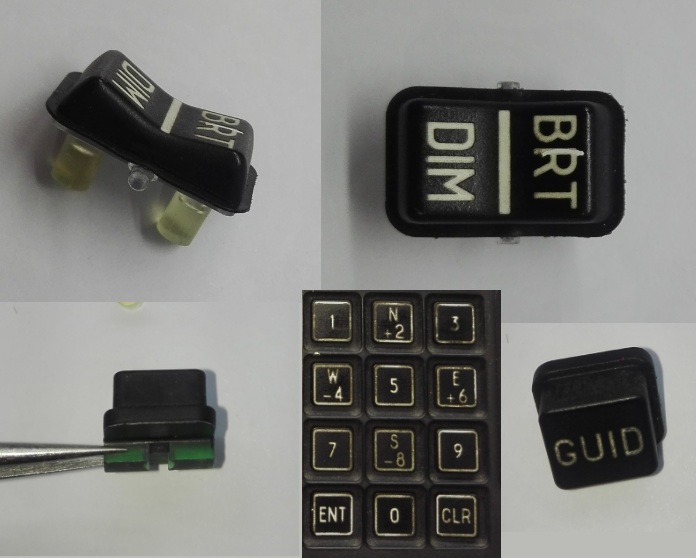 This cockpit device is from a very old aircraft model of 1950's so we can say it is not using any modern high performance thermoplastic or composite material. How can I best identify the material of these key-tops?

Edit: How do I know if the key-top material is compatible with NVIS (Night Vision Imaging Systems)?

The part looks injection-molded. The choice of transparent, moldable polymers available in the 1950s is manageable. The most likely candidates are:

PVC can be detected when a heated copper wire is pressed into it and then again held into a gas flame. The copper will react with the chlorine of the PVC and color the flame greenish (Beilstein test). The last two candidates can be easily identified by the smell they produce when molten. Styrene in the case of polystyrene and derivates of benzene in case of PMMA. Since PMMA is rather soft, it can easily be notched but also has low mechanical strength. When dropped on a table, PMMA parts will create a more muffled, lower frequency sound than parts made of polystyrene.

Both are similarly well suited for being painted. Some plastics like polypropylene and polyethylene are unsuitable for painting because of their low surface energy. But while already known in the early Fifties, those materials were not yet used for parts production. The best substrate for painting would be ABS, but similarly while being known back then, transparent ABS types suitable for molding were not yet used.

My guess would be polystyrene, but given the few hints I am not really sure.

Give the part to a machinist who works with plastics. He will touch the part to a grinding wheel, melting the plastic and making smoke. By smelling the smoke and looking at how the plastic melts, he will be able to tell you which plastic compound the part is made of.

Not the answer you're looking for? Browse other questions tagged aircraft-design cockpit aerospace-materials composite-materials or ask your own question.