What is engine power vs propeller thrust relation?

I know that each blade is basically one wing. Calculating lift is extremely complex; even Navier-Stokes equations will not give an accurate result.

But can I estimate the thrust this produces, for these values or in general?

Things change if the prop is moving forward, as in a flying plane. With the forward speed component, the blades have their angle of attack reduced in proportion to that forward speed. The blades work as wings, and a wing profile has a coefficient of lift that changes with the AoA. Drag does also change with a growing AoA, Hence, for every section of a fixed-pitch prop's blade, there's an optimum L/D at a given combination of rotating and forward speeds that gives the best efficiency. For a fixed angular speed of the prop, there is a given forward airspeed at which the prop works with maximum efficiency, that efficiency –and hence the thrust– dropping asymptotically as the forward speed grows...

Concerning the power delivered by a propeller in forward motion, it's the product of the thrust and speed...

Explaining maritime propeller design in comments doesn't work well, so I give it a shot here.

How is efficiency calculated?

Yes, prop flow is complex and this doesn't get any less complex when the prop is mounted at the stern of a boat. Flow is not uniform there and if the propeller is too close to the surface, it will operate in two media. Since one is a liquid, it itself can turn into a gas if pressure is sufficiently low (cavitation).

In order to straighten the flow and reduce the impact of the boat on the prop, all kinds of things have been tried (Schneekluth duct, pre- and post swirl fins, different values for rake and skew and even winglets in the shape of Kappel propellers). While aircraft propeller blades can reasonably be approximated by wings, ship propeller blades have tight restrictions on diameter which makes them more similar to twisted disks than to wings. Consequently, much of the flow is influenced by the tip effects and the propeller has a much higher solidity (called the developed area ratio in maritime propellers) so mutual interference between the single blades is also more pronounced. This all has an influence on efficiency.

That should be enough to explain why there is no simple formula. Naval engineers are used to diagrams and coefficients, and in this case use a Kramer diagram (see below, picture source) to calculate the ideal efficiency of a propeller. Ideal means that this diagram does not include viscous losses and assumes uniform flow. 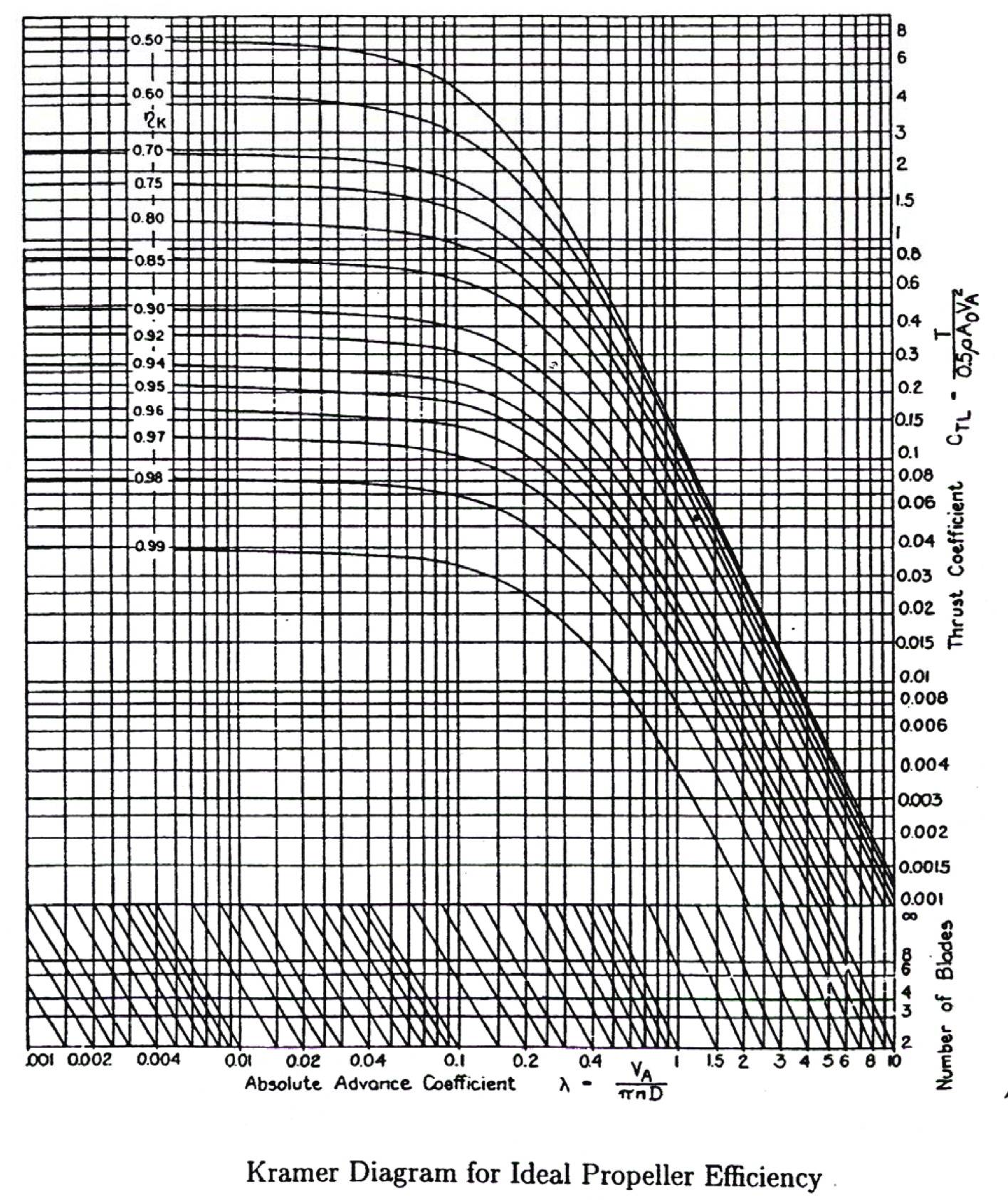 To use this diagram, you need to know the propeller area A$_O$, the inflow velocity v$_A$ (which is normally lower than the ship's speed due to the vicinity of the hull), the thrust T, the rotation rate n in rev/sec and the propeller diameter D. With a known advance coefficient you start at the bottom and move up on the diagonal lines until you hit the horizontal line for the right number of blades. From that point you go straight up until you hit the known ideal efficiency (and read the corresponding thrust coefficient on the right side) or until you hit the known thrust coefficient and read the ideal efficiency from the curves.

In your case both efficiency and thrust coefficient are unknown and we don't even know the boat's speed. So to proceed means a lot of guessing until you go out and measure the speed your propeller-engine combination is capable of, and then return to the Kramer diagram.

27
Is there any equation to bind velocity, thrust and power?
20
Why are there so many different propeller shapes?
20
Why don't aeroplanes use propellers with more blades like the intake on a fanjet?

7
How do the blades on a propeller generate thrust?
8
How does blade solidity ratio relate to thrust/power/torque of a propeller?
1
Why is the available power in propeller engine is almost constant for every velocity?
5
Is this equation for propeller thrust correct?
3
How to realistically model propeller static thrust?
1
Propeller Characteristics at Different Altitudes
2
What is the relation between manifold pressure, RPM, and power, in a constant speed prop?
4
Can the lift equation be used for the Ingenuity Mars Helicopter?