Is turbulence behind an airliner less severe during cruise?

The turbulence and tip vortices behind an airliner are a familiar hazard for smaller aircraft when near an airport. But a lightweight glider seems to have not suffered from this, when its tail was actually struck by an Airbus A 320 at altitude. Page 8 of the accident report mentions only the choc brutal felt by the glider's occupants, and nothing about being blown around like a leaf.

At the time of collision, the airliner was descending through 8600 feet at a true airspeed of 280 knots, if my French can be trusted. The glider was flying at 53 knots, almost perpendicular to the airliner's path. So the glider would have encountered the airliner's wake for a good fraction of a second. Its long wings would be quite sensitive to turbulence.

Compared to the Airbus's high thrust at takeoff, or slow speed and high drag at landing, would its turbulence be less hazardous here, at low thrust and high speed?

https://www.skybrary.aero/index.php/Wake_Vortex_Turbulence#Accidents_and_Incidents mentions some "en-route" turbulence, but only from one aircraft trailing another. So maybe a cross-track incident is much milder.

To answer the question directly: Yes, in cruise turbulence is less severe, but it is lowest when flying low and fast.

We can actually calculate the downward component $v_z$ of the wake (which is a good proxy for turbulence intensity) in cruise and during approach when we know how much lift is being created: $$m\cdot g = \bar{m}\cdot v_z = \epsilon\cdot\frac{b^2}{4}\cdot\pi\cdot v_{\infty}\cdot\rho\cdot v_z$$ $$v_z = \frac{m\cdot g}{\epsilon\cdot\frac{b^2}{4}\cdot\pi\cdot v_{\infty}\cdot\rho}$$ The strength of the downwash is inversely proportional to the product of flight speed and density. This is not the dynamic pressure, which is proportional to flight speed squared times density, so at the same dynamic pressure the downwash gets stronger the higher you fly. This means a descending A320 at only 8000 ft should have a comparably weak wake.

The glider in question was "in touch" with the tip vortex of the A320 only with it's tail, and very briefly:

Picture from section 1.16.2 on page 24 of the Accident investigation report.

The glider was flying at 53kts at almost a perpendicular angle to the path of the A320, and the tail of it struck the outer third of the leading edge of the Airbus. The G103 is about 8 meters long, a wing of an A320 is about 15 meters long, so the wings and most of the gliders fuselage were never superimposed by the wing of the A320: 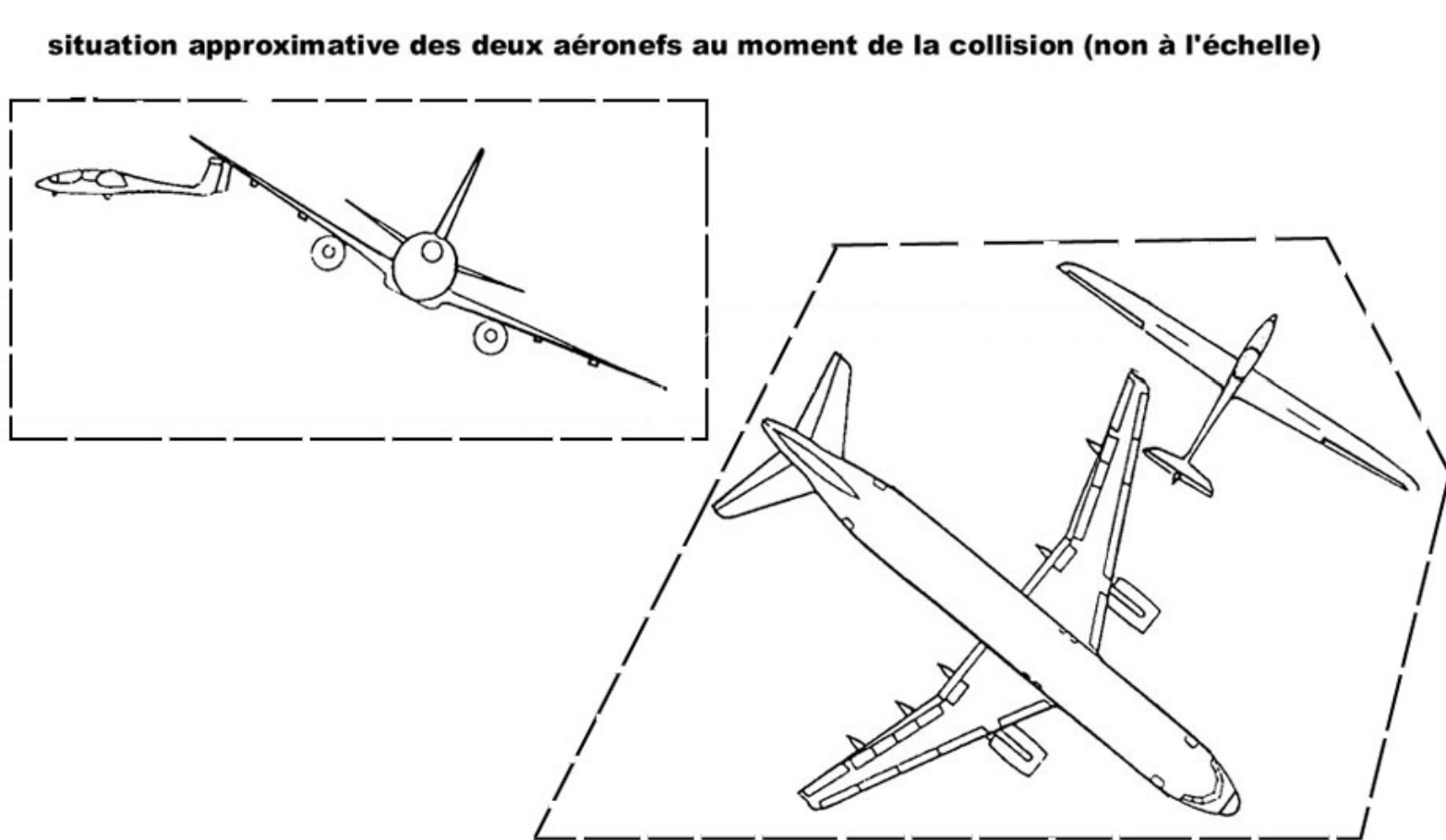 Picture from section 2.4 on page 39 of the report.

As the glider was traveling across the path of the A320 at almost 27 meters per second, even its tail was out of the tip vortex in a blink of an eye, and in any case, only its tail ever was in the effect of the tip vortex. As the tip vortex forms at the tip of the wing, it's diameter is initially very small, growing larger as the distance to the plane grows.

Although the small tip vortex has high energy (high velocity), as the tail of the glider was very briefly traveling through the tip vortex, it was actually traveling in pretty much the same direction as the flow of the tip vortex was. So no great forces were exerted on the tail (except for the collision with the wing, of course...).

As such this incident can not be used as an example of the turbulence or tip vortex strength during cruise (or descent, to be precise), but the the said phenomena are less prominent at higher speed and lower angles of attack (normal cruise / cruise descent). They are at their strongest during slow flight when a high angle of attack is required to maintain a desired flight path (this would also apply for situations of high turn rate).

Not the answer you're looking for? Browse other questions tagged wake-turbulence or ask your own question.

26
Has any airliner ever collided with a glider?

1
How should wake turbulence from aircraft on the ground be avoided during landing?
1
Could reduced-lift wingtips allow an airplane to generate less wake turbulence?
9
With a separation of 1000 feet, in flight is there any danger of severe wake turbulence?