Why does a mid-wing aircraft have lower drag?

Why does an airplane having a mid-wing have lower drag than high- or low-wing configuration even if they have wing of same shape and size?

This article (PDF) claims it's true.

It's because interference drag (the vertical flow field forced to share space with the horizontal flow field) is minimized when the wing meets the fuselage at a 90 degree angle or more.

With a low wing airplane with dihedral, even if the sides of the fuselage are vertical, there is still less than a 90 degree angle due to the dihedral angle. To mitigate the effect of an acute angle at the junction, traditionally a fillet fairing is installed to provide a curving transition between vertical and horizontal, reducing the intensity of the interference closest to the fuselage and minimizing flow separation.

Ideally however, it's better to have as close to a 90 degree intersection, as possible, or better yet greater than 90 degrees, and a mid wing makes this easy to do. And if the fuselage cross section is circular, like the Grumman Wildcat, even better because the intersection is effectively a bit more than 90 degrees because the sides are curving away from the joint. The mid wing has a number of packaging problems however (like the Wildcat's crazy landing gear, spar going right through the key cargo space on transport aircraft, etc).

The Corsair fighter killed two birds with one stone in going with the gull wing configuration; it lowered the wing at the landing gear attachment to allow a much shorter strut, and it maintained a 90 joint at the fuselage even though it was attached near the bottom. The Corsair's gull wing achieved the benefit of a mid wing design aerodynamically, and a low wing design in its landing gear configuration. Look at a Corsair and there is no fairing at the wing root you normally see on low wing fighters. No fairing was necessary.

The Thorp T-18 homebuilt addressed the problem to avoid an acute angle at the wing to fuse junction, with a simple low wing, by starting the dihedral half way out on the panel, so that the mid section of the wing was flat and came out of the slab sided fuselage at 90 degrees (most T-18s use a very small fillet fairing at the back to reduce turbulence from flow separation aft of the thickest part of the wing, although some builders go with fancier ones). Thorp got the added benefit of a panel that could be built in two 4ft panels with the dihedral joint between them, allowing the wing to be skinned from a single trailing-edge-to-trailing-edge wrap of a 4 ft sheet of aluminum for each panel. Very easy to build. 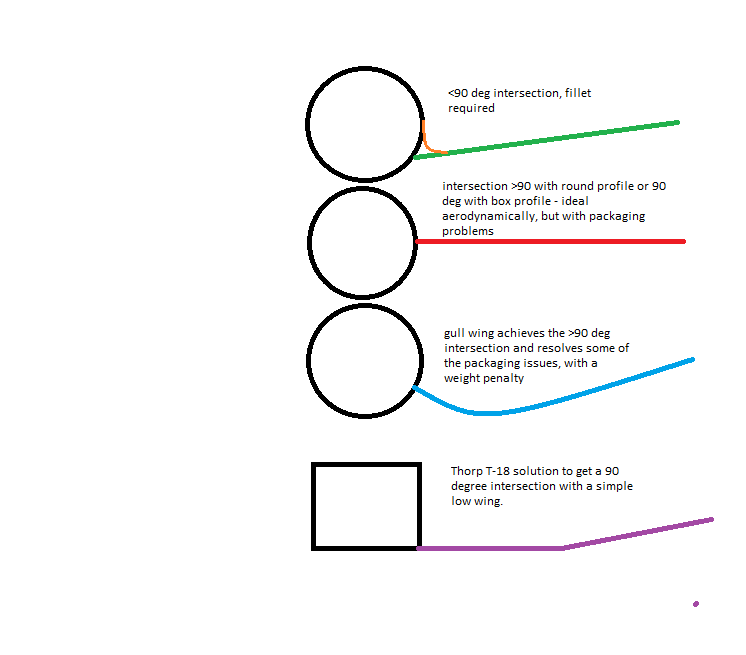 It's not that simple (even if we consider only aerodynamics and ignore structural and stability issues). In many practical cases, the top wing is as good or even better than mid-wing.

The culptit is, of course, interference drag: the drag that appears when we combine two or more bodies, as compared to these bodies isolated in the same stream. Like any other drag, it depends on the conditions, apart from the bodies themselves.

In some conditions, interference drag may be even negative. For example, with zero wing incidence and zero angle of attack, many configurations will have slight negative interference drag (that is, total drag of the wing+body combination will be lower than that of the sum of the isolated wing and body). In this trivial case, this is because part of the wing is covered by the body (fuselage). (Remember that by convention, wing is continuous tip to tip, including the part within the fuselage).

But the more practically relevant and interesting cases are when we have some angle of attack and lift. In this case, two main things will happen:

Now, there are two main practical consequences of these effects:

1 It's always helpful to remember that the section of fuselage between the wing halves does create lift - much more of it than an isolated such section, although, of course, less than a wing section. The spanwise lift distribution doesn't drop to (near) zero at the fuselage. But the distortion itself is a source of interference.

2 But in practice it often has a 'flat' right-angle interface anyway for structural reasons.

There are mainly three types of drag that affect an aircraft: Form Drag, Induced Drag, and Interference Drag. Interference drag is the drag created by two bodies that intersect with each other creating turbulent airflow. 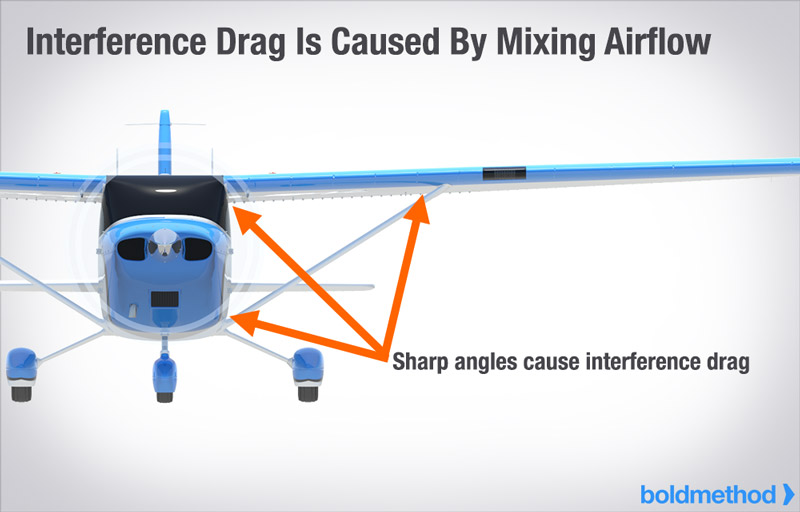 It is because of interference drag.

Wings create lift by pushing air downwards, as per Newton's third law. They do so by suction on the top, and (usually) lack thereof on the bottom. The airflow leaving the trailing edge of the wing as a downward component.

Having the wing meet the fuselage at an angle less than 90 degrees, as is the case with a wing on top or bottom of a round fuselage, obstructs this flow.

In a high-wing configuration, the downward moving airflow leaving the wing creates pressure on the top of the fuselage, creating negative lift.

In a low-wing configuration, the suction zone at the top of the wing acts on the bottom of the fuselage, again creating negative lift. 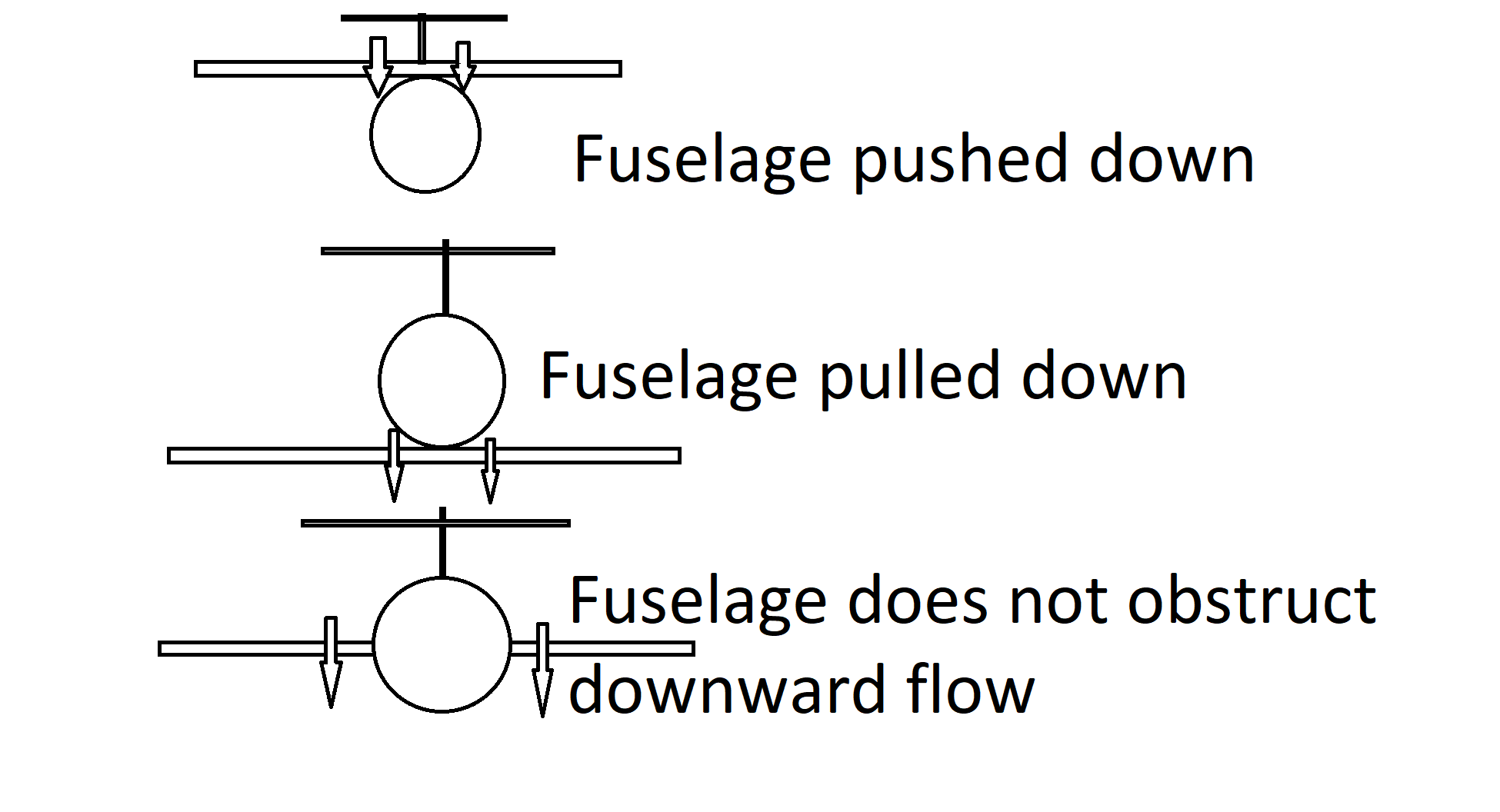 So lift is reduced.

Not the answer you're looking for? Browse other questions tagged wing drag or ask your own question.

17
Why does the Beech Staggerwing have its low wing ahead of the high wing?
21
Why do (almost) all military transports have high wings and civilian transports low wings?
15
Do some light sport aircraft have clipped wings to lower their cruise speed?
2
Does waverider have much lower drag than Sears Haack body?
6
Why is induced drag less on a high span wing?
6
How does the wraparound wing design reduce drag?
1
How does wing aspect ratio influence lift and drag?
1
Why is a reduction in lift called 'drag'?
1
Can winglets be used to compensate the high induced drag created by a low aspect ratio wing?
1
For subsonic aircraft, would adopting a higher wing loading decrease drag?