Has anyone built an aircraft with a flat ring wing?

When I try to search for circular wing aircraft, everything I find has the wing loop up over the top of the craft.

What I want to see, however, is basically an Aerobie Flying Ring, but with a motorized propeller, etc.

I'd be equally happy to see a "real" plane, or an RC one.

Also, while I would expect the wing to be attached to the fuselage via cables, I'd be equally interested in learning about alternatives (e.g. blended wing).

George Kitchen patented a design and half-built a biplane. It was completed by Cedric Lee and Tilghman Richards in 1911 but failed to fly. Richards went on to develop a series of increasingly successful Lee-Richards annular monoplanes before the outbreak of WWI.

This was a serious and promising design, having been wind-tunnel tested by the National Physics Laboratory in the UK during development. Kitchen and Richards understood that the strange shape would create vortices which trailed back over the rear part of the wing, and they used these to help impart stability. The monoplanes were indeed all safe and stable in flight (although the first was tail-heavy), a rare characteristic in those days. Pilots included Gordon England, Gordon Bell and NS Percival. 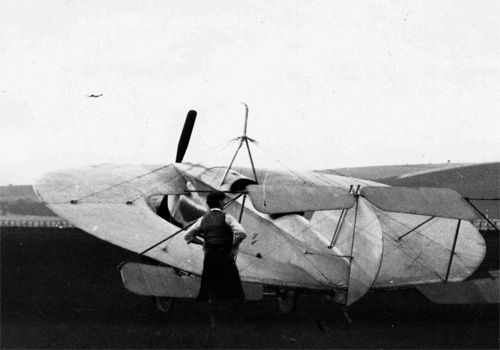 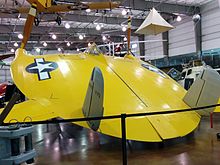 I doubt that, since it wouldn't make much sense.

The aerobie, like frisbie, is spin-stabilized, which is why it is round. But that does not allow controlling it. Controllable aircraft don't spin, so they don't get any advantage from being round.

On the other hand the shape would be very complex, because the profile would have to change depending on the local flow direction. Airfoils that work in both directions are not very good; see Is there an aerofoil that gives reasonably good lift for both air flow directions: forward and backward? That is good enough for aerobie, which at its size has much lower mass for surface area, but wouldn't work for a full-scale aircraft.

And even the complex shape wouldn't be very efficient, because the lift distribution would be far from the optimal elliptic with a lot of lift generated by the sides. The aerobie isn't designed to be efficient at flying at all.

The closest you can have were the experiments with full disk circular wing. Some full-scale prototypes were built, but they didn't show any useful advantage, so all the projects were stopped.

26
Is there an aerofoil that gives reasonably good lift for both air flow directions: forward and backward?

22
How does a flying wing keep from going into a flat spin when maneuvering?
10
What advantages come with the wing on the Boeing Bird of Prey?
8
Where can I find that video of a college built blown wing aircraft?
19
Can any aircraft adjust the wing dihedral in flight?
17
Why was the A380 built with a gull-wing design?
11
Do high-wing aircraft represent more difficult engineering challenges than low-wing aircraft?
4
Why are propeller driven aircraft commonly built with a higher wing aspect ratio and a straighter wing angle?
3
Why does the mass penalty of cantilever vs externally braced wing decrease with aircraft size?
4
Has anyone tested or flown permeable wings to increase efficiency?