Semitailless1 swept-wing aircraft without active stability enhancement2 generally3 have extremely poor handling characteristics, most notably a tendency towards violent pitch oscillations at high subsonic mach numbers, and yaw and roll oscillations at mach numbers slightly beyond this. As a result, while the swept-wing semitailless layout was briefly quite popular for transonic and supersonic aircraft in the late 1940s and early 1950s (witness, among others, the DH 108, X-4, and F7U), it was quickly abandoned, only making a comeback much (much) later, with the advent of computerised active-stability-enhancement systems.

In the meantime, supersonic aircraft near-universally switched over to delta-winged layouts, which worked just as well for supersonic flight and had none of the nasty quirks of semitailless-swept-winged layouts. This despite the two layouts being extremely similar; indeed, a semitailless swept-wing aircraft can be seen as a delta-winged aircraft with part of the inboard trailing edge cropped out: 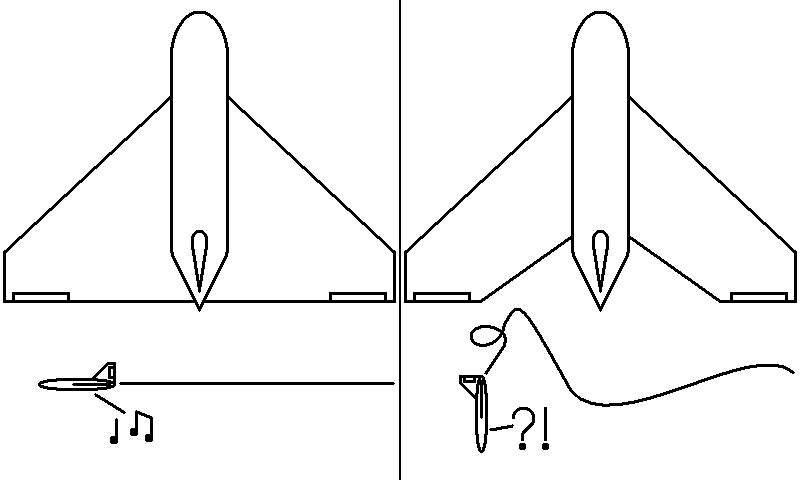 Why do two such similar layouts have such different handling characteristics?

1: Aircraft that do not have a separate horizontal tail, but do have a vertical tail.

2: A system where a computer constantly monitors what the aircraft is doing and continually makes tiny flight-control inputs to keep it doing what it's supposed to.

The function of a "tail" in this case is pitch stability. Therefore, all stable aircraft must have "tails". Aerodynamically, the rear portion of the delta is its tail. Removing it should have predictable consequences, even in the subsonic realm.

Subsonically, the swept tailless design can be helped by "washing out" (lowering the AOA of) the wing tips or by adding slats, which helps control movement of the center of pressure at higher angles of attack. As Dunne ingeniously realized over a century ago, this design made for a stable aircraft. Indeed, a swept wing aircraft with insufficient tail area could be helped with stronger slats! (If the wing tips can handle the extra load).

Transonic and supersonic flight is another issue. The notion of "taillessness" was a blind alley in aviation design, a mistake not to be repeated.

The pitch oscillations come from the transsonic air coming off the main wing and interacting with the elevators/Stabilators. If you look at the variants of the X-1 you will see that the one that broke the sound barrier has its elevators further above the main wings than the previous models

Not the answer you're looking for? Browse other questions tagged aerodynamics stability wing-sweep delta-wing transonic or ask your own question.

6
Why didn’t the Me 163 experience the serious handling problems suffered by other similarly-designed semitailless aircraft?

5
Why do 20-series Learjets have such an extreme susceptibility to mach tuck?
1
Why do oblique-wing aircraft suffer from significant aerodynamic cross-coupling?
8
For aircraft with variable-sweep wings, how unstable is it to have each wing in a different position?
6
Why didn’t the Me 163 experience the serious handling problems suffered by other similarly-designed semitailless aircraft?