How does an outflow valve work mechanically?

Under Environmental control and oxygen systems chapter of Aircraft Maintenance and Repair book by M. Kroes, there's an topic of working of the outflow valve 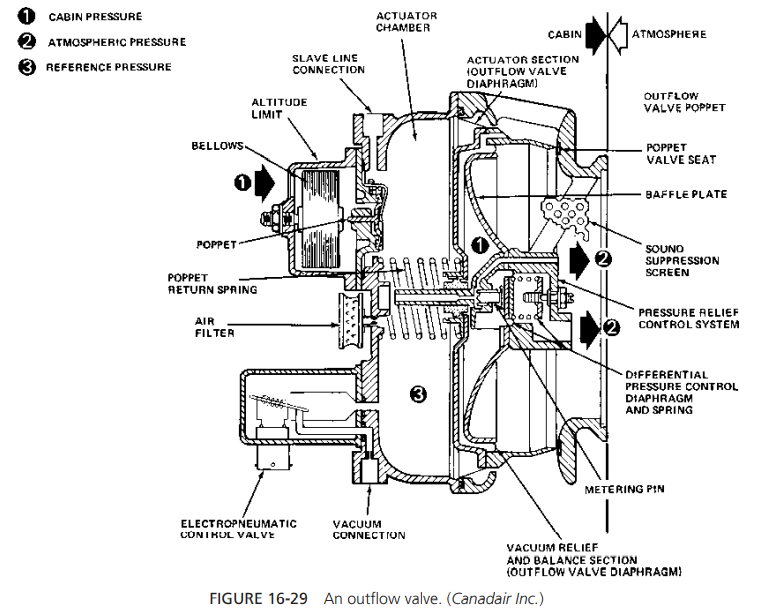 The diagram is of a valve that also works an altitude limiter and positive pressure relief valve. What I don't understand is the working of this valve from the diagram.

The text explanation states, when cabin pressure reduces below a preset value the bellow expands and it moves the poppet and introduces reference chamber air in the case, effectively closing the outflow valve. How is the outflow valve connected tp the bellow chamber?

Above is the explanation from text.

The driving force for the valve is a vacuum source that is connected at the vacuum connection at the bottom of the diagram. The valve operates by varying suction to chamber 3, creating a pressure differential between 3 and 1 (cabin pressure) that allows the pressure in 1 to drive the valve open (to the left in the diagram) against the return spring. Take away the vacuum, and the spring will close the valve (move to the right).

The vacuum source is usually an ejector pump in the engine bleed air plumbing, so the vacuum is available whenever the bleed system is on.

So in other words, the valve is sucked open (by bleed-powered vacuum), and sprung closed, and is modulated by varying the suction (by the electropneumatic control valve) against the constant spring pressure. More suction moves in more open, and less suction moves more closed, and if the suction is completely removed the spring fully closes the valve.

On transport aircraft there are normally two outflow valves for redundancy, but both will usually be located next to each other, typically at the rear pressure bulkhead, and all of the air in the pressure hull will exit at that spot, all of the pressurized zones being interconnected. Where separated spaces are vented to each other in the pressure hull, but would have a hard time equalizing quickly in a rapid decompression event, like a cockpit bulkhead with the door closed, there will be special blowout panels (like in the cockpit door or elsewhere on the bulkhead) to allow equalization to occur rapidly.

You will also typically find a separate dump valve that opens on on the ground to keep the aircraft from being (slightly) pressurized by ground cart inflow when the bleeds are off and the outflow valves are closed (which can cause problems with opening plug doors), and also to provide an exhaust path for avionics cooling during ground operation with the main doors closed.

The opening size of the pressurization outflow valve has to be large enough to allow more air out than the maximum bleed flow in, so it has to have a fairly large exhaust opening to be able to control pressure at the margins with the pressure hull as airtight as it can be.

Aside from altitude, how much the valve opens in normal flight depends on the main air conditioning bleed inflow (which is usually constant, being regulated bleed flow) and how leaky the hull is (an older airplane with worn door seals, leaky rivets etc, can be quite leaky, and the valve may run pretty much almost fully closed some of the time because of all the air that is getting out through other points - if you've ever been at the forward galley area and wanted to hold your ears due to some crazy howling sound, that's a door leak, and the outflow valve will be running more closed than normal to compensate).

The pressurization outflow valve picture you have in your question is one used on quite a few aircraft. In chamber 3, there is a spring that pushes the outflow valve closed. Walking out to an aircraft without the engines running, we can be assured the outflow is spring-loaded closed.

On the bottom left of chamber 3 is a vacuum connection. That vacuum connection is connected to a vacuum pump or ejector pump. It is typically regulated to a certain PSI lower than cabin pressure. On the jets I fly, the "vacuum" control pressure is regulated to 4.5 PSI lower than cabin pressure. We are not talking about absolute zero pressure but a PSI lower than cabin altitude. As an example, sea level pressure is roughly 14.7 PSI. If the cabin was at sea level, the control pressure would be 10.2 PSI. That difference of 4.5 PSI is sufficient to pull against the spring and open the outflow valve allowing cabin air to rush out around it to the outside.

Section 1 uses cabin pressure and compares it to outside air pressure. If the cabin altitude is ever higher (lower pressure) than outside altitude (higher pressure) that will in turn cause a suction and the outflow valve will open. It ensures the cabin will not have a negative cabin differential.

Section 2 appears to be an over-pressurization relief valve. If the cabin differential is too great, the diaphragm and spring will actuate causing the outflow to open to raise cabin altitude (or lower cabin PSI). This in turn will lower differential pressure so the pressure vessel doesn't explode.

Not the answer you're looking for? Browse other questions tagged aircraft-systems aircraft-structures or ask your own question.

31
What is propeller / engine sync and how does it work?
35
How does WiFi work on an aircraft?
6
How does terrain alert system work?
7
How does the MiG-23 fuel system work?
3
How does hydraulic actuator servo valve feedback work?
1
How does a circulation control helicopter work
2
How does a flux gate compass system work?
0
How does the B777 Side brace locking mechanism work?