Can the plane Celera 500L be eight times more fuel efficient than a jet of similar size and capacity?

Celera 500L (see Otto Aviation site for more details) is a plane with a single propeller powered by a piston diesel engine. The constructor claims it is 8 times more fuel efficient than a jet of about the same size and capacity. How is this possible? Another question would be: Is this flying apparatus at least twice as efficient as the best piston engine plane of comparable characteristics? 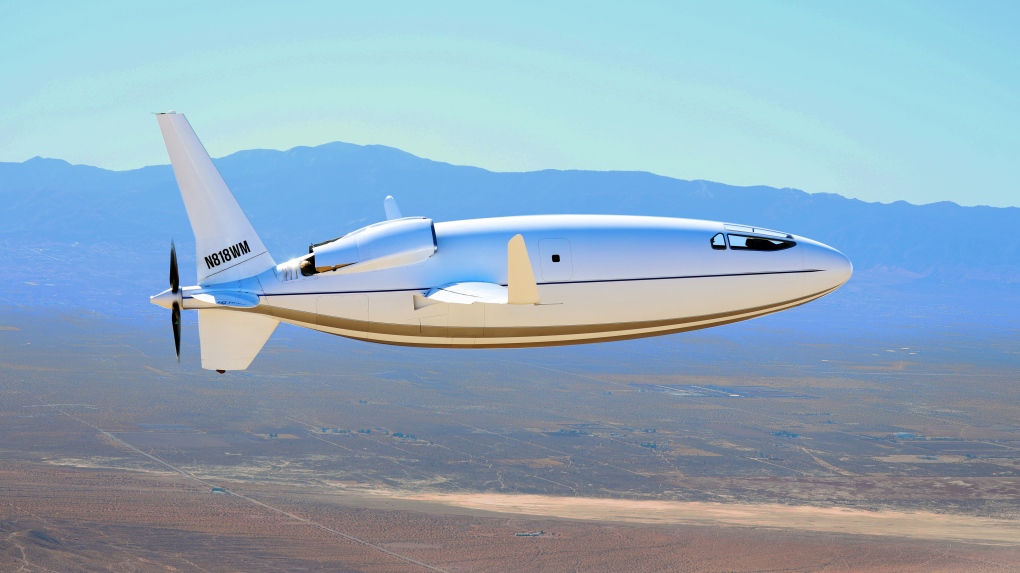 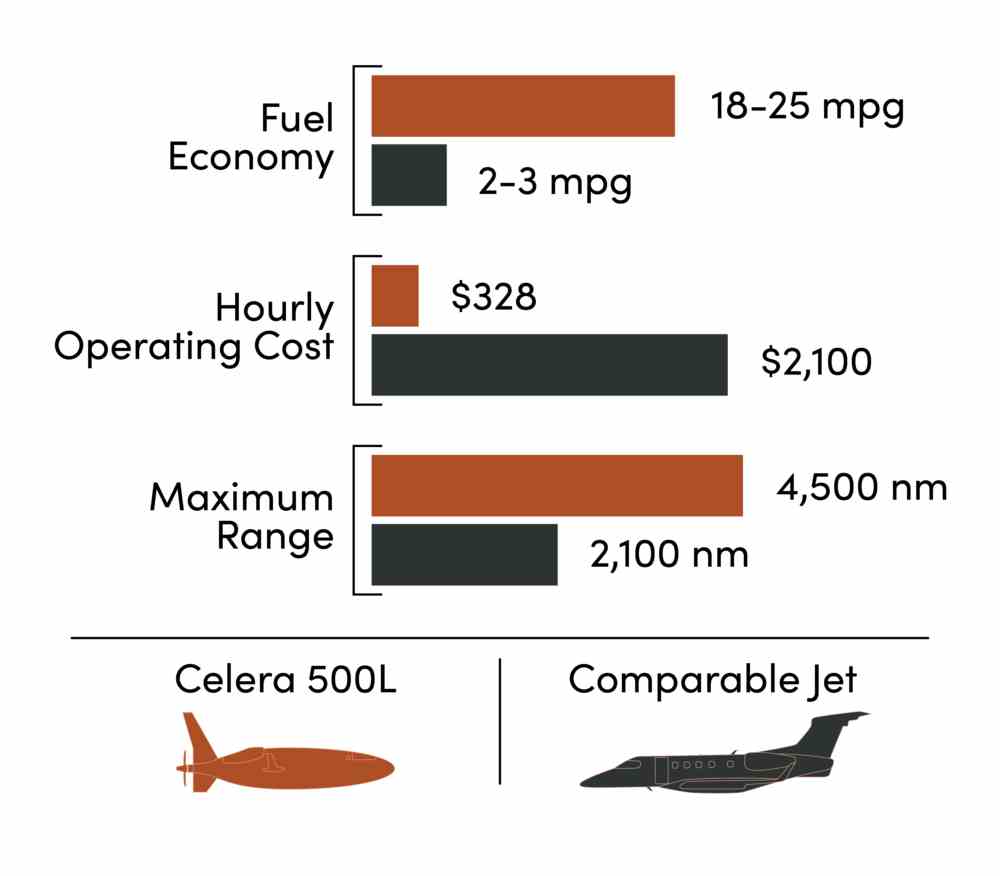 Claimed comparison between Celera 500L and a Jet

"[Celera 500L] is a six-person private craft that promises to fly at jet speeds, but with eight times lower fuel consumption, and a range that's twice that of a comparably sized craft."

"The company, founded in 2008 and an offshoot of Bill Otto's Otto Laboratories, says that the Celera 500L runs at 18 to 25 miles-per-gallon fuel economy (compared to the 2-3 miles-per-gallon of a comparable jet aircraft).

"Then there are the modest $328 hourly operating costs, which are about six times lower, and the generous 4,500-nautical-mile range. Maximum cruise speed is projected to reach more than 460 miles per hour."

"The reason its aircraft can do all this, says Otto Aviation, is down to laminar flow.

"Laminar flow is the minimum drag solution for aircraft surfaces, explains its website, and features smooth layers of airflow with little to no mixing of adjacent layers."

"With its aerodynamic airframe meaning it requires a lot less horsepower to achieve takeoff and cruise speeds, the Celera 500L is powered by the RED A03 engine. It has a Liquid cooled V12, twin 6-cylinder bank and, says Otto Aviation, offers best-in-class efficiency. It's certified to operate on Jet A1 and biodiesel."

According to a patent granted to William Otto (US9669939B2, "Aircraft supplemental thrust device and method of operating the same") Celera 500L has a service ceiling of 19.8 km!

I have seen on Otto Aviation's site this text:

and I believed that the projected service ceiling of the plane is 9.144 km not somewhere between 15.2 km and 19.8 km. At such high altitudes the air density is between 0.2 and 0.1 kg/m^3 and in consequence Celera can, in theory, reach 740 km/h with 550 hp. The Grob Strato 2C, a German experimental high altitude research aircraft, powered by two turbocharged piston engines, reached a record altitude of 18552 m on 4 August 1995, with two 6 m in diameter propellers, using a total of 800 hp.

tl;dr: L/D of the airframe and specific fuel consumption of the engines are credible but that doesn't add up to the claims made regarding fuel consumption and speed relative to jets. Laminar flow seems to be used as the snake oil to sell this to gullible customers.

The fuselage shape is inspired by a laminar flow airfoil, like the NACA 64-021 shown below, courtesy Airfoiltools:

Now let's have a look how much laminar flow will be possible. Flight speed is claimed to be 205 m/s in maybe 25,000 ft = 7620 m. The Reynolds number per meter in these conditions is 7,314,000. Flat plate flow shows laminar to turbulent transition at about 400,000. With a stabilizing pressure gradient this can be shifted to maybe 4,000,000. So the first 55 cm of fuselage length will exhibit laminar flow but then turbulent transition is unavoidable. I cannot find dimensions for the Celera 500 L, but I think it is fair to say that laminar flow on the fuselage is insignificant. This corroborates well with other aircraft for which a lot of laminar flow had been claimed.

Still, the very clean shape gives it a clear advantage. Add to that high aspect ratio wings with laminar flow, and Otto Aviation's claimed L/D of 22:1 is entirely credible.

Now for the engine: Diesels achieve 220 g/kWh since decades. RED gives 210 g/kWh for the A03, which is again entirely credible. The comparison with turbine engines is complicated by the fact that they define specific fuel consumption per unit of thrust, so we need to look at the engine-propeller combination at 205 m/s. The propeller on the Celera 500 L has five blades and a rather small diameter for take-off rotation and to keep tip speeds subsonic, so its efficiency will maybe be 82%. If we run the A03 at 92% which is its stated maximum continuous power of 338 kW, thrust will be 1352 N and fuel efficiency will be 52.5 kg/kNh which is the same number as what the GEnx-1B64 achieves in cruise. Let's be realistic and double that number for a regular small jet engine (Published numbers are for static conditions and cannot be directly compared. Doubling them for cruise conditions is a good approximation. These numbers are representative of older jet engines and grow by a factor of maybe 1.5 for cruise).

Now we need L/D figures for small business jets. This source doesn't cover jets but shows that small land airplanes with retractable gear still achieve values between 13:1 and 18:1, so even a combination of a 1950's jet engine and an average airframe will only have four to five times the fuel consumption compared to the Celera 500 L. Four, not eight!

For an L/D of <9:1 the comparison airplane needs a fixed gear or floats. With standard design and built any competitor should at least get 13:1 or better.

Sanity check: If the 22:1 L/D can be sustained up to cruise speed, the whole aircraft cannot weigh more than 3033 kg, which is less than half of a King Air 350 which Otto Aviation uses for cabin size comparisons. The King Air, having a smaller cabin and lighter PT6A engines, still needs an MTOW of 6800 kg. Judge for yourself …

Otto Aviation has done everything right, engine choice, propeller position, wing and fuselage layout all support the lowest possible fuel consumption. However, the existing aircraft aren't so poorly made in comparison, either. Also, the installed power looks impossibly low for the claimed cruise speed. In order to fly most efficiently, the Celera 500 L needs to cruise at a much lower speed.

I know a bit about the Strato 2C. It was too heavy for its intended altitude of 65,000 ft. Wing loading needs to be low enough and the engine has to have enough turbo- and/or superchargers to lift its critical altitude high enough. In case of the Strato 2C, it used two turbocharger stages with inter cooling and one supercharger. The intercoolers determined the size of its engine gondolas, which were huge. Given the small air intakes of the Celera 500 L, it looks like it will only reach 25,000 ft or maybe 30,000 until cooling airflow becomes insufficient to keep the intercoolers supplied. Unless Otto straps a rocket booster to its tail, it will never go to even 50,000 ft.

The following claim was made:

"Otto Aviation explains that the Celera 500L enjoys a 59% reduction in drag when compared to similar-sized airframes." (Source) 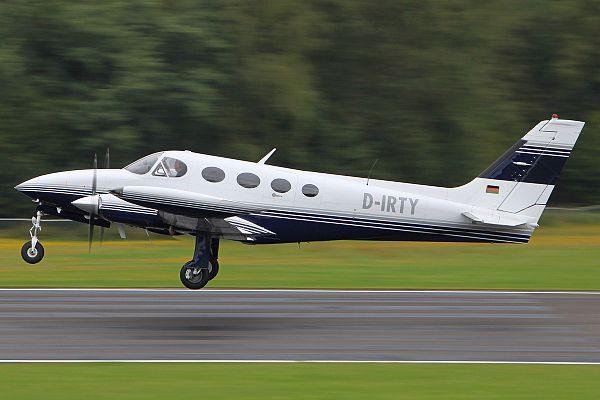 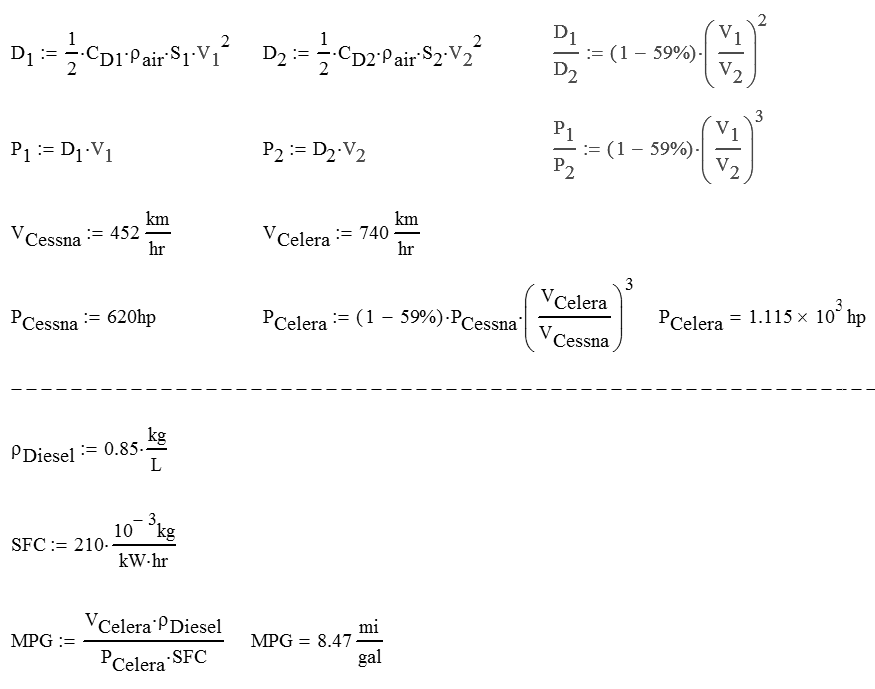 If we are to believe this statement:

To get in the ballpark, one may look at the Predator, Reaper, Avenger drone evolution. Piston prop, turboprop, fan jet progression for more speed using very efficient high aspect wings.

A useful efficiency comparison metric amoung transportation vehicles is ton mile/gallon. It is important to note 460 mph aircraft (275 mph indicated) weighing 3 tons that get "18 - 25 miles per gallon" simply do not exist. Not even close. This is the most dubious claim. 18-25 ton miles per gallon is more like it.

So how do "gas guzzling jets" do well in this competition? The ability to continue generating thrust at higher altitudes. Piston engines struggle to get enough air and do not generate enough horsepower to effectively turn both the prop fast enough to generate adequate thrust and run the compresser at higher altitudes Adding to their woes is the reduced efficiency of the prop as forward speed increases. Additionally, in thin air, there is little doubt that the tiny Celera prop must go supersonic. A 550 horsepower piston engine doing all that? Not likely. The aircraft in its current configuration may reach 200-250 mph TAS.

Jets shine at higher altitudes in the "tons" and "miles" categories even though they are worse in "gallons", taking advantage of their ability to provide adequate thrust in thinner air.

Much to my surprise, the 450 mph Avenger drone came in at 50 ton mile/gallon, while the slower turbo prop Reaper manages around a fairly typical 25. An improvement on 25 at Reaper airspeeds is what we may expect from the Celera 500L.

Generating enough thrust high will be the challenge with this design, giving them credit for reducing fuselage drag.

Amazingly, compression of an adequate mass of air to generate sufficient power to fly high ... is what jets do best. I would be looking at those drones.

Conclusion: this design may offer improvements in fuel efficiency over similar sized prop driven piston engined aircraft. The major concern would be landing speed and the ability to climb to higher altitudes. However, it may find a commercial niche (manned or unmanned) as a shuttle between large airports with longer runways.

Not the answer you're looking for? Browse other questions tagged aerodynamics piston-engine efficiency fuel-consumption or ask your own question.

69
What determines the maximum altitude a plane can reach?
24
How does gas turbine efficiency compare with supercharged piston engines?
15
Is airflow ever laminar in the boundary layer, near the wing leading edge?
3
In high-altitude piston aircraft, what type of forced induction (boost) is used?