What is the reason why dihedrals are used when building a plane? [duplicate]

How does dihedral affect flight characteristics of a plane? I know it increases stability, however is it the only reason why it is implemented? If so, aren’t there more effective methods to stabilize the plane?

Because when an airplane rolls to a bank angle, the airplane begins to slip toward the lowered wing. If the wings are mounted with a dihedral, this causes two things: the inside wing will experience an increased angle of attack, and the outside wing experiences a decrease in angle of attack. This combination causes an imbalance in the lift forces on the wings resulting in a rolling moment about the center of mass and returning the airplane to a wings level condition.

Dihedral angle is much more common on low wing airplanes, since the location of the CG above the CL creates a static unstable roll condition when the airplane is banked. Dihedral angle can be used on high wing aircraft as well to enhance roll stability along with the pendulum effect of the CG below the CL e.g. a Cessna 172 still employs a slight dihedral angle to its wings.

In the age of digital flight control systems dihedral angles to wings are not absolutely necessary, though for light airplanes and gliders it’s far more elegant to design the airplane with a slight natural static and dynamic stability in all three axes. Aircraft designers also work to ensure that airplanes have more authoritative directional stability than lateral stability from a dihedral angle to prevent unwanted Dutch rolling tendencies.

It's when there is an angle between the wing root and the wing tip. Usually a positive angle.

Dihedrals wing are desinged to increase the lateral stability of the airplane. For example, if there is a wind gust (updraft on the right wing) that makes the airplane roll to the left, the result will be a lowered left wing and a raised right wing.

With the dihedral, the lowered wing (left one) has a greater AOA than the raised wing, therefore producing more lift and bringing the dropped wing back to it's original position. 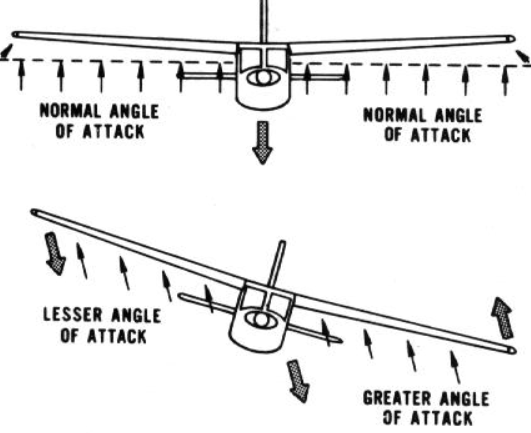 Not the answer you're looking for? Browse other questions tagged aircraft-design wing lift or ask your own question.

4
What kind of dihedral would be most stable?
16
How does the dihedral angle work?
1
How much lift is lost by wing dihedral, and can it be fixed?

17
Why are delta wings not commonly used in commercial airliners?
15
What is the reason for the poor low-speed characteristics of sweptback wings?
16
How does the dihedral angle work?
6
How does rudder size influence its ability to produce lateral lift?
4
Why does the Comet's horizontal stabilizer have so much dihedral?
3
Does dihedral improve roll stability in gusty conditions?
6
Why does a Cessna 172 have dihedral wings if it has high wings?