Does angular momentum contributes in lifting a helicopter? [closed]

I want to know whether it is possible to make a helicopter with blades that rotate counter-clockwise (CCW) seen from below. I have difficulty understanding the angular momentum in this situation.

As we may see in the picture below, the rotor rotates clockwise (CW) seen from the pilot seat look up. So far, the rotations I have seen. To extend this question: is it possible for a single engine airplane to have propeller rotating counter-clockwise (CCW) seen from the rear, looking in the direction of the nose (as so far, what I found is that every single engine airplane is rotating CW). As we know from physics, the angular momentum of a CW helicopter will be pointing up, and the angular momentum of a single engine with CW rotation is pointing forward. To be clearer: Is there any impact (i.e. power efficiency, etc) if a helicopter's blades rotate CCW (seen from below), or if a single engine plane's propellers rotate CCW? Of course their torques will be different, but it is not the case in my question as long as it is not affecting the performance (i.e. reduce the power efficiency, etc). 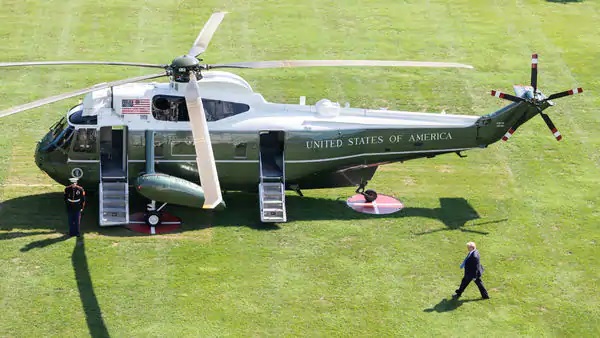 Well helicopters are designed with both types of rotor systems. American built helicopters have main rotors which rotate counter clockwise whereas European built helos have clockwise turning rotor systems. Near as I know there is no particular advantage to one over the other, though you do have to reverse anti torque pedal corrections for collective inputs on a CW turning rotor system vs a CCW system, transverse flow effects are reversed and LTE events are more likely from right vs left crosswinds.

Just to be clear, torque is VISUALIZED as a vector perpendicular to the plane of rotation; it is not a force. If the latter were true, you could propel craft to the moon and beyond using just a gyroscope.

In an inertial frame of reference, with a balanced propeller, there is no fore or aft forces except for the aerodynamic forces, so it will not make any difference if it is a left handed or right handed prop.

Some very strange effects come into play though when you are not in an inertial frame of reference though, if you have a bicycle wheel lying around, hold the axle steady and spin it, you should feel no forces. Now try repeating this while moving around... The forces you feel are sometimes referred to are a result of something with angular momentum moving in a non-inertial frame of reference. In a constantly rotating frame of reference, you have the coriolis and centripetal 'fictitious' forces. When there is acceleration, it gets even more complicated (Eular force).

Given the coriolis effect from the earth's rotation on the scale of a rotating propeller is so small, it is fine to completely disregard it, however there is a tiny difference in forces depending on which direction you are flying.

You are mixing torque with force. Torque is prependicular to the plane of rotation, but torque CAN NOT lift you up, force can.

As we know from physics, the angular momentum of a CW helicopter will be pointing up

No, you have completely misinterpreted what the thumb is in your right hand rule diagram is and have put more stock into its physicality than there is. If we wanted to we could use the lefthand convention instead of the right hand convention in our math instead. Would you be asking if the lift is decreased from the angular momentum in that case?

The upward pointing thumb is just a mathematical definition we use for convenience since it allows us to uniquely define the direction and orientation of rotation in 3D space with just three numbers (one vector) instead of many, many more. By this, I mean that the other way to represent angular velocity is a set of linear velocity vectors all pointing tangentially to the rotation equidistant from the axis of rotation such that translation/linear motions cancels out. That's difficult to work with mathematically and doesn't provide any more unique of a definition of direction than the right or lefthand rule does. That math has then been arranged such that using that convention produces results that make sense in the real world.

What you are doing is a bit like writing down the number 5 to record that there are 5 apples, but then thinking that number 5 is the apples.

Force is a vector, but not all vectors are forces. Vectors that are not forces include:

Some of them may be kinematically/dynamically coupled to forces, or may produce forces via aerodynamic means (e.g. linear momentum through fluid creates aerodynamic forces). But they are still not forces; You can't simply add them up.

Clockwise versus counter-clockwise propellers and rotors are nearly irrelevant. They don’t matter to the performance of the aircraft. They only matter in a difference in flying technique. The Angular Momentum does not contribute to lift in a helicopter nor thrust in an airplane.

The site you reference in your question does not present any force of lift. There is no force implied acting parallel to the plane of motion of a spinning object. Neither the L (angular momentum) nor the omega (angular velocity) produce a force that will act upon an object outside of its frame of reference. In other words, they will not lift a helicopter nor push/pull an airplane. Don’t let the L fool you into thinking that it stands for Lift. It does not.

Take the weighted bicycle wheel attached to handles experiment as an example. Once you start the wheel rotating in open space, its angular momentum will want to keep its position (or at least direction) rigid in space. As long as you keep the handles pointed in a consistent direction, the spinning wheel will provide no force until it makes contact with some surface (torque). The wheel will not push nor pull the person or object holding it. Only if you apply force to change the position of the wheel’s axis (the delta in the equations), will the wheel apply a force to remain rigid in space. Or, it will transfer the force in a direction according to the direction of its spin (gyroscopic precession).

In real world application, this means that you can ride a bicycle without worrying about a force pulling you to one side or another. It is actually easier to balance staying upright the faster the wheels are rotating. You can even ride with no hands touching the bicycle. And, when you do want to turn the wheels, all you have to do is lean to one side or the other. Gyroscopic precession will turn the wheels for you.

Another example is how motorcyclists can stay upright without much motion forward. They rev the engine while engaging the clutch while relatively motionless or at extremely low groundspeeds. Revving the engine spins the flywheel attached to the crankshaft. The flywheel acts like a gyroscope. Again, this provides rigidity in space. It does not matter which direction the motor spins. All that matters is the rotational and angular velocity of the flywheel and the flywheel’s mass.

So, yes both clockwise and counter-clockwise engine-propeller/rotor combinations exist in aviation. The only advantages of one over the other is logistics, not performance.

Not the answer you're looking for? Browse other questions tagged aircraft-design aircraft-physics propeller-aircraft or ask your own question.

22
Why do most single propellers have a clockwise rotation?

10
Does a quadcopter have flight modes beyond traditional aircraft?
22
Why do most single propellers have a clockwise rotation?
8
Do gyroscopic forces (from rotating engines) significantly affect yaw or pitch?
2
Is there any effect that contributes to roll stability even in the absence of sideslip?
3
How does Bernoulli's principle contribute in lifting airplane?
2
Is any convention to tell the propeller rotation direction of an airplane?
0
Are there any helicopters with tail rotors where slip-skid ball may be centered even when fuselage is streamlined to the airflow in cruising flight?
9
Why do the engine nacelles on the P2V Neptune extend so far back?