Piloting as a perishable skill - what skills go first and how to self-assess and mitigate skill loss?

I know that in accident reports they will typically say the total number of hours the pilot had, but also the total hours in type and total hours in the last 90 days. I know from personal experience that landing an airplane can be a perishable skill (I recently went 60+ days since flying and my landings were not the picture-perfect examples they usually are...don't get me wrong, nothing unsafe, just wasn't proud of them...drifting off centerline, excessive float, etc :)

The FAA seems to know this with the 90-day passenger carrying requirement (3 take-offs and landings within 90 days to carry passengers during the day and 3 to a full-stop for night passenger carriage).

All this to say flying doesn't seem to be "just like riding a bike - you never forget it." But in what sense? The muscle memory goes? The "seat of the pants" sensation starts to feel foreign? I know charts can change, regs can change, but do you really "forget how to fly," or just "lose the touch?"

What skills go first, and what is the best way to self-assess your skill quality and mitigate the loss of it?

I have no hard data answers to your questions. Perhaps others will. I can, though, offer some personal observations.

My last two jobs were at 747 carriers. At the first we had two weeks on, two weeks off. At the second, we had 12 days off a month, which, with a little seniority, you could arrange to have as a block.

For me, the first thing to go was my instrument scan, and I used to joke that it took only 4 days of inactivity to lose that. The joking aside, I did notice a slight degradation the first day or two upon returning to work after time off. I should note that my habit was to hand fly the airplane to the first cruise level, and then to hand fly from the top of descent, so I perhaps would notice a bit of degradation more so than those who used the autopilot as soon as possible and until as late as possible.

I retired 15 years ago, and it had been 30 years since I had flown a light single engine airplane when, a few weeks ago, I decided to check out in a Cessna 172. After three sessions, the instructor said he was satisfied. I wasn't and we went out a four time, and he signed me off for my first-ever BFR.

In general, I did a little better than I had expected. In one area, landings, I did a worse. The problem was the sight picture I had in my head from 10 years of landing 747s. On the first landing, knowing that I'd want to flare high, I delayed rounding out until my gut way saying, "if you don't flare, you will crunch the airplane." When I started the flare, the instructor said, "No, you're way too high." I delayed again, then started again, and the instructor said I was still too high." I delayed again, then absolutely had to start again, at which time the instructor said something like, "Well, you're still high but go ahead." That landing was followed by three sessions of nothing but takeoffs and landings. Each session I improved, but, frankly, I have yet to get a really good landing. My next session will be solo and will be nothing but takeoffs and landings.

So, for me at least, I conclude that we don't forget how to fly, but we definite do lose the touch.

After I get the solo takeoff and landings session in, I'm going to go out with the instructor and shoot a couple of ILSs. I'm expecting my instrument scan to be terrible.

The Killing Zone: How & Why Pilots Die by Paul Craig (excellent book) has the results of an FAA study of this question, called Private Pilot Flight Skill Retention 8, 16, and 24 Months Following Certification. This table from the study lists the 27 skills they examined and the percentage of pilots who could perform them to PTS standards: 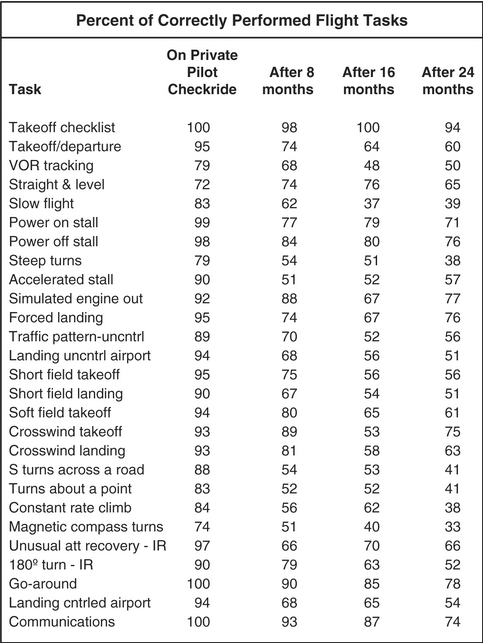 Based on this data, the first skills to go are accelerated stalls and magnetic compass turns: both were at 51% after 8 months. In some cases it seems obvious why the skill degrades: most pilots rarely - if ever - need to make magnetic compass turns so it isn't surprising that that particular skill goes away quickly. On the other hand, after 2 years only 60% of pilots could take off properly, only 51% could land properly at an uncontrolled airport and only 54% at a controlled one. That's all rather worrying considering that pilots usually take off and land at least once per flight.

As for how to assess and improve these skills, you could systematically work through this list in practice flights (like this guy has been doing in his last couple of videos), and/or get a regular review with an instructor. Just because the FAA requires a review once every 2 years doesn't mean that you have to wait that long: every 12 months or even every 6 may be more useful, especially for new pilots. Additional flight training of any kind will also help you to keep your skills sharp: get an instrument rating, commercial license, tailwheel endorsement, seaplane rating, glider rating, checkout in a new aircraft model etc.

But whatever approach you take, the first step is to critically review your own performance after every flight and make notes about what you did well and what you need to improve. If you don't do that, you have little or no chance of coming up with a good self-improvement plan.

I agree with @Terry, but to add a couple points. If I go without flying for an extended period, some skills that I am rusty on are:

As far as emergency procedures, if I'm flying everyday I find it beneficial to do a take-off briefing (failed engine before/after lift-off). When I come back from a hiatus of flying, these take-off briefings take a bit to remember and get back in the groove, reaction time is critical. Sometimes I will practice forced-landings when landing at home (when proficient, it's no big deal hitting your mark). When I'm rusty - it's a bit more sloppy.

As far as getting the feel of the airplane again, some things I notice are landing too fast, maintaining coordination takes a bit more work (muscle memory). Basically, just general flying skills.

The best way to mitigate the loss is to fly at least once a week, even if it's just a trip around the pattern, that will help tremendously.

its says "aircraft," so I will answer for the categories and ratings I hold:

“If I don't practice one day, I know it; two days, the critics know it; three days, the public knows it.”

This is a big question to unpack and I don’t know if it has ever been studied. I would guess this really depends on the pilot in question and their personal strengths and weaknesses in their airmanship. Some people need constant practice in certain areas to remain proficient where as other skills are not that much of a struggle.

What I’ve found is, with lack of practice the first big thing to go is what I call “being in the groove”, that is being unconsciously competent with all aspects of the operation of the aircraft so I can control it with brain stem flying and leave a lot of my higher cognitive capacity free to handle higher order tasks and unexpected happenings. If I haven’t flown for a while, I feel like I’m stumbling, getting behind the airplane and really have to concentrate on basic flying tasks like attitude, power settings and coordination in turns. I can be behind the ball on checklists and ATC work as well.

One of the earliest things to go can be technical proficiency on complex maneuvers, for instance Lazy Eights, Eights On Pylons, etc. that require a lot of control finesse that can only be maintained with constant practice. Crosswind takeoffs and landings skills, especially in gusty conditions also atrophy quickly.

As Terry points out a lot of proficiency is airframe dependent. Switching between airframes to one which you have not flown in a while can cause proficiency problem, even if you are current and qualified on another airframe due to the quirks or each type.

Emergency procedures are another area that can really languish if not practiced on a regular basis. This is especially true of twins that demand a high degree of readiness an proficiency in the event of an engine emergency during takeoff and landing operations.

If you have been out of flying for a period of time the best advice is start easy and work progressively more complex. You don’t want to just straight into an instrument flight in a new airframe in busy airspace, even if you are current. But som trips around the pattern first of a good weather day with light winds would be a good warm up. Also consider making the first flight dual with a flight instructor to get you back up to speed.

As for skill assessments, you can use the ACS guide for your level of pilot certificate as a basic yardstick. Fly a task listed therein and then review what you did against that standards set there. Can you meet both the knowledge, risk assessment skills and performance requirements listed? If not what went wrong and how can you fix it? Also go up and fly with a CFI or flight examiner and see what they think.

The only way to mitigate the degradation is with constant practice. There is no other way to stay proficient and current.

Not the answer you're looking for? Browse other questions tagged general-aviation pilot-technique or ask your own question.

2
Why don't all pilots receive at least basic instrument training?
2
Is there any publicly available research that projects pilots' loss of proficiency due to lack of flying (or guidelines to prevent it)?
-1
How much hand-flying does a commercial pilot do?

5
What techniques professional pilots use to keep their piloting skills sharp when not flying for an extended period?