Going through FAA's aircraft maintenance manual I came across a topic under braking systems, which had two different types of brakes: multiple discs and segmented rotor disc brakes

Looking at the their construction: Multiple discs brake 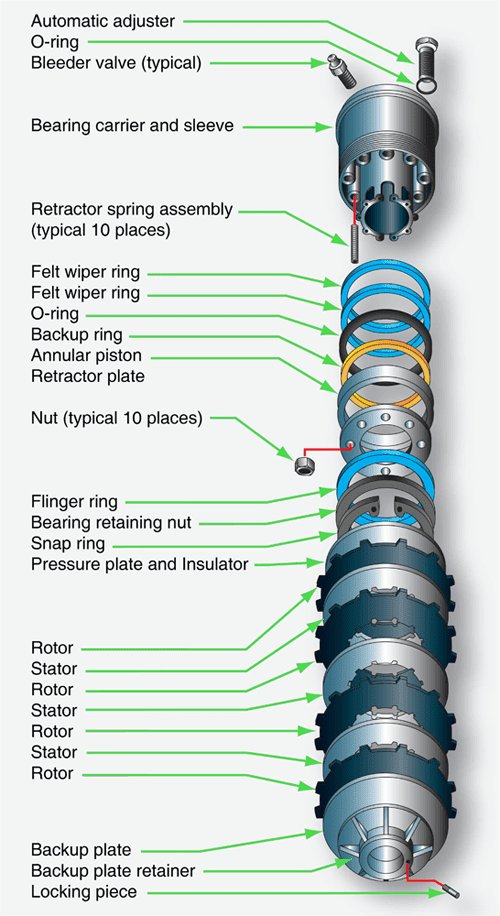 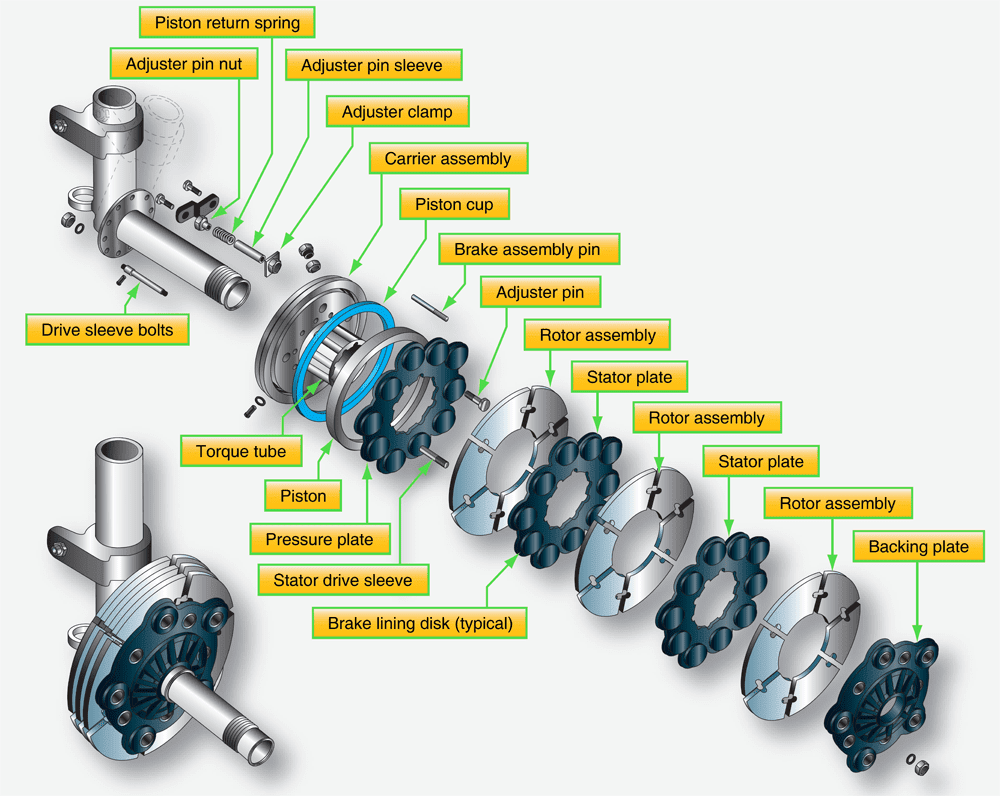 These look pretty much of same construction.

Also, reading through the description, I couldn't find much information apart from just that "Segmented rotor disc brakes are used on even higher performance modern aircraft"

How are they any different? Or am I missing something here?

More properly, both types are multiple-disc brakes. Disc brakes, in turn, can be either continuous or segmented.

Regular continuous disc brakes are somewhat similar to car disc brakes, except for the brake pads being replaced by an entire stator disc. The calipers can be placed in one spot, like on a car, or on larger planes spaced symmetrically around the disc, and the areas away from the calipers are only pressed against the rotor by the pressure plate's and the stators' rigidity.

Much of this action is lost as the discs heat up and expand, causing them to warp. When the discs are warped, only the closest part of the disc keeps making contact. The pressure is very inconsistent among the disc, governed by geometry; something will touch, but it's a few radial lines across the disc, not the whole.

Segmented disc brakes return to (semi-)individual brake pads, spaced around the disc evenly, with a caliper per each brake pad. Most importantly, the rotors are split into separate sectors (only loosely connected around the carrier), so they get room to expand in all directions.

When a segmented disc expands from the heat, the sectors almost touch, but without significant warping. And each brake pad is forced against the rotor by its own caliper (even though there's a pressure plate in between); they are less fixed geometry and more fixed pressure. The theoretical contact area is smaller overall, but it's maintained constant even as the brakes heat up. All of the brake pads keep creating friction against the rotors at all times.

I could probably sketch something up, but you can as well do an experiment - push two plates of any material firmly against each other with your hands and rotate them against one another. It won't be difficult to do, even if they're rough, because your hands aren't very rigid, not ensuring constant contact areas. Now place a few clothespins around their perimeter. You'll notice that they'll become much harder to turn against one another, even though the clothespins are weaker than your arms.

Regular disc or multi-disc brakes clamp only a small part of the disc, with rigidity somewhat helping elsewhere, like with two plates held in your hands. Segmented-disc brakes rely entirely on the latter effect, braking at multiple very firmly clamped areas across the disc stack. They provide strong braking torque even when very hot.

Not the answer you're looking for? Browse other questions tagged aircraft-structures braking airframe or ask your own question.

12
What are the relative braking contributions from wheel brakes, spoilers and thrust reversers?
1
What brakes are used between line-up and takeoff?
5
Do parking brakes lock the wheels and airframe together?
6
Are the captain's and first officer's brake pedals always mechanically linked?
6
What is the average weight difference between composite and metal airliners?
6
What's the difference between setting auto brakes to MAX vs. RTO in Boeing Aircraft?
4
How should ground crews act to safely extinguish an airliner's brake unit fire?
15
Why does the Eurofighter Typhoon pitch up on brake release?
4
What is the difference between a wing station and wing buttock line?