I have seen this part on a me 262 model kit but I don't know what it is... I've make some research on it but I find nothing! Maybe it can be radar, or a weapon? Do you know what is this? And also its function? 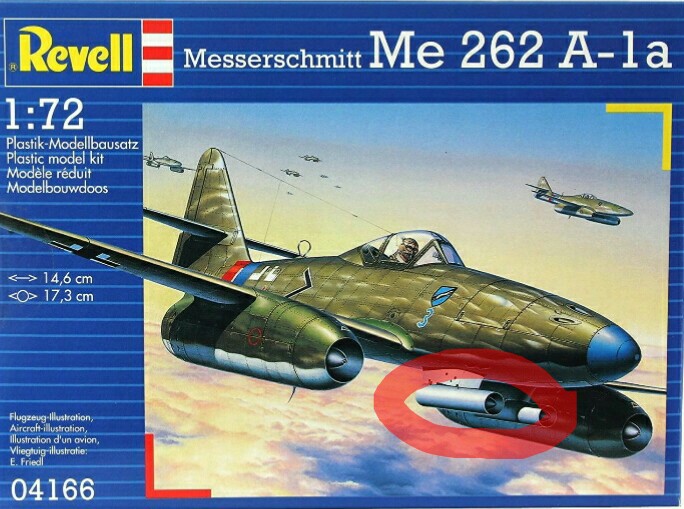 They are Werfer-Granate 21 rocket launchers -

The Werfer-Granate 21 rocket launcher, also known as the BR 21 (the "BR" standing for Bordrakete) in official Luftwaffe manuals, was a weapon used by the German Luftwaffe during World War II and was the first on-board rocket placed into service by the Luftwaffe, first introduced in mid 1943.

On the Me262 they were mounted one each side of the nosegear well.

This is the exact aircraft your model is based on -

Messerschmitt Me262A-1a 'Green 3' of the Geschwaderstab [headquarters unit] of JG 7 prepared to move off across the concrete surface at Brandenburg-Briest in February or early March 1945. The aircraft, finished in a relatively rare application of streaked horizontal lines, has been fitted with a pair of 21cm WGr air-to-air mortar tubes visible beneath the fuselage aft of the nose wheel. (source)

Not the answer you're looking for? Browse other questions tagged feature-identification radar wwii or ask your own question.

9
What are these parts on STOL/bush planes?
19
How did the gyro gunsights of WW2 get the range and lead of a target?
9
What are these windows/portholes on the English Electric Canberra bomber?
6
Why doesn't a radar-equipped Tower say "radar contact"?
3
What are these openings on the TBD/TBM Avenger?
10
What is this WWII four-engine plane on skis?
10
Did WWII fighters do a roll before engaging to identify themselves to radar operators?
10
What is this unit above the autopilot panel in Boeing test aircraft?