Can winglets be used to compensate the high induced drag created by a low aspect ratio wing?

In the lens of potential theory, we can explain and predict the efficacy of winglet through how much it dilutes the trailing vortices strength. Just like we can show that the Elliptical lift distribution produces the least induced drag for a given span length on a flat planform, we can equally derive the optimal lift distribution for any wing+winglet combination of arbitrary winglet height and cant angle.

The graph below, collected from Drela, Flight Vehicle Aerodynamics, shows parametrically how the most optimal induced drag of various winglet extensions and cant angles compare against the flat Elliptical drag, if the total lift on the wing is fixed. $h_{winglet}$ is the vertical height of the winglet above the planform plane, and $\theta_{winglet}$ is the cant angle measured from the planform plane (0 means a simple span extension, while 90 means a perpendicular winglet). 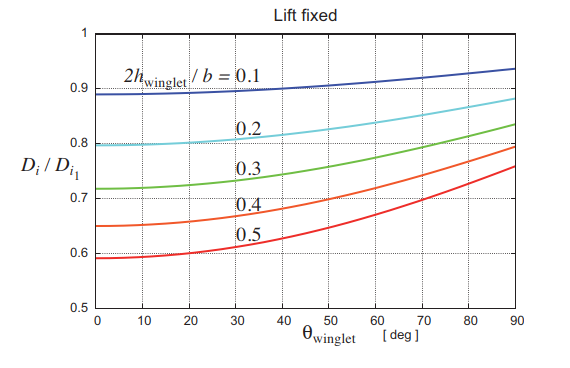 As you can see, a simple span extension ($\theta_{winglet}=0$) is always better. For example, to achieve the same induced drag reduction as a span extension of 20%, we must have a vertical winglet whose combined height is 40% span (assuming we don't allow span extension whatsoever).

I must stress that the results above are a comparison between the most optimal planform + winglet combinations. Optimality means that when the winglets are attached, the wing itself is modified to achieve optimality. In practice, with the wing itself fixed, you could only do worse.

Consider two wings of equal area, one with half the span and twice the chord so it has a quarter the aspect ratio and four times the tip losses.

Now add winglets, which are sized according to the chord, so the low-span wing will have winglets twice as tall. The winglets recover say 50% of the tip losses. Although the large winglet recovers more efficiency as an absolute value of drag, the short-span wing lost so much in the first place that it still loses twice as much as the high-aspect-ratio wing.

So no, winglets are no substitute for aspect ratio. In typical applications they allow a modest reduction in span, of roughly the height of the winglet on each wing.

Not the answer you're looking for? Browse other questions tagged aircraft-design aerodynamics wing winglets wing-tip-vortex .

57
Is a winglet better than an equal span extension?
2
Elliptical wing planform and elliptical lift distribution