How does one resume a VNAV climb in a B737 NG after being instructed to level off at an altitude below the Cruise altitude?

So your CRZ page shows your cruise altitude as FL 410, but you've leveled off at FL370, which is what's in your MCP Altitude window. Now ATC clears you to climb to 410.

You set 41,000' into the MCP Altitude window. At this point, your FMA vertical mode changes from VNAV to Altitude Hold. The light in the Alt Hold button is on, and the light in the VNAV button is not. To initiate the climb, press the VNAV button, and observe the FMA change from ALT HOLD to VNAV Speed. At this point, the autothrottles advance the power, the autopilot increases the pitch to maintain your FMC-computed airspeed, and you're climbing again.

The key is that when you initially leveled off at FL370, the FMA stayed in VNAV Speed, but as soon as you changed the MCP Altitude, the FMA changed to Altitude Hold. Thus, one tap on the VNAV button re-engages VNAV & you resume the climb.

Side note: why doesn't the FMA change immediately to Alt Hold when you level off at 370? While Boeing may have another answer, my best explanation is that if you change your cruise altitude in the FMC from FL 410 to FL 370 after you leveled at 370, you stay in VNAV, and the FMA just swaps from VNAV Speed (i.e. the climb mode) to VNAV Path (i.e. level-at-cruise-altitude mode). So at the intermediate level-off, it stays in VNAV, waiting to see if you'll reset the MCP altitude (to continue the climb) or if you'll reset the FMC cruise altitude (to make this your cruise altitude). In the former case, the VNAV button starts the climb; in that latter case, no MCP buttons need pressing.

The difference in these two cases is being at, or not being at, the FMC cruise altitude. In the case discussed first, you're below it. In the second case, you're at the cruise altitude. In the first case, Altitude Intervention won't help you (because you're in ALT HOLD and not VNAV); pressing VNAV will. In the second case, you're in VNAV, so pressing that button won't help you; resetting the FMC Cruise Altitude (either by entering it in the FMC via the CDU, or by pressing ALT INTV) will.

This stuff is complicated, and the manual doesn't generally do a great job walking through every scenario and "what if". After you've seen it in the jet (or a simulator with good fidelity) a few (dozen) times, it makes much better sense.

I'm not aware of any 737 setup where anything varies varies from what I've discussed above, although if the Smiths FMC is replaced by something else, all bets are off. There are some things that vary from one aircraft to the next (geometric path descent vs idle descent logic being one -- it's selectable by the airline), but nothing here, as far as I know, is in that category.

As far as simulators go, I can't speak to which ones have fidelity to what goes on in the real aircraft or not. (The ones I train in are extremely accurate that way, but they're not running on a PC!)

It seems that there are varying software and it all depends on the specific FMC/MCP hardware installed. See below: 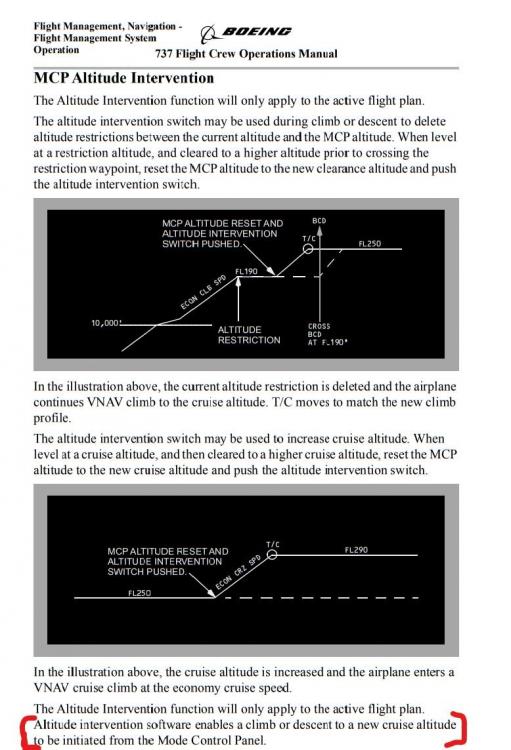 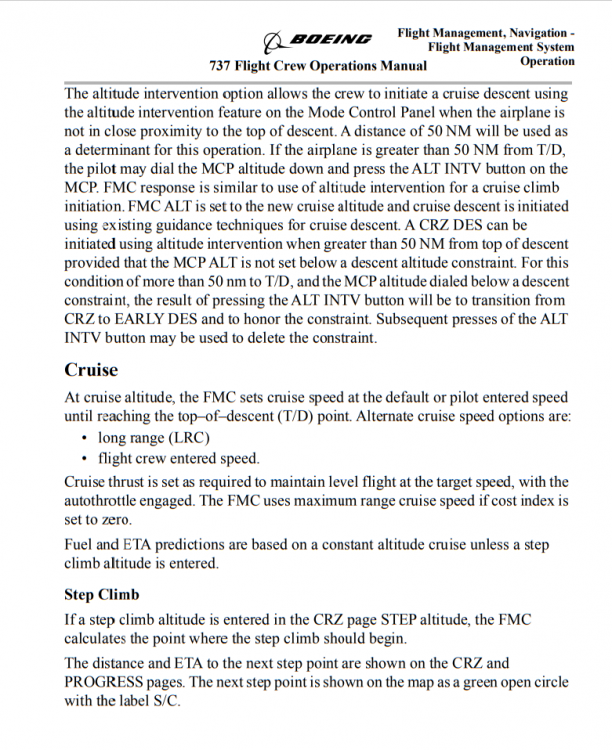 Not the answer you're looking for? Browse other questions tagged boeing-737 autopilot boeing vnav or ask your own question.

5
What is the procedure to climb and level off using a Bendix/King KAP140 autopilot?
8
Why does the FMC in B737 limit the climb speed to 230 knots on the VNAV mode until the leading edge devices are fully retracted?
2
How much does the horizontal stabilizer on a 737 move for one unit of trim?
0
Does the AP disengage if the plane is upset and how would the flight controls react if not being held?
2
How does the B737's 'throttle offline' setting work?