What is the impact of camber on CLmax?

I was reading Aerodynamics for Engineering Students by Houghton and saw the following graph: 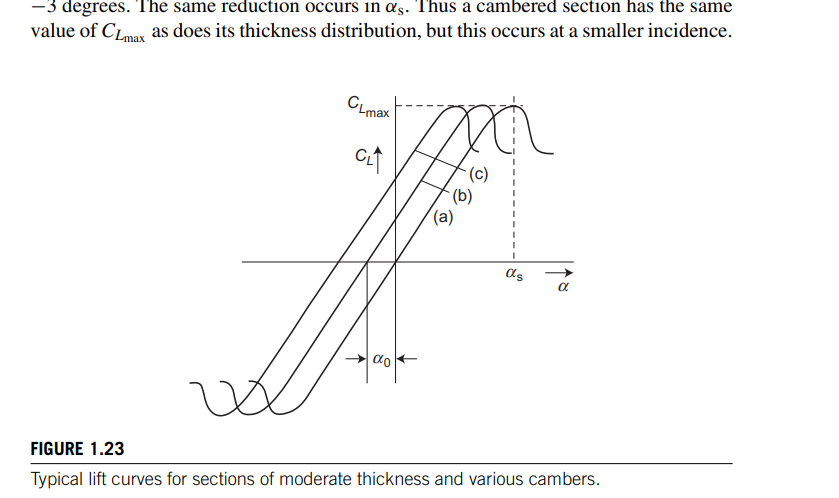 A lot of other sources say that increasing camber increases CLmax, like the graph below. 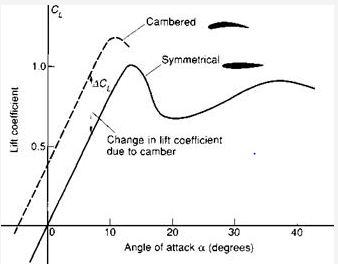 I am a little confused by what camber actually does to CLmax? An explanation which focuses on the physics would be very helpful!

Camber directly affects the amount of circulation an airfoil can generate, adding camber will always generate a higher zero alpha lift coefficient (intersection of the lift coefficient curve with the x=0 axis) up until a point that there is too much camber to sustain attachment.

This leads directly to the question asked - does camber increase CL_max? For any given AOA, there is an ideal suction side geometry that generates a pressure distribution that is always on the edge of separating. Liebeck defined this ideal shape but only for laminar flow, for which the boundary layer equations are closed form, this was all based on the work of Stratford who came up with the ideal pressure recovery. Having a surface that is about to seperate everywhere can even be true for a symmetrical section at some inclination, although it's not going to look like a NACA 0012/15 or anything familiar. The effect of the pressure surface on the amount of circulation generated, is much more insignificant than the suction surface, but it is not zero. Therefore, a cambered airfoil will make slightly more load at max CL than a symmetric section.

In reality, there is no magic button to increase, decrease camber. Airfoils are complex geometries that cannot be driven by one parameter without affecting everything else. Adding camber by 'bending' the airfoil somewhere near the front of the chord will give some more circulation, but also probably increase the departure angle, and create a risk of separation towards the trailing edge where the pressure recovery is too steep for the boundary layer to cope with.

Unfortunately there is no easy +camber = +max lift coefficient relationship, but for a cambered and non-cambered airfoil designed to operate on that separation limit, the cambered airfoil will generate slightly higher max lift.

In general, boundary layer development is key to understanding the role of airfoil geometry on performance metrics such as CLmax. In this case, with increasing AoA, positive camber creates a reduced adverse pressure gradient near the leading edge thus delaying the onset of massive boundary layer separation at stall angles relative to a symmetric airfoil. So, with positive camber, CLmax could be higher since massive flow separation occurs at a higher AoA.

Of course, you could use camber to reduce CLmax relative to symmetric airfoils.

Camber is measured by taking the midpoint between the top and bottom of the wing and comparing it to the chord line, which runs from the leading edge to the trailing edge.

The top graph simply shows that bending the leading edge down, as slats do, will begin to generate lift even if the wing is at zero AOA, because the top of the wing now has a greater curvature than the bottom. Notice a symmetrical wing (no camber) at zero AOA will have its upper and lower "lift" cancel out, and must be at a positive AOA to generate lift.

The undercambered wing in the second graph will produce a greater Coefficient of Lift because of it's ability to "trap" more air underneath the wing and force it downwards.

But one should be aware of the drag penalties of this type of wing, requiring much more thrust generate the same amount of lift as the symmetrical airfoil moving faster. This is why cambering (with slats and flaps) is generally not utilized in cruise.

Not the answer you're looking for? Browse other questions tagged aerodynamics wing aircraft-physics airfoil stall or ask your own question.

4
Is the Reynold's number a function of the fluid flow stream or the obstruction?
8
Does an accelerating airplane also start climbing?
2
What are the effects of camber location in an airfoil?
10
How does turn radius change with velocity between Vm and Vs, as in a 180 degree turn in a canyon?
9
Why is ground effect greater over smooth hard surfaces?
1
Why does the stall angle decrease as camber increases?
3
How does downwash affect angle of attack?
3
How does gross weight affect helicopter autorotation?