What determines the maximum ground speed of hot air balloons?

Balloons travel with the wind, so all their motion over ground comes from air movements.

do hot air balloons have the ability to control their ground speed? If so, how?

This was a burning question in the nineteenth century and many attempts were made to influence ground speed, apart from rising into higher altitudes and testing whether the wind direction there is different. Naive people added sails but had to notice that those remained limp and only added weight. Others added paddles or engines (steam, electric and gasoline engines were tried) but success was limited before Zeppelins started to make directed lighter-than-air travel routine.

An interesting variety was tried by the Swedish balloonist Salomon August Andrée who added three long ropes to his balloon, their ends dragging on the ground. This caused drag which slowed the balloon, thus giving it some speed difference versus the wind. Now, with some relative wind, sails could indeed generate a force which could move the balloon sideways. However, when tried in 1897, two of the ropes were lost during launch and the remaining one proved ineffective. 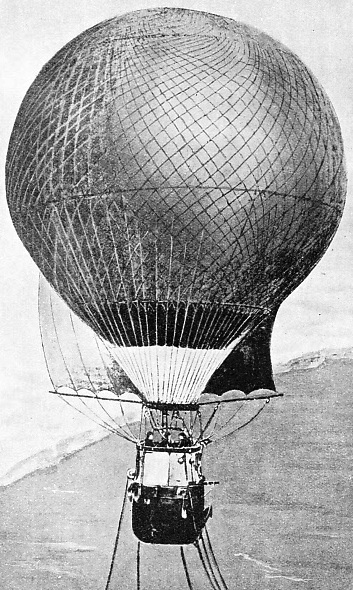 Is there a maximum limit to the ground speed of a hot air balloon?

No, if the balloon rises into the jet stream, it can travel at several hundred miles per hour. There is no speed limit once the balloon is up in the air.

What factors contribute to this speed limit?

This is not about ground speed limits, but wind speed limits: While there is no fixed limit, higher winds will prevent the envelope to stretch out completely and rise up when being prepared for launch. Instead, the windward side will remain dented. During landing, the gondola will be dragged along on the ground when wind is too high. Both these factors let balloonists prefer calmer wind for take-off and landing. Once the balloon is up in the air, no such limit exists any more.

Therefore: The ground speed of the balloon is always that of the wind.

An ordinary hot-air balloon drifts with the wind and so its ground speed is always that of the wind.

Some control over flight direction is possible by knowing or guessing the wind direction at different altitudes and climbing or descending to a level where the wind is favourable.

A hot-air "dirigible balloon" or airship has an engine and propeller. But they have been few and far between, I don't know if any are still flying.

26
How do hot air balloons navigate?
2
Why can't you have sail-powered airplanes?
3
How useful were the wings and tail of Jean-Pierre Blanchard's balloon?