What are the differences between Bearing vs Course vs Direction vs Heading vs Track?

This answer from English.SE does not focus on aviation, and does not explain 'Track'.

In basic, simple English, would you please compare and contrast all 5 terms in my question's title? The differences between 'course' vs 'heading' was generously explained in this answer.

This is how I explain it!

Heading:
This is where my nose points - and seeing as my nose is attached to my head, this is where my head (and thus my machine) is pointing relative to north.

Course:
This is my intended path of travel that I have calculated taking into consideration winds, variation and declination.

Track:
This is my actual path traveled over ground - just like a set of tracks I would leave behind in the snow or sand, relative to north

Bearing:
This is the angle between the location of an object, machine or destination and either: 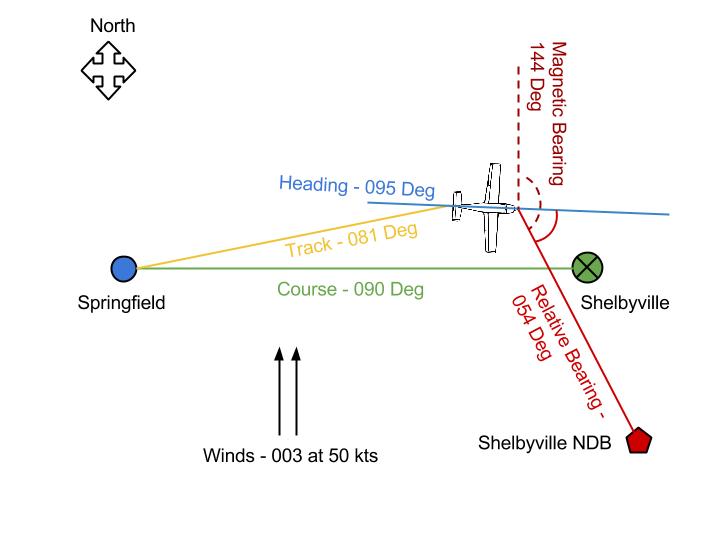 So from the picture, if I take off from Springfield enroute to Shelbyville, my course (the intended path) is due east, or 090 degrees. I notice my winds are southerly (from 183 degrees / to 003 degrees), so I make my heading 095 degrees to compensate for wind drift (or 5 degrees crab into the wind).

If my calculations are bang on, my track should be the same as my course, however I misjudged the winds, finding out my resulting track over the ground is 081 degrees, so I must correct (by increasing) my heading to get back on course.

Now with some airports, the navaids (NDB or VOR) are not directly at the airfield but some distance away, so if I wanted to either fly directly to the NDB or figure out my position in space during enroute nav checks, I would take the bearing to the NDB/VOR either relative to my heading or relative to magnetic north to find its position.

I will try to explain as simple as possible, though I'm not a professional.

Heading
It is the value the compass shows you while you fly your plane, relative to Earth's magnetic field. But your heading is not where exactly your plane goes. Why? because in most of the cases (if not all) there is wind.

Track
This is the aircraft's actual "path" over the ground when wind effect is "added up" to the aircraft's velocity. You need track for navigation since this is where you actually go.

Bearing
If it is from north (true or magnetic): Having two locations A and B, bearing of B to A is the angle measured clockwise from north to B having as angle vertex location A.

If it is relative: Having 2 locations A and B, bearing of B to A is the angle measured clockwise from point A forward direction to B having as angle vertex location A.

In the following picture, red is true bearing, blue is relative bearing. 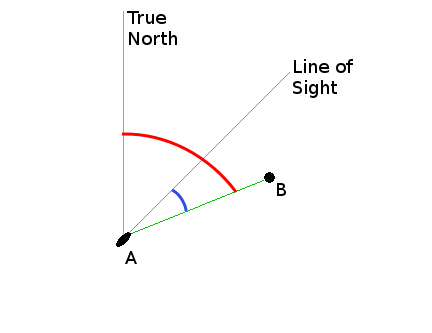 Course
This is the one and only path you can follow to reach one specific point. Suppose that you are instructed to "approach the XYZ point from the east" that means course 270 to the XYZ point. The following pictures depicts the concept: 270 course to XYZ is the green one. The red one goes to XYZ but it is not 270, the orange is 270 but doesn't end to XYZ. 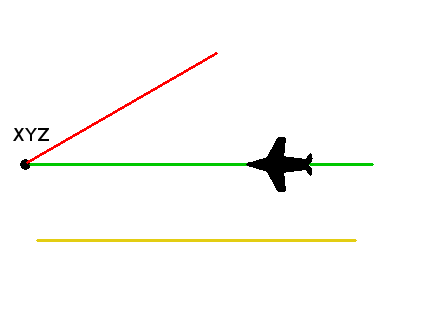 The difference between track and heading not only includes wind, but also includes flight in sideslip due to asymmetric drag (eg engine out) or pilot induced steady heading sideslip. It also includes AoA during a turn; extreme case of 90degrees AoB at high AoA.

2
Flightradar24.com track info
0
Why are heading in PFD and map off by exactly 10 degrees?
1
Navigation theory for Private pilot
0
What's the difference between Magnetic Course and Magnetic Heading?
2
What is the meaning of “American 755, turn right, heading 320"?
13
What is the difference between azimuth and heading?
4
Why separate autopilot controls for course and heading?
6
What trajectory do I fly if bearing angle is constant?
5
Is this "bearing" sentence utterly incorrect?
3
How heading bug is calculated during cross wind and tail wind?
See more linked questions