Mechanical and hydro-mechanical flight control systems (cables, pushrods, hydraulics) all offer pilots some form of feedback – direct or, in the case of hydraulics, artificial – as the aircraft maneuvers and forces are applied to the controls. I know that early FBW, like that in the F-16 prototypes, used a rigid system that often allowed pilots to over-control the aircraft.

Do fly-by-wire-equipped airliners, like their non-FBW siblings, use an artificial feel system to provide control feedback?

After some digging, I found an answer for myself: yes, some FBW airliners use artificial feel systems, but not all of them. According to Electronics in the Evolution of Flight (Google Books),

The [Boeing] 777 fly-by-wire system employs envelope protection. This feature of the artificial-feel system provides increasingly greater force when the aircraft is pushed to its limits.

Conversely, Airbus does not provide any feedback to the pilots as their flight control system enforces control laws that cannot be overridden by inputs (source: Aerospatiale engineering document):

The positioning of the control surfaces is no longer a simple reflection of the pilot’s control inputs and conversely, the natural aerodynamic characteristics of the aircraft are not fed back directly to the pilot.

Getting regulatory, since I did some further research: 14 CFR 29.395, certification of Transport Category aircraft, only states that the controls are required to resist a certain amount of force (i.e., not break). This differs from how much force is required to "achieve the positive limit maneuvering load factor" or otherwise impart changes to the aircraft's orientation (14 CFR 23.155 / 23.157).

Yes FBW aircraft use an artificial feel system to provide control feedback. Artificial, as in: there is no feedback to the stick from the airflow forces on the control surfaces, and the stick would feel very light if not loaded by some sort of mechanical feel spring. The mechanical feel spring makes the feel artificial; the spring can have a constant stiffness, or a varying stiffness as function of airspeed (q-feel).

All FBW must have artificial force feel because there is no direct mechanical connection between the control surface and the stick. Also all irreversible flight controls must have artificial force feel: although there is a mechanical link between stick and surface, aerodynamic moments on the control surfaces are not fed back through the hydraulic actuators that move the surface. The extent of the feedback feel depends on the manufacturer:

Note that both aircraft function the same in that they both use control deflections for inputs for the flight computers, which compute the desired surface deflection. Only the stick coupling and the feedback forces differ. From the B777 FCOM: 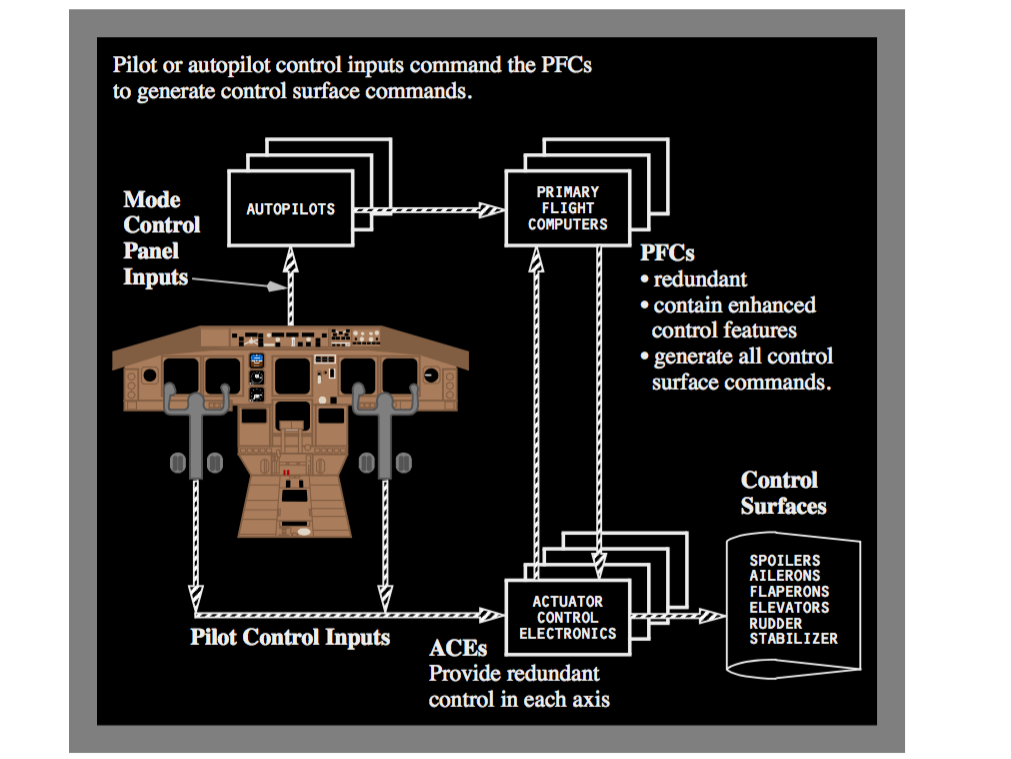 The second bullet point describes a simple spring characteristic. The first bullet point means that the spring stiffness varies with airspeed, like when the elevator would be reversible and the aeroforces could be felt directly at the stick. The A320 does not have a variable spring gradient and spring forces are always the same, regardless of flight state. It is still an artificial feel though: all irreversible flight controls have artificial feel, not all of them have artificial q-feel.

To answers this question I need to remember my favourite subject, Principles of Flight - just kidding. The key to the aswer is the requirement that civil (sorry, I don't know about military, but you're also not asking) aircraft are required to have a certain amount of stick force per G. What does this mean? In simple words:the aircraft is required to require the pilot to put more force on the controls if he wants to achive a higher load factor. Even simpler: we are supposed to work hard to have fun ;)

Now we need to know what fly by wire is. FBW means that the imputs from the pilots are brought to the control surfaces, or better the actuators digital. So there is no mechanical connection between the surfaces, where the aerodynamic forces act and the controls the pilot feels. That means that there are also no stick forces per G. That would also make a pilots life very hard. I can not imagine to fly a plane without feeling it / getting a feedback on the controls.

Taking into account both facts I've listed above my answer is yes, an airliner which is fly by wire equipped needs also to be equipped with an artificial feel system.

6
Are NATO fly-by-wire fighters designed to feel like F-14 Tomcats?