What is airflow direction in turn?

Let imagine that we put wind indicator on rotating merry-go-around. Will wind indicator stay prepedicular to the radius of circle,showing tangetinal airflow velocity?

(Wind indicator has equal mass and distance from pivot point so moment about pivot point is zero.It desing like this to stop centrifugal force to move one end out of turn..)

I think wind indicator will be prependicular to radius of rotation.. (I ask this because of glider yaw string...) 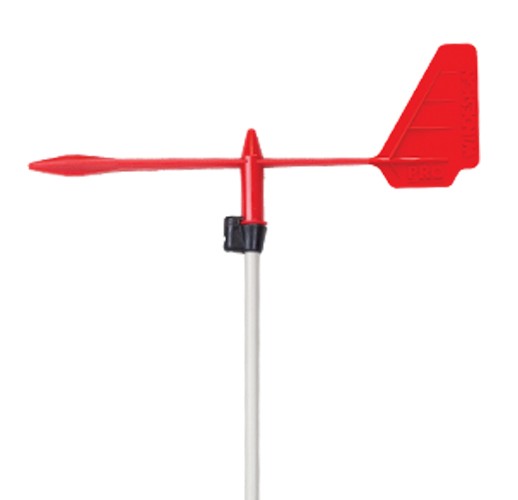 If there is no moment around the pivot point, then you do not have a wind indicator at all. One prominent writer here spoke of "curved airflow" in a turn, and this is a good example of it.

In order to be a "wind indicator" one must have greater Area aft of the pivot point. Because it is fixed, mass distribution is not a factor in indication of airflow direction, but may affect rapidity of response to changing relative wind.

It really depends how large a circle you are working with. For an aircraft with a turn radius of 1000 meters, the "weather vane" works fine.

But now comes an interesting twist. Because the weathervane is accelerating in a circular motion, center of mass must be at the pivot point, or error with be introduced to the direction of "point". Interestingly, for a known radius and rpm, placing the CG slightly behind of the pivot point will make the arrow point tangent to the circle!

Circular physics can be a bit different.

Let imagine that we put wind indicator on rotating merry-go-around. Will wind indicator stay perpendicular to the radius of circle,showing tangential airflow velocity?

A very lightweight piece of yarn would do essentially the same thing, though there would be a very slight tendency for the apparent "centrifugal force" to displace the free end of the yarn toward the outside of the circle.

Your intuition is correct that this is why tend to see some sideslip in circling flight, especially in slow-flying aircraft whose linear dimensions are not trivial compared to the radius of turn. The vertical fin tends to streamline itself to the relative wind, which means that the fuselage tends to be parallel to a line drawn tangent to the circular flight path at a point well aft of the CG.

This effect is illustrated in section 8.10 of the "See How It Flies" website.

In short, in turning flight, the "relative wind" is curved, rather than linear. It curves to follow the curvature of the flight path.

If the vertical surface at the nose and at the tail of the wind indicator (usually called a weather vane) are both flat plates, have the same surface area and are equi-distant from the pivot point then the wind indicator will remain perpendicular to the radius because the force generated by the nose and tail will be equal. If, however, it is designed like a normal weather vane and has a larger surface area at the tail then the nose will point slightly away from the merry-go-round, in your diagram above it would rotate slightly clockwise.

1
Can a wind tunnel simulate airflow when a vehicle goes around a curve?
0
In large transport aircraft, is the amount of elevator travel that is physically possible ever a limiting factor in turning performance?

3
What is the formula for the bank angle required for a turn in line-abreast formation?
0
Are there any helicopters with tail rotors where slip-skid ball may be centered even when fuselage is streamlined to the airflow in cruising flight?
4
What exactly happens when power is reduced in trimmed, straight and level flight?
2
What are the forces present in a coordinated turn?
1
What does “pitch plus power equals performance” really mean?
3
Why do airplanes start descending when we initiate a left turn?
5
What is the effect of thrust vectoring effect on the rate of turn?