I used to fly a Cessna 550 with 'steam gage' mechanical gyros. The Attitude Indicator always had its flight director solidly on the horizon in level flight -- to the extent a mechanical instrument could be seen accurately.

I recently started flying a Phenom 300 with a G1000 panel. It is curious to me that level flight in the Phenom is always about 2.0º nose up pitch: 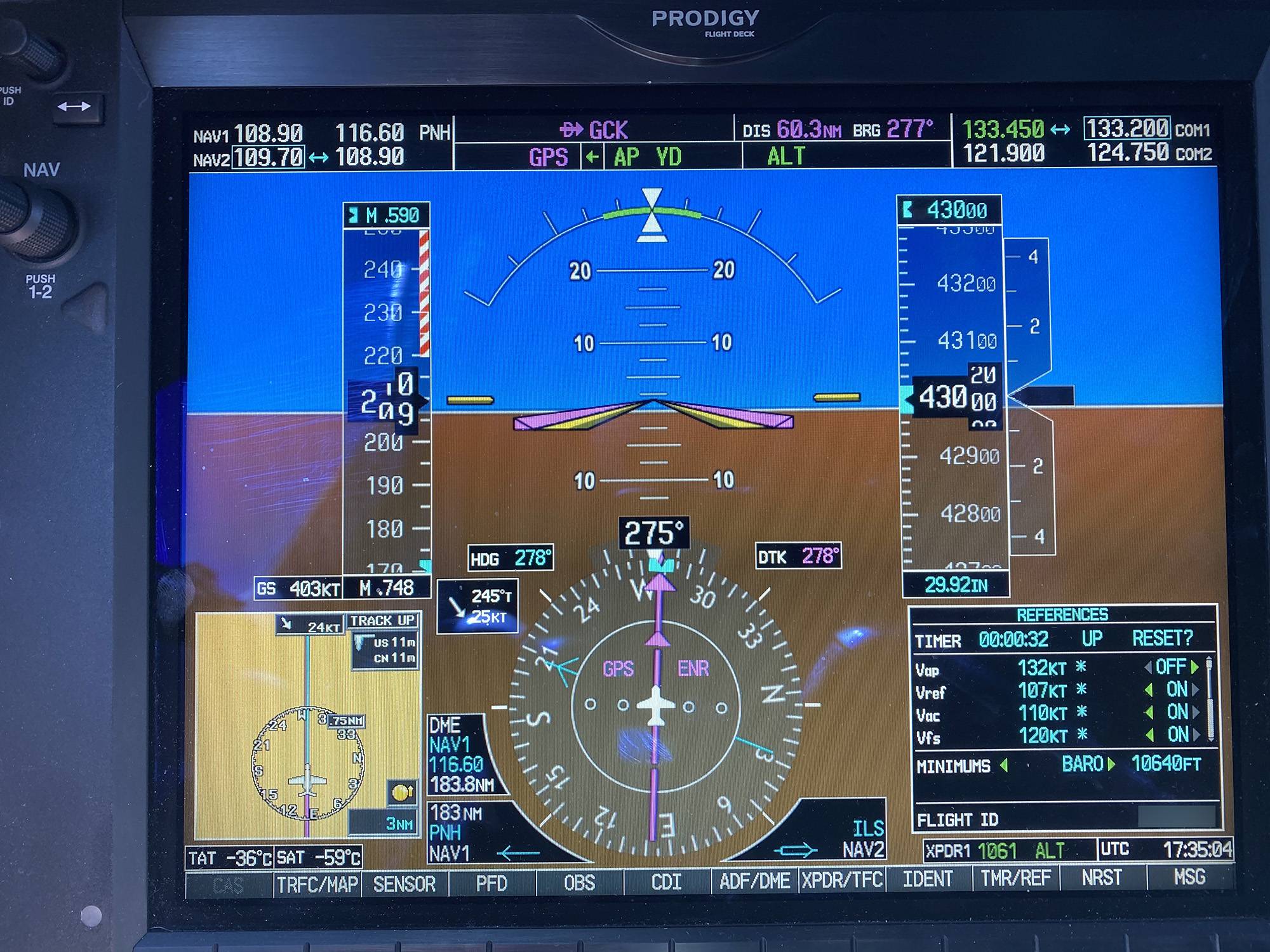 And a detailed pic of the command bars in level flight at FL430:

My question: Why would level flight be indicated by nose up pitch? What does 'level' actually refer to?

Level flight just means not climbing or descending. Where the nose is actually pointing is another matter.

The pitch you are seeing is the "deck angle". Pitch attitude is normally referenced to the longitudinal axis of the fuselage (and normally, the cabin floor or deck) relative to the horizon for the loading and speed you are at.

The deck angle will be the overall AOA of the wing for a given flight condition plus or minus the wing incidence relative to the fuselage. If the incidence is zero, meaning the wing mean chord line is parallel to the fuselage's long axis, and the wing is operating at a 2 degree overall AOA at that altitude and speed, there's your pitch attitude; +2. I would expect to see at least a deck angle of a couple degrees when flying at 210 kt indicated in a jet, unless the wing had an incidence of several degrees.

Say the Phenom has a wing incidence of about 1 degree, and that the wing is actually working at an overall AOA of 3 degrees at 210kt; the resulting deck angle would also be +2.

In the Citation with the mechanical spherical attitude indicator with Flight Director, you have to allow for the parallax error due to the gap between the indicator and sphere if your sight line is off a bit, and perhaps the Citation II has a higher wing incidence, and along with a lower wing loading cruises with a lower deck angle of 1 degree or less. With a mechanical indicator it'd probably look close enough to 0 degrees to make that conclusion.

I was always told that an analog AI should be set to the white horizon line while on level ground, rather than for straight and level flight. The reason for this is that it offers a truer picture of the pitch of the nose above the imaginary horizontal plane.

For example, a Cessna 172 in straight and level flight will actually be in an orientation with the nose about 2.5 degrees above horizontal. It’s entirely likely that the Phenom balances S&L with a slightly nose-up pitch as well. Unfortunately, the G1000 does not offer the ability to calibrate this for yourself according to preference.

Perhaps, take solace in the fact that you now have a somewhat more accurate reading of the actual pitch of the aircraft during its various maneuvers and configurations.

At FL430 cruise, your aircraft is probably exhibiting a real nose-up pitch attitude in order to achieve the wing's best-economy AoA at that point in the flight envelope and the electronic detectors in the pitch attitude indication system are showing you this.

Taking a vacuum-driven "steam gauge" gyro apart reveals a set of clever doodads called erector mechanisms inside it which are intended to determine the average direction of "up" on long-term (~tens of minutes) timescales. It is possible, then, that the steam gauge system was nulling out the persistent (but slight) steady-state nose-up pitch condition in high altitude cruise.

In level flight, it's natural to have some nose-up pitch. You need some angle of attack to produce lift that counteracts gravity. "Level" on the attitude indicator probably refers to 0 angle of attack, or how the plane sits when it's on the ground wheels down and the G1000 is being calibrated.

Not the answer you're looking for? Browse other questions tagged avionics flight-instruments g1000 or ask your own question.

7
What should the Attitude Indicator be reading when in straight and level flight?