What are different components of an engine pylon?

What are the different structural components that are inside the fairing of engine pylon and what are the functions of each part? The pylons for each aircraft are made of Ti-64 alloys, can they be made using Aluminium alloys or the temperature requirements are very high so Aluminium cannot be used? Thanks

Your question is very broad. Are you looking for something specific? There isn't really a single configuration where one can simply list standard function of each component, but I can give broad overview.

Firstly, pylon is also a conduit for multiple systems between aircraft and engine and thus contains secondary structure for mounting them. It looks much like aircraft wing with frames and ribs to support distributed loads. Secondary structure is easily made from aluminum and includes brackets, cleats, supports, stand-offs, and attachment hardware like clamps, nuts, bolts. Also pylon skins/fairings can (depending on design) be minor part of load distribution. But I presume you mean primary structure components that are most directly associated with mounting the engine.

The functions are to attach/support engine (including withstanding emergency/crash/FBO loads), transmit thrust to airframe, and accommodate engine thermal expansion. Most generically, this is achieved by structural members forming a torque box or space frame. But realization and component names vary a lot. The are two fundamental families depending on attachment: 1) fuselage (i.e.) side-mounted, and 2) wing (i.e. vertically)-mounted. We won't go into exotics like above-wing & wing-root mounting. Furthermore, there are few styles of wing-mounting (with different components) that fundamentally are driven by relative location of engine to the wing and relative size of engine to aircraft. There are also different mounting philosophies like soft-mounted (with elastomeric vibration isolators) or hard-mounted (without such).

Bear in mind that aircraft structures are designed to distribute load across multiple members and provide redundant load paths, so as to intentionally avoid single point of failure. Having said that, 4 key elements can be identified:

In a fuse-mounted configuration the principal plane is horizontal and functions are more decoupled. In wing-mounted configurations the principal plane is vertical and some functions & load distributions are more coupled. Other designs like B-747, where engine hangs far below wing attachment points, rely on a space fame of axial members to suspend the engine in a 3D truss (as can be seen in previous post with link to FAA accident investigation). The functions mentioned before are even more coupled & shared between all members. The names are really irrelevant as Boeing chooses to refer to them as upper/ lower links and side braces. 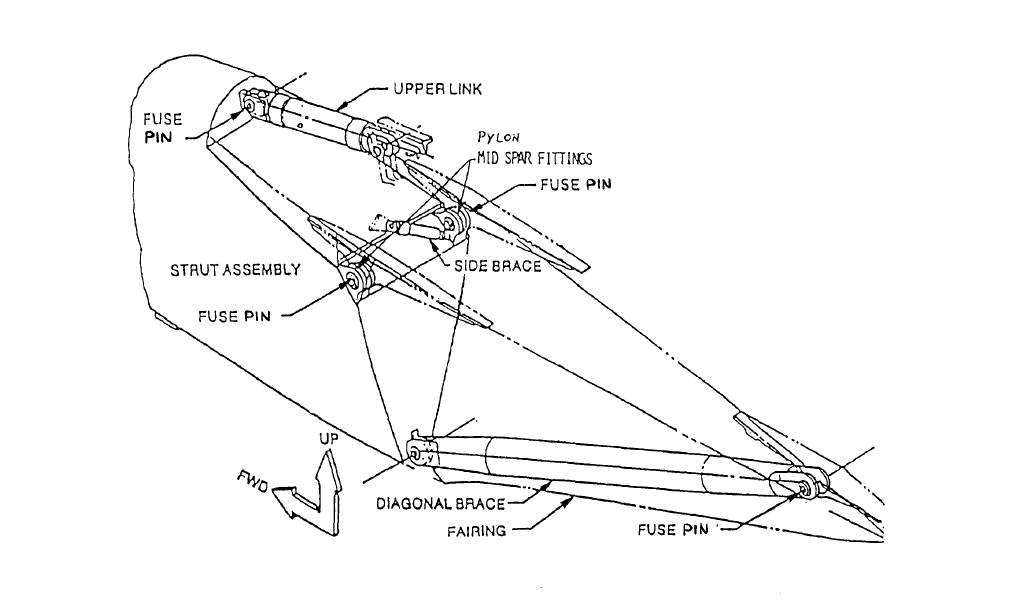 Materials: Actually aluminum is widely used in mounts, with steel as required, and titanium when $/kg weight trade studies justify it. Titanium is expensive & horrendously difficult to machine and is used sparingly, albeit more so on recent designs that push margins. Of course, as everything in such highly complex products, it depends on specifics and sizing of a given design. Temperature must be considered, but is typically not a driving factor, especially for fuselage- mounted engines, and areas adjacent to cold sections of the engine. Actually it works out quite well - the heaviest and most loaded section of engine (like fan)is in front, which is cold. The loads are best supported & reacted by a big, intricate mount with large x-section area & moment of inertia (like yoke). Manufacturing it from titanium would be cost prohibitive and it is best made from aluminum. The aft hot section of the engine is supported by simpler, smaller struts that could be made from titanium. For wing-mounted though, the whole pylon area is subject to heat soaking, but weight is more evenly distributed between forward and aft mounts, so having smaller, simpler titanium fittings is practical.

I see, so your question was really about element #4 - the space frame that continues to carry loads further into main structure like wing box. To my knowledge, there are really no definite distinguishable sub-elements with universal names. They may be called beams (at least the main ones that hang engine off on any cantilever-like member), stringers, braces, bulkheads/frames - typically depending on shape & orientation to aircraft axes. Moreover, depending on design's simplicity/complexity and ability to refine structure further, they can vary from few straight-forward main members to many dozens of links.

I think it's best to get functional idea of load distribution by referring to a patent here: 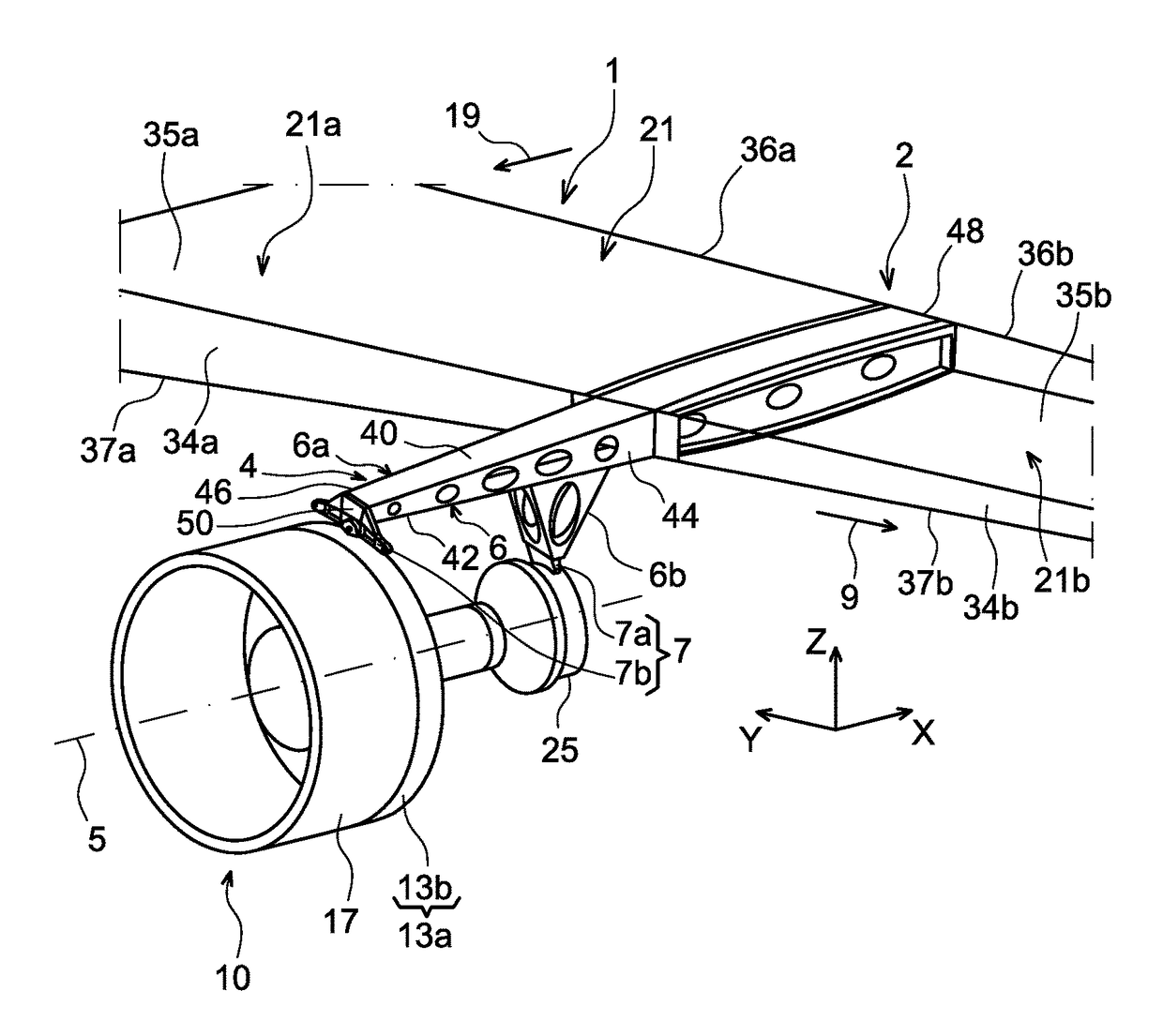 For example of real-life, analyzable design search examples on the web, like these pics from case study here 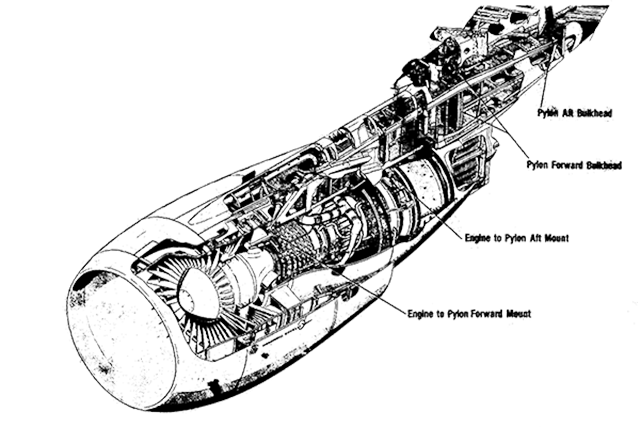 I am sure that once you realize the fundamental load picture, you will be able to identify those elements by function, regardless of particular name.

For such complex machines that require thousands of hours to design & cost millions of $, the answer is - absolutely YES, temperature constraints are considered. The question is - can we still get away with aluminum or are we forced to go to titanium. The answer depends on many factors & is calculated for particular aircraft. To summarize broadly - it depends on config, how hot the engine runs, and what is heat load imposed by systems. It helps to understand factors driving material selection and historic perspective. As everyone is chasing fuel efficiency, the engines are running hotter for increased thermal efficiency. At the same time the regs have gotten stricter on ignition prevention, forcing lower permitted bleed temperatures near fuel tanks. This requires using higher capacity intercoolers with greater heat rejection than ever before. And they are inevitably located in the pylon. Moreover, there is trend to More Electric Aircraft (MLA) with bigger generators, and power transmission generates a lot of heat as well.

So if you have smaller, cooler, less efficient engine, which typically goes with smaller planes with less consumption load and tail/side mounting - you might be able to get away with aluminum. However, with a bigger, hotter-running engines, with greater bleed/electrical consumption load of modern airliners, and with under-wing mounting, leaving the pylon exposed to rising heat - you pretty much can't escape using titanium.

Not the answer you're looking for? Browse other questions tagged aircraft-design jet-engine wing aircraft-structures or ask your own question.

17
Why are turbine blades not made out of titanium, only compressor blades?
29
Why do we use pylons to mount the engines on jetliners?
33
Why do we never see high-bypass turbofan engines sharing the same nacelle on large airliners and similar aircraft?
21
How are temperature differences handled in a jet engine?
29
Are the fastest moving pieces of a jet engine supersonic?
8
Can a jet engine benefit from nitrous oxide boost?
6
What are the issues involved in converting a quadjet into a twinjet?
1
Aerodynamic Pressure Loads in FEA of Lifting Surfaces - Query