I have a question of the book "The foundations of helicopter flight" by Simon Newman.

The question is from page 186: 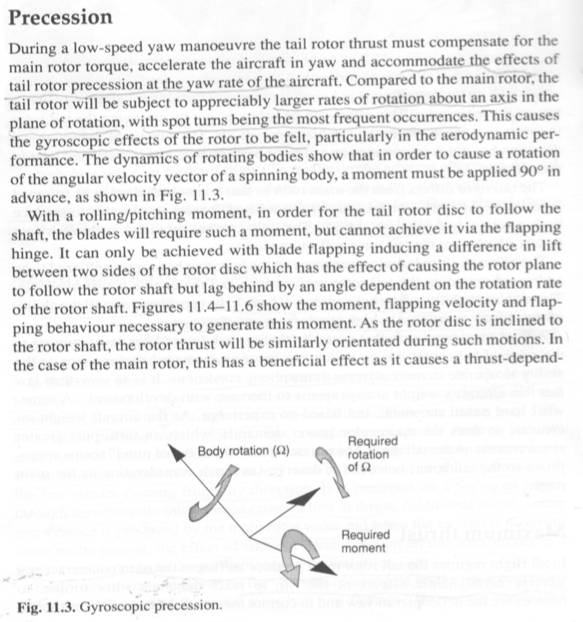 1) How can we feel gyroscopic effect of tail rotor with hover spot turns?

In helicopters, the controls are rigged is such a way that when forward cyclic is applied, the helicopter moves forward, likewise for aft, etc. To accomplish this, the pitch horn is offset 90º to the rotor blade. The controls still tilt the swash plate in the same direction as the control input is made, but due to the pitch horn placement, the input to the blade occurs 90º earlier in the plane of rotation. The tail rotor as a gyroscope is rather insignificant

In a stable, no-wind hover everything is in equilibrium. The engine is providing just enough power to keep the main rotor turning at just the right rpm to hold the height over the ground and to keep the tail rotor spinning at just the right angle to counteract the torque of the main rotor. When you push one or the other of the tail rotor pedals forward, you upset this balance and must do something to compensate in order to hold the same hover height.

In a hover, the torque of the main rotor tries to turn the fuselage to the right and therefore pressure on the left pedal is required to keep the nose straight. Forward left pedal means the tail rotor blades are biting the air at a greater angle of attack and therefore producing more lift. If you add even more forward left pedal to initiate a left hovering turn, you increase the tail rotor blade pitch angle even more. This requires more power from the main gearbox and, if engine power remains constant, the only way the gearbox can satisfy this increased demand for power from the tail rotor is to allow main rotor rpm to decrease.

The tail rotor provides horizontal thrust but only to the right (nose left). The tail rotor counters the torque on the fuselage caused by the engine driving the main rotor

Contrary to some misguided views, all helicopter rotors, both main and tail, are gyroscopic and precess at exactly 90 degrees to the sum of ALL applied moments. The control mechanisms of all helicopters are offset in phase to allow for that.

In the case of a tail rotor, when a hovering yaw is carried out, the tail rotor axis is being turned about a vertical axis and so it will precess about the roll axis of the helicopter.

This is accommodated using mechanical coupling in the tail rotor hub, typically by turning the axis of the teetering bearing by something like 45 degrees. When the tail rotor disc rolls, the coupling causes cyclic pitch changes on the tail rotor blades that oppose the roll. As a result the tail rotor follows the hull in a yaw instead of precessing and munching bits off the fin.

8
How does the a movement of the cyclic control stick in a helicopter affect the swashplate?

11
Why do hydraulic jack stalls result in pitch up and right roll?
24
How do modern helicopters tackle Vortex Ring State?
5
How do helicopters hover?
30
If a helicopter's tail rotor fails, is it possible to perform an emergency landing?
9
Should helicopters fly when they the lack power for vertical climb out of ground effect?
3
Will helicopter control inputs be reversed because of precession if the fuselage starts a rapid spin?
2
Could this helicopter's body be a flying wing?
9
Why is ground effect greater over smooth hard surfaces?
0
Are there any helicopters with tail rotors where slip-skid ball may be centered even when fuselage is streamlined to the airflow in cruising flight?
1
Can a helicopter be stable without moving the control inputs?