Does the stability of a mass change if the center of gravity is above or below the point of thrust? [duplicate]

Ask Question
Asked 14 days ago
Active 14 days ago
Viewed 61 times
0
$\begingroup$
This question already has answers here:
How does the line of thrust affect longitudinal stability? (3 answers)
Closed 13 days ago.

I was wondering if it makes any difference if the mass is balanced above or below the point of thrust. See image below for clarification: 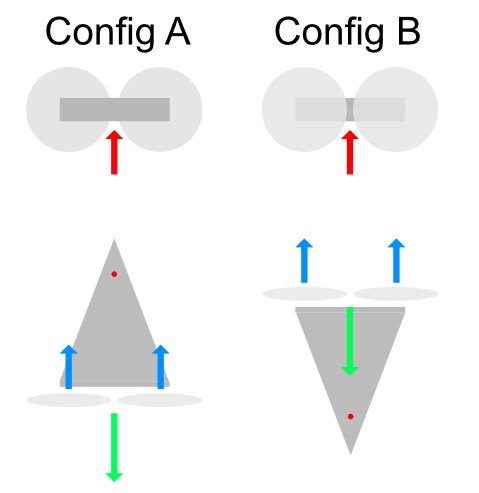 So does it makes any difference for the stability of the mass (center of gravity) is above or below the point of thrust?

I am have no engineering or physics background so please explain this as simple to me if possible :)

Let me know if this is not the right place to ask and maybe suggest me where to ask this then.

The most stable way to maintain a hover is center of mass below and center of drag above.

What confuses many people is how a "pendulum" reacts while being accelerated, and how it reacts when air drag stops acceleration.

Placing the center of drag above the CG is commonly seen on aircraft tails. This is one reason why "classic" aircraft tails are "upright". Wing dihedral serves the same purpose, to roll a side slipping plane back to level.

Once hover stability is achieved, one may reduce drag above or add drag below to reduce stability enough to allow controlled movement.

Leaving the Center of Gravity underneath will increase stability where when the object is not accelerating. But "pendulum stability" is more properly called "pendulum and drag stability", as in a parachute.

So, in your case, keep the triangle above with light materials., but have your weight below the rotors, and just use the rotors to lift and propel the aircraft. But if you want a separate (red arrow) source of propulsion, try to put the center of horizontal drag and CG in the same spot, and push there.

Not the answer you're looking for? Browse other questions tagged aerodynamics flight-controls aircraft-physics stability or ask your own question.

6
How does the line of thrust affect longitudinal stability?
25
Would a helicopter with the blades on the bottom fly the same, if at all?

7
What is the physical explanation for the formation and position of stagnation points on an object moving in a fluid?
3
What is the relation between airspeed and generated heat at constant drag?
0
What is the difference between a forward, aft, high and low center of gravity?
12
Is A380's center of gravity really too far back?
1
What is the link OR difference between change in momentum & pressure difference?
7
Are there any fly-by-wire airliners with negative or near-neutral pitch stability?
3
What factors are included in the moment coefficient of a wing?
1
How much force is produced by control surfaces?
0
Are there any helicopters with tail rotors where slip-skid ball may be centered even when fuselage is streamlined to the airflow in cruising flight?