Will it be more efficient if airplanes flap like birds? [duplicate]

Many airplanes have parts that are designed to mimic some features of animals. I have also read that birds are incredibly more efficient than most of the airplanes we see today. I wonder, will the future passenger airplanes resemble a big flapping bird? Considering that in the future we might have a lighter and more durable materials for wings.

Probably not. A flapping wing is only producing thrust during half its operating cycle (except hummingbirds and insects, who's wings generate thrust in both directions when hovering) so there is energy wasted in the wing's recovery cycle in normal forward flight. It might be better for the bird to keep its wings "fixed" and use another oscillating surface to provide the thrust, like a fish tail, but nature has apparently decided this is not a viable engineering solution for making horizontal thrust in air and in balance, it's better to oscillate the lifting surface.

Efficiency aside, the big show stopper is that a mechanical flapping wing machine, to the extent it can be perfected, will always suffer from the the problem of the body moving vertically in an inertial response to the wings being driven up and down. You would not want to ride is such a machine vary long.

The main difference between the natural world and the man-made one is the man-made one's ability to assemble separate parts and make them operate together to convert energy potential to force without touching (either elements separated by an oil film, or a rolling interface) to produce power in various forms (crankshafts, connecting rods, pistons, turbine rotors, etc). Living beings must produce their thrust from elements that are physically interconnected in a single organism grown from a single egg. This is a huge engineering limitation for mother nature and is why nature couldn't invent the wheel.

So I would say, as an engineering exercise, ornithopters are actually sub-optimal, and nature and evolution produces ornithopters because that's the only design solution available when the "design toolbox" so to speak is limited to what can be done with a single interconnected organism, and to the extent that a man made version can be replicated, nobody would want to spend more than 2 minutes in the thing anyway.

It is amazing how ingrained into the psyche of many aviation enthusiasts, even today, is the issue of lifting the plane "as birds" when the issue of propulsion against drag is predominant as speed increases.

So, reduction in drag becomes the key issue. Indeed, a flapping wing is perfect for a relatively slow, lightly wing loaded bird as it "moves a lot of air a little at a time" much more efficiently than a duck holding its wings straight out and paddling franticly with its webbed feet (which would work fine in higher density water). But a bird can flap its wings due to much lower wing loading, which allows to lift and thrust with the same device, and lower airspeed, which allows for a much lighter structure from relatively lower aerodynamic stresses. Early biplanes with very large propellers took a similar approach until...

Increasing speed placed emphasis on the need for increased thrust. The higher wing loading of larger aircraft require higher speed to fly. So, at the expense of efficiency and weight savings, aircraft trend towards greater but less efficient thrust, partially offset by the ability to fly higher, giving a higher True Air Speed.

But recently, with the incorporation of high by-pass fans (and higher fuel prices), designers are returning to the old wisdom that birds employ so well.

In short, the answer is No. For many centuries, many proto-aeronautical engineers believed that the secret to manned flight would be found in complex flying machines that mimicked the flapping techniques of birds. These ornithopter designs were doomed from the start. 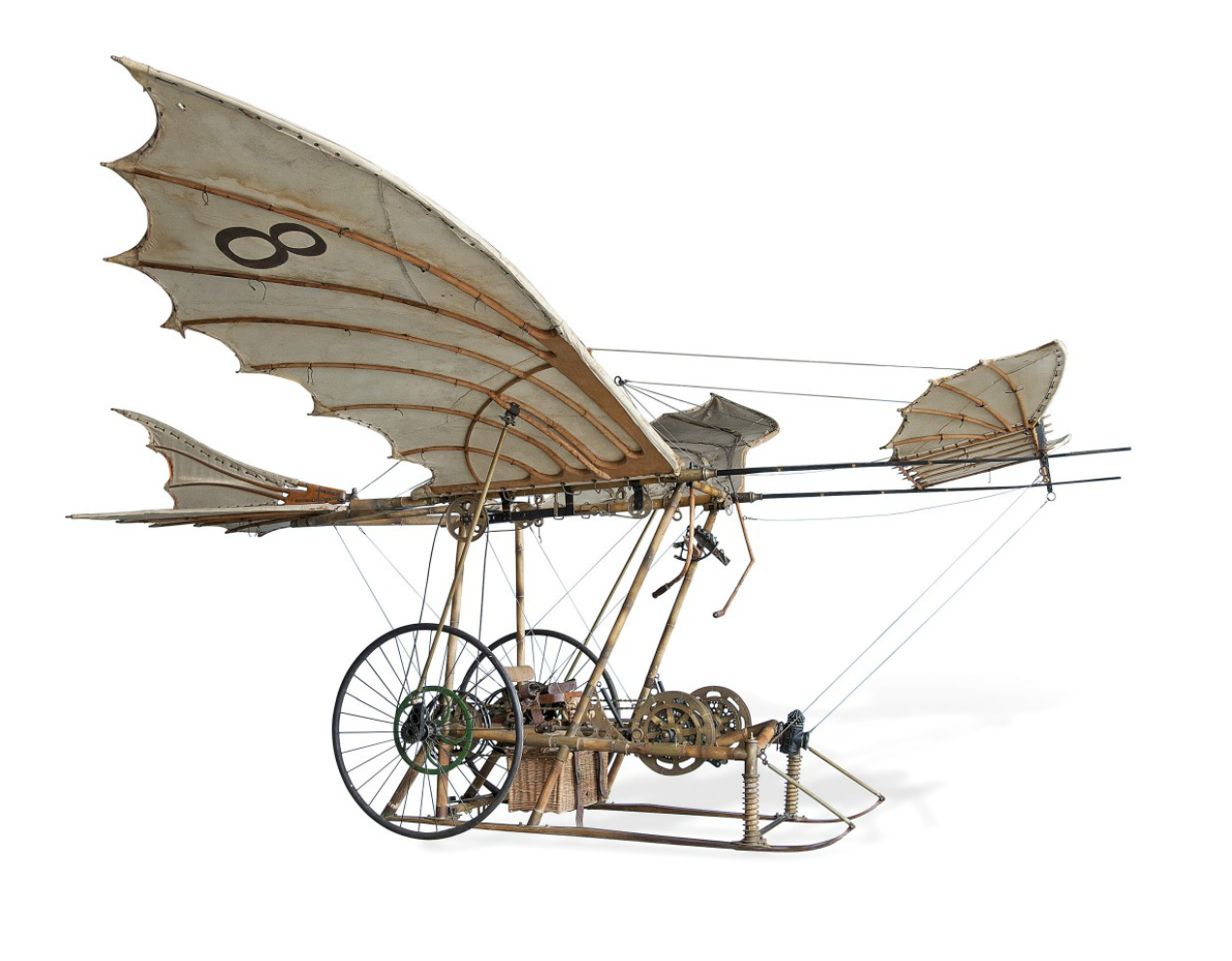 Aside from the obvious issues involving strong, rigid, durable, and light materials, there are tremendously complex psycho-muscular factors involved in biological flight mechanics that are impossible to duplicate with machinery. A bird has the benefit of nerve endings all over its body which provide immediate and intimate feedback of every minute shift and change. Additionally, the bird has fine motor control over its flight surfaces to a much greater degree than any aircraft can realistically replicate, and all at the speed of thought.

The good news is, efficiency can be relative. While the deft flight of a bird can be graceful, beautiful, and evolutionarily effective for its avian lifestyle, it will certainly never accomplish a trans-Pacific trip at 500 knots. Mankind has learned a lot from watching our feathered neighbors, but ultimately, our journey among the clouds lies along a different path from theirs.

That said, some small drone applications show promising possibilities for mimicking insect wings, so mother nature may still have a few more tricks to teach us.

Likely no but let's see

The relevant research study can be found here. In this study, it was shown that for some insects, the induced power can be twice the ideal value in hover, and can be even higher than this in forward flight. This is worse than possible with the fixed wing.

Also, propeller powered insects do not exist so it is not clear how the control experiment is done. If versus aircraft, the size difference may matter. A 3 mm propeller or jet engine for a mosquito insect may not be a more efficient solution.

Not the answer you're looking for? Browse other questions tagged aircraft-design aerodynamics aircraft-performance wing airplane or ask your own question.

67
Are we at peak speed efficiency for jet airliners at Mach 0.85?
6
Can planes flap their wings like birds?
5
Does a 1lb crow expend only 7.68 Watts to fly at 37 km/h?
5
Is 1 propeller always more efficient than 2?
1
When Airplane is reducing altitude from flight level (cruise), which one is more efficient
1
Are canards actually more efficient?