Based on this fuel flow chart, why isn't it more optimum to remain at an intermediate altitude rather than climbing? 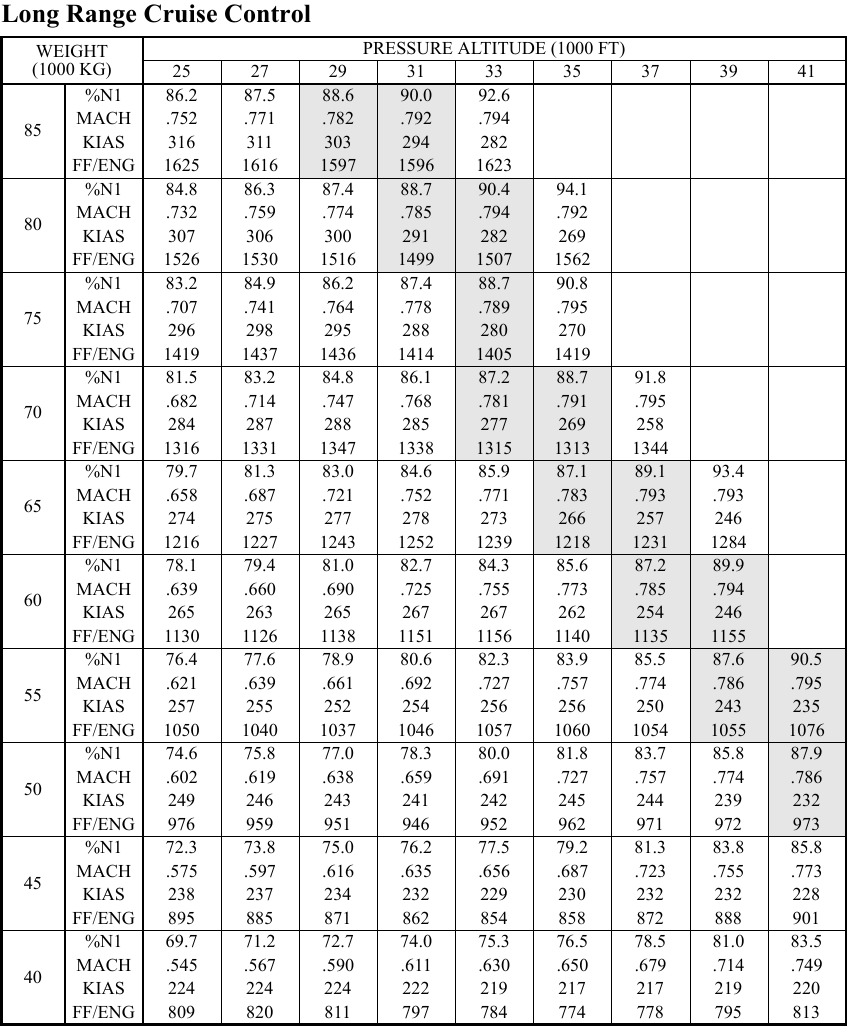 When airplane mass, altitude, N1 (engine spool speed) and Mach number change together, it is very hard to come to a meaningful conclusion what is better for fuel flow. However, you see that the grey boxes tend to show the smallest fuel flow and they sit at the upper altitudes, so altitude seems to help. Going above 90% N1, however, seems to increase fuel flow again.

With increasing altitude, the flight Mach number needs to be increased to keep indicated airspeed constant. I expect that the chart lists trim points at or near the optimum polar point for cruise, at least that is what the almost constant indicated airspeed for each mass suggests. With increasing Mach, drag goes up but so does the distance covered per time, so there is again an optimum where the transsonic drag increase is still tolerable and outweighed by the higher speed over ground.

71
Why do jet engines get better fuel efficiency at high altitudes?
53
Why are many jet aircraft designed to cruise around FL350-370?
24
In what way are the Concorde's engines considered efficient?
2
Why does transonic drag happen?
0
Does thrust output in jet airplane remains constant when altitude increases?
1
How long is a climb leg in a step-climb cruise flight segment allowed to take, according to regulations (FAA/EASA)?

8
Is there anything wrong with this more symmetric aircraft design, and why isn't it used?
4
Why does the Zapata Flyboard Air UL consume so much more fuel/hr than the Mosquito Air?
17
How do planes maintain constant speeds at cruise altitudes?
18
Why would a B-29 consume more fuel at 17 kft than at 9 kft?
17
Can the plane Celera 500L be eight times more fuel efficient than a jet of similar size and capacity?
6
How to most likely get a flight that will go above 40,000 ft?
4
Why do B787 Dreamliners more often fly at 42,975 ft rather than at 43,000, according to flightradar24?