Why doesn't a wing in supersonic flow produce a shock that results in flow parallel to the leading edge?

When we look at a wedge in supersonic flow, a shock emanates from the leading edge such that the flow after the shock is turned and is parallel to the airfoil surface. 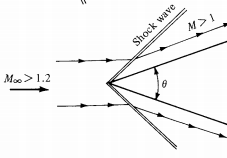 The shock angle is based on the flow turning angle (wedge angle) and can be found using the chart below: 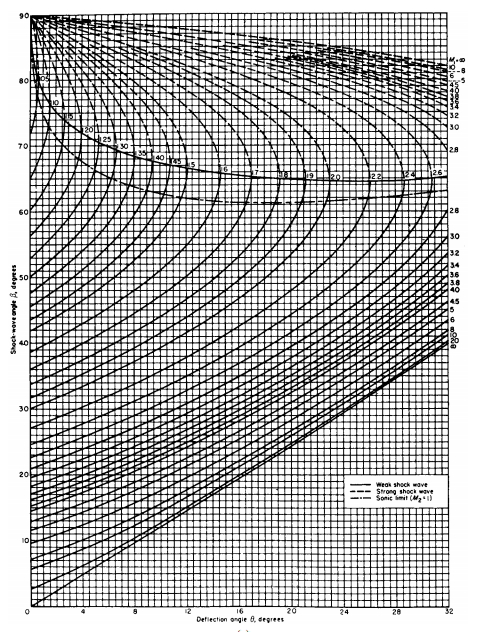 I was wondering why a wing in supersonic flow would not have the same behavior (see image below). That is, why wouldn't there be a shock emanating from the apex of the wing (which depends on the sweep angle much like the wedge angle ($ \theta $)? If this were to occur, there would be no component of the flow perpendicular to the wing (as the shock would turn the flow parallel to the surface). I know this doesn't occur physically because there is always a component of flow perpendicular to the wing, but this confused me because the wing seems exactly like a wedge (if we look at a wedge from the top instead of the side). 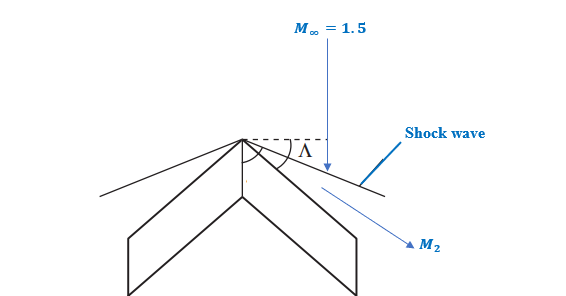 The two-dimensional flows, in section and plan, are just approximations or simplifications which apply under certain conditions. This situation can be easier to understand as a three-dimensional flow, and perhaps also from the reference frame of the air. When the wing approaches, the resulting pressure gradients make the air move out its way. Because the wing is relatively thin, the vertical gradient is much stronger than the horizontal one. So the air tends to move that way.

However some sideways flow does occur. Provided the shock cone remains in front of the wing, air has time to move sideways as well as up. Due to the sweep of the wing, there is a difference in pressures on either side of any given point. These make the air start to flow out from under the leading edge, curl up round it further out, get drawn back in again and then part way back over the wing get pushed out again. This sideways flow pattern tends to affect the pressure differences in turn and hence the performance of the wing. On a very sharply-swept delta it can even dominate the airflow. However for a more conventional swept wing, devices such as wing fences, leading-edge slots and dog-teeth are sometimes incorporated to reduce it.

Air needs to make way for the approaching airplane. For that, it takes the route of least resistance, which is above and below the wing. This is shown in your first picture which is valid for a supersonic leading edge. Your top view shows a different cross section through a three-dimensional shock at a much lower speed. The vector M$_2$ is wrong and does not correspond to what is really happening.

8
What is compressibility drag?
1
How does wing shape impact shock structure?

10
Why should isobars be aligned with the leading edge of the main wing for a transonic cruiser?
12
What is the aerodynamic benefit of trailing edge sweep?
12
Can a supersonic plane use a subsonic wing if the nosecone shock produces subsonic airflow around the wing?
1
What is primary cause of shock induced separation (shock stall)?
3
Why do swept wings decrease the drag increase that occurs in transonic flows?
1
How does wing shape impact shock structure?
2
Swept back wing theory
3
Why is sweep angle measured at the 25% chord?
1
Does the quarter-chord-angle rule still hold for wings with very long chords or large differences between leading- and trailing-edge sweep angles?