Can UHMWP be used as composites for aircraft impact susceptible areas?

I did some research but could only see UHMWP being used as a hybrid with graphite/ carbon.

I have two questions is it possible to make composites purely of UHMWP and epoxy? And, why use UHMWP with carbon, as it already has good characteristics alone?

Short answer: Yes, when used properly. It does have its limits (low melting point, low adhesion with epoxy), but if you design around those limits it helps to raise energy absorption considerably.

Long answer: I've used Spectra for improving the crashworthiness of glider cockpits in a study. That was back in 1987-88 when that stuff was brand new.

I molded models of forward fuselages in glassfiber-epoxy as a baseline and then added more models using graphite, aramide and Spectra woven fibers. UHMWP is great in tension but poor in compression, so using it all by itself for the fuselage cannot be recommended. I used 100% Spectra layups only for the seat pan of the models but covered it on both sides with glassfiber or graphite fiber for improved compression and shear strength when using it for the fuselage shell.

Next, I set up a dynamic and a static test. The dynamic test used a swing to let the models crash into an angled, greased steel plate while the static test used a hydraulic testing machine which slowly lowered a steel plate on those poor, unsuspecting models until they were completely crushed. Using a video camera and strain gages, I could prove that the quasi-static test delivered equivalent results to the dynamic test (since the speed of sound in the material is much higher than the impact speed), so the much easier to measure static test could be used for the majority of the tests.

Left: Quasi-static test in progress, right: Model mounted on the swing. Own work.

While the glassfiber and carbon baselines produced a strong force spike at the beginning of the impact and then developed cracks which greatly reduced the stiffness and impact energy absorption, the Spectra samples would not crack in the same way: The UHMWP fibers prevented those cracks. Instead, the epoxy matrix crumbled over large areas and the cover layer delaminated, producing a nice, continuously high force over the duration of the impact. I could improve energy absorption by 200%. 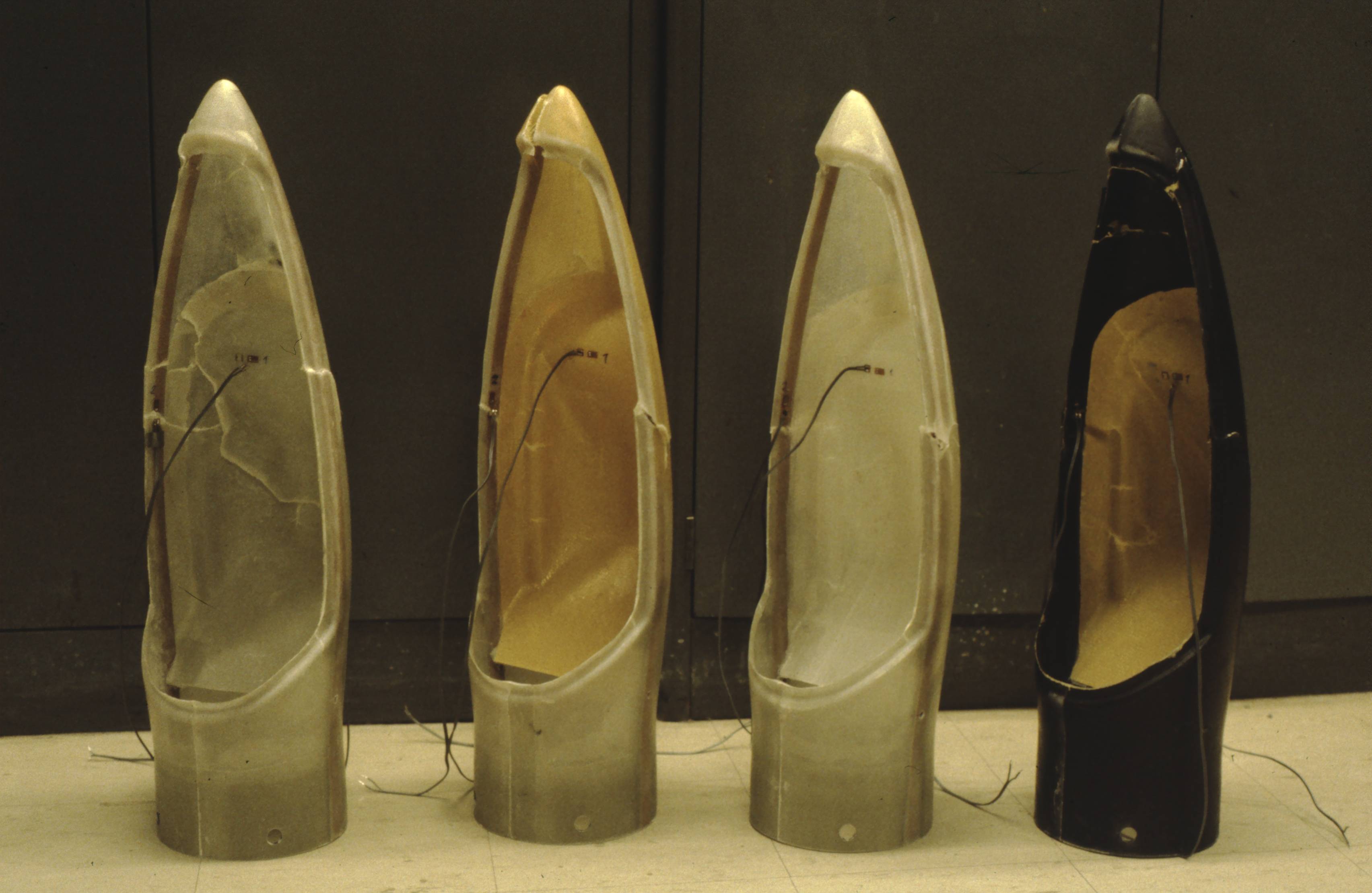 Lineup of some models (after the test). On the far right is a graphite shell with an aramide seat pan.

Those strain gages you see in the pictures were used to calibrate a FEM model using ADINA, a nonlinear code which allows for large displacements. Running the FEM model on a Microvax took days but produced very convincing results after I had measured the material properties of the materials employed in the models. Never use manufacturer-supplied data but gather your own!

The results were published in the Journal of Aircraft.

According to Wikipedia, its thermal properties are mediocre:

The weak bonding between olefin molecules allows local thermal excitations to disrupt the crystalline order of a given chain piece-by-piece, giving it much poorer heat resistance than other high-strength fibers. Its melting point is around 130 to 136 °C (266 to 277 °F),[8] and, according to DSM, it is not advisable to use UHMWPE fibres at temperatures exceeding 80 to 100 °C (176 to 212 °F) for long periods of time. It becomes brittle at temperatures below −150 °C (−240 °F)

which severely limits the choice of matrix for a hypothetical UHMWPE/resin composite.

In particular, the curing temperature of the epoxy resins typically used in aerospace applications are around 200°C, which would either require the use of a cooler-curing epoxy (with lower mechanical properties) or a different solution altogether.

So, as a partial answer to your question: yes, it could be used, but there does not seem to be a reason for it, as the readily-available composites have better properties for the use cases defined thus far.

Not the answer you're looking for? Browse other questions tagged aircraft-design aerospace-materials composite-materials or ask your own question.

18
Are composite materials, which are being widely used in newer aircraft, better at handling bird strikes?
7
What materials are used for aircraft windshields?
4
Were any composites used on the A340 series?
2
Is there a flexible "cloth-like" material that can be used as "skin" for a non-conventional wing?
6
Why don't short-haul regional jets go for composites?
4
What would be the impact of replacing the engines on the 737 MAX, not just reworking MCAS?
2
Can control surfaces for slow aircraft be 3D printed?